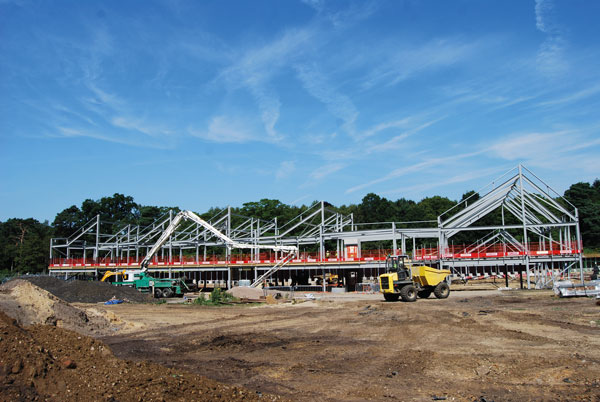 A primary school is one of the first assets to be constructed at Mindenhurst, a new community taking shape on former military land in Surrey.

This new era for the historic site is being delivered by Skanska on behalf of the Defence Infrastructure Organisation (DIO) and forms part of the wider Project Wellesley. This involves the construction of a new training facility at Worthy Down near Winchester (see box) that, in part, will replace Deepcut.

All military functions and personnel are being relocated in a phased programme, which is due to complete by February 2021. Once vacated, the remaining Army buildings will be demolished, with the exception of three listed structures, making way for further phases of the redevelopment scheme.

Currently, work is all being undertaken ‘outside the wire’ on land adjacent to the functioning military facility. So far, two parcels of land have been awarded to housebuilders with more to follow in the near future, on a scheme that Skanska expects to run until 2025. 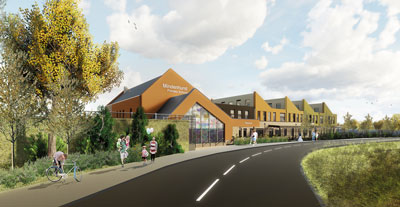 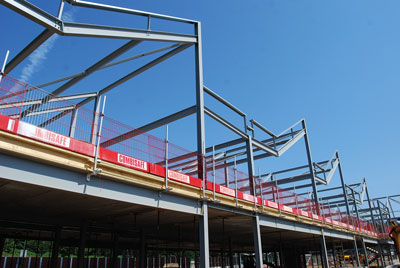 Known as Mindenhurst, the new community will boast village-style retail outlets, business premises, a pub, a community hall adjoining the site’s historic garrison church of St Barbara at Deepcut and a new primary school. The latter is already under construction and is due to take-in its first pupils in September 2020.

“The first homes are nearing completion and there will shortly be a need for the 420-capacity primary school,” explains Skanska Development Manager Peter Cater.

The T-shaped steel-framed primary school building has a distinctive design, as its main two-storey classroom block forming the T’s upright section is topped with a four-peaked saw-tooth roof.

“As a key piece of infrastructure, we wanted the school to be a signature building for the site, acting as a signpost to the development as it has a prominent position near to a new main road that we have built,” adds Mr Cater.

The saw-tooth feature not only creates a stand-out building, it also means the upper level of classrooms will have a higher floor-to-ceiling height and will be flooded with natural light as the vertical sections of the roof will have large glazed windows.

The roof is formed with a series of cranked south-facing rafters, with a bolted knuckle joint, that forms an inclined section from two separate steel members. Completing each saw-tooth ridge, the north side is formed with a single rafter that slopes outward and downwards to its supporting column.

Overall, the school will include two nursery classrooms with associated spaces that can be operated independently on the ground floor. Elsewhere, two reception and 12 more classrooms will be available to accommodate year one and two pupils on both the ground and first floors.

The ground floor is 2m wider than the upper level along the western elevation, allowing these classes to have more room.

Because of this longer span on the ground floor, the column line for this elevation’s first floor does not align with the lower level.

The first-floor columns are consequently supported on a series of box section members, acting as a transfer structure.

The 500mm × 300mm box sections each measured 8m-long and weighed 2.5t. These were the heaviest steel elements that steelwork contractor William Haley Engineering had to erect on the project.

The top portion of the T-shaped structure accommodates a large double-height space for two halls. These column-free spaces are both 12m-wide and will be separated by a moveable partition, allowing them to be used as one or two separate areas.

Adjacent to the hall is another two-storey zone, accommodating the school’s kitchen on the lower floor and a plant deck above.

Stability for the steel frame, which supports precast planks to form the upper level, is provided by bracing, located in corridors and partition walls.

“The decision to use precast flooring was all about speed of installation,” sums up Skanska Construction Director George Taylor. “William Haley erected the steel and all of the project’s precast units, which included a lift shaft, in just five weeks.

“Also, the overall design for this eye-catching structure could not have been done in any material other than steel, because of the shape and length of spans.” 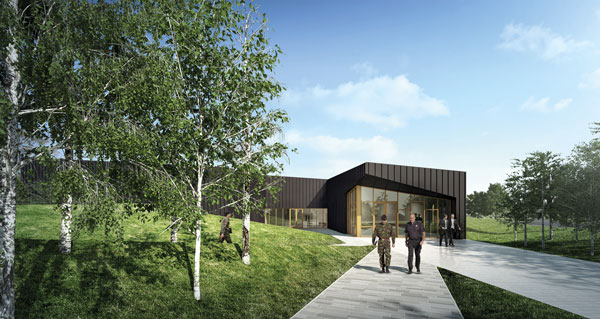 A total of 26 new buildings are being constructed by Skanska at Worthy Down, 14 of which are steel-framed structures.
Steelwork contractor William Haley Engineering has fabricated, supplied and erected approximately 2,000t of steel for these buildings during a phased programme that started in 2015.

The steel-framed buildings have included accommodation blocks, a combined sergeants’ and officer’s mess, retail and leisure facilities, a physical recreation and training facility and most recently an entrance building and museum (pictured), requiring 125t of steel.

The museum is a rectangular braced frame structure with a 2,130m² ground floor and an L-shaped upper level with 479m² of space. The lower level will accommodate a site reception, café and the main exhibition space, while upstairs there are offices, a plant area and a visitor walkway that will allow visitors to look down on the museum exhibits.

Commenting on the choice of a steel solution for the museum and many of Worthy Down’s other structures, Skanska Design Director Dan Bennett says: “Steel is ideal for the long spans required in these buildings and it was a more cost-effective solution compared to alternative structural solutions. Steel is also more versatile, creating complex shapes, while it is also relatively lightweight, resulting in smaller, more efficient foundation solutions.”