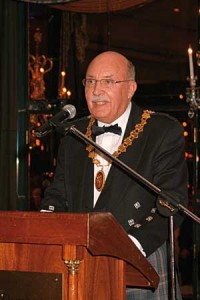 British Constructional Steelwork Association President Jack Sanderson said  the bottom of construction’s business cycle had now been reached and government statistics signalled a rebound in some sectors of the industry.

Speaking at BCSA’s National Dinner Mr Sanderson said: “As we all know the economic fortunes have changed dramatically over the past 18 months and most BCSA members have had to adjust their capacity accordingly. 2010 is likely to be another very difficult year, but hopefully we are now at the bottom of the fall in steel construction demand.”

Mr Sanderson said a significant victory was achieved by BCSA and its lobbying partners last year in successfully opposing the opt-out to the Working Time Directive. Another success was achieving payment terms amendments to the Construction Act contained in Part 8 of the Local Democracy, Economic Development and Construction Act.

Health and Safety was a key focus for BCSA efforts during the year. Mr Sanderson said:’Members have made a lot of effort to drive accidents and injuries down and I am pleased to report that accident data for 2009 shows the industry has met the target set by the construction industry and reduced reportable accidents by 66% in a ten year period.’

Mr Sanderson said he was pleased to announce the launch with Corus of the ‘Target Zero’ Design Guide for Schools.  This is a £1M sustainability project, produced by a project team led by AECOM with the aim of making steel intensive zero carbon buildings a reality.

Mr Sanderson said he is pleased that the Department for Communities and Local Government (DCLG) has postponed the amendment to Approved Document A – Structure until 2013, so national design standards will continue to be listed as acceptable methods of complying with the Building Regulations. The BSI committee responsible for BS 5950 has confirmed the continued use of BS 5950 until 2015.