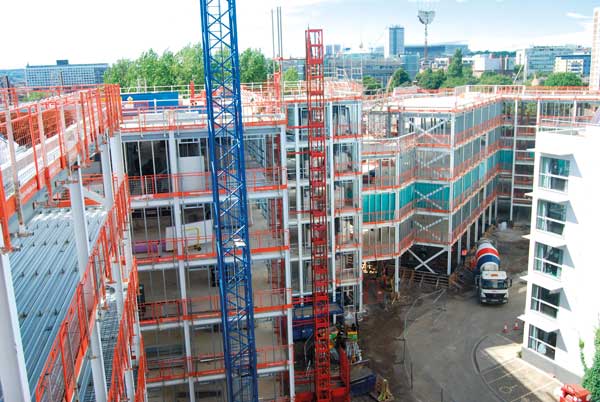 Three accommodation blocks in Newcastle are being built to a tight programme in order to satisfy the city’s increasing demand for student flats.

“This is a very constrained site, with roads and existing buildings surrounding us,” explains BAM Site Manager Ian Teasdale. “As every part of the project’s footprint is being built on we had to bring steelwork to site in scheduled deliveries with manageable loads that were sometimes erected straight off the delivery truck.”

Below ground one of Newcastle’s main sewers crosses the site and this important pipeline had to be bridged by 12m-long ground beams supported on piles positioned either side of the sewer. In order not to overload these foundations, and potentially damage the sewer, it was important the lightest framing solution available was used.

“Steel ticked all of the boxes because of its ease and speed of construction, and importantly as it is lighter than alternative concrete framing solutions,” adds 3E Consulting Engineers’ Steve Watson.

Being developed by a BAM Connislow joint venture, a developer set up to specialise in student accommodation, the project will help to alleviate the city’s need for more and better located student living space. 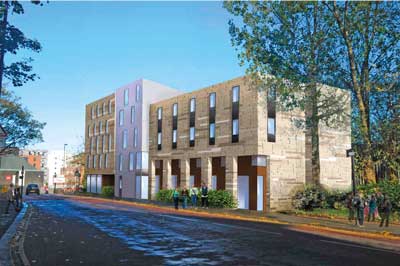 Visualisation of one of the completed blocks

Site plan of the accommodation blocks

Located to the east of Newcastle city centre the development is approximately 500m from Northumbria University’s City Campus East, and only a 15-minute walk from the Newcastle University Campus.

The scheme, which has been designed by Xsite Architecture, is set out over three blocks that rise to seven, six and five storeys respectively. Structurally independent, all of the buildings are formed into a close configuration, filling-up the site with only the narrowest of gaps between them.

Inside of the blocks, the accommodation will be a mixture of en-suite bedrooms with shared kitchens, and self-contained studio flats with their own cooking facilities, offering a total of 409 beds.

The North East division of BAM Construction started work on the £18.4M development in January and it is scheduled to complete the work next summer in time for the 2017/18 academic year.

Early works for BAM included the demolition of three industrial units that previously occupied the site before it could begin the groundworks programme. The steel frames are founded on piled foundations, and 40 of the piles had to be installed close to the major sewer that runs across the site.

“It was vital that we didn’t hit or damage the sewer during the piling works and to satisfy the authorities we had to install an underground camera during the installation of the 40 integral piles,” says Mr Teasdale.

The site previously sloped and in order to flatten the terrain one end of the site was dug out and a retaining wall installed. Block A is positioned at this end of the site and this structure is consequently the only building to incorporate a partially subterranean lower ground level.

Steelwork contractor Harry Marsh [Engineers] was able to begin the erection programme in May and the entire steel package, including the installation of precast cores, was completed in 13 weeks.

Speed of construction was an important criteria and in order to help keep the project on schedule the three steel frames were erected to full height using 20m-long columns. 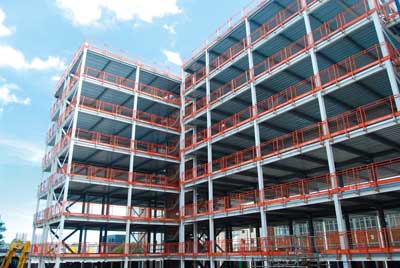 The frames are all stabilised with cross bracing, positioned in partition walls, around stairwells and close to the precast lift cores. The bracing meant that once a few bays were erected the structure was immediately stable and this allowed Harry Marsh to hand over each building to the follow-on trades when only half the frame was erected.

This helped the programme maintain its speed of construction as it allowed the metal decking and the concrete flooring to be installed more quickly.

“Logistics and interaction between the different trades are key to this job. There is little or no room on site and many trades working in sequence on the three buildings,” says Mr Teasdale.

“The steel erection programme was tight due to these space constraints, while the cranes had to carefully work into the corners and edges of the site.”

All of the three braced frames are built around perimeter column spacings of 5m, with internal spans for the accommodation up to 5.2m long. Each of the blocks has 2m wide centrally positioned corridors separating the accommodation wings.

Summing up Dougie Peters, Managing Director, BAM Properties says, “The BAM Connislow JV is delighted to be working on our second student accommodation project. We intend to develop more schemes in locations where there is high demand from students. Our advantage is that we can draw on the development, design, construction and facilities management expertise in BAM as well as the specialist funding expertise of Connislow to develop effective schemes that will be attractive to students.”