Posted on April 6, 2017 by NSC in Projects and Features, This month's featured stories 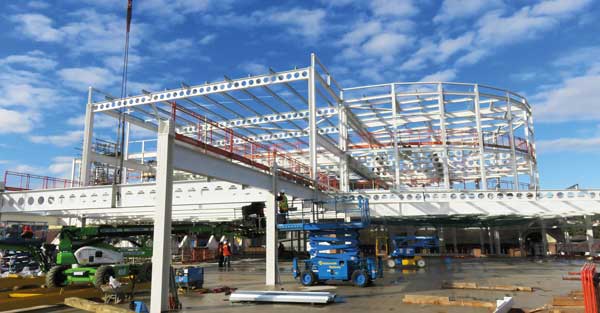 Reinvigorating a large centrally-located plot, the scheme consists of a new Sainsbury’s store with a two-level car park above, a gym and a 68-bed Travelodge hotel, all housed in one large interconnected steel braced frame.

Sainsbury’s is playing an integral role in the project as the retailer is more than just the client. It has occupied part of the site for many years, albeit in a smaller store than the one being built, and importantly it is maintaining a presence throughout the construction programme.

In order to keep the Sainsbury’s store open, the construction and demolition programmes have been phased. The initial stage, which was completed last year, involved the demolition of an office block known as Lombard House, which occupied approximately half of the site.

RG Group Retail Manager Mark Smith explains: “Once this building was demolished we had room to start building part of the new steel frame, which consisted of the front portion of the new Sainsbury’s store, a gym and parts of the new two-level car park.” 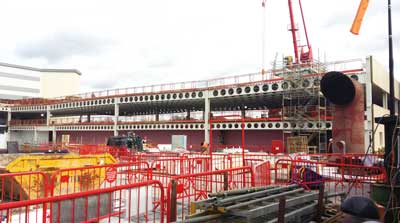 Construction continued above and adjacent to the store 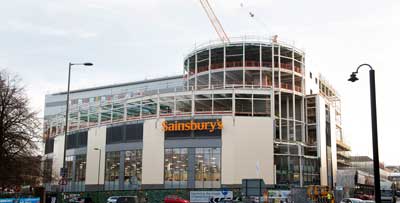 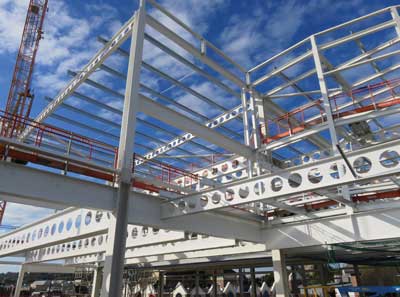 Westok cellular beams have been used throughout to create long spans

Sainsbury’s decamped into this portion of its new store last August, which then allowed phase two of the scheme to kick-off.

A temporary wall separates the open store from the ongoing works, while temporary bracing has also been added to this frame as it will not be entirely self-sufficiently stable until the entire scheme is built and the larger phase two has been connected up.

Once complete both parts of the new store will form one large new retail zone, incorporating a mezzanine level for a café.

“After they had moved into the front portion of their new premises we were able to begin demolishing the old store and then start erecting the rest of the new steel frame,” adds Mr Smith.

The phase two steelwork programme consists of the remainder of the new store at ground floor level, the mezzanine deck restaurant level, the rest of the car park and the hotel.

A third phase of steelwork erection involves the construction of the car ramp.

Keeping Sainsbury’s open on the site is not the only logistical challenge the project team has on this scheme. Below most of the plot’s footprint is an underground car park, an important town centre asset which is being kept open throughout the construction works.

During the demolition phase this concrete basement car park and its roof – the ground floor slab – was retained and these elements are being incorporated into the new scheme.

All of the demolished structures on the site were concrete-framed, while the entire new build is steel-framed. The choice of steel was made primarily because a lightweight solution was required so that the existing substructure and foundations could be reused.

“We are constructing more floors than the original structures so some strengthening works have been undertaken to the original reinforced concrete structures, such as columns and foundations. This work has meant a phased closure of some parts of the car park,” explains GD Partnership Director Rudy Djajasaputra.

While this work has been carried out the project team has had to maintain a minimum of 155 parking spaces in the basement car park at all times.

Steel was also chosen because it is quick to erect and creates flexibility within the building. Within the phase one area, the Sainsbury’s store has a 9m floor-to-ceiling height, high enough to allow another floor to be added if the tenant so wished.

Once phase two is complete the new Sainsbury’s store will have approximately 6,000m² of retail space, up from 2,300m² in the old premises. The store has been built using a series of 16m-long Westok cellular beams, supported on columns spaced at 8m centres.

The store’s grid pattern corresponds to the existing basement car park grid and for ease of design and continuity, the same column spacings have been maintained for much of scheme.

Above the Sainsbury’s store the two-level car park has the same steel 16m × 8m grid pattern as does the gym, which is positioned above the front (phase one) part of the store.

As well as the new build elements of the scheme, another key benefit of the redevelopment are the public space improvements that will be introduced to the pedestrianised area of London Road, which runs along the western side of the site.

The project has provided a new steel canopy entrance to the adjacent Harlequin Theatre and Library, as well as new seating, planting and paving.

The entire Sainsbury’s store is set to open this summer, with the Warwick Quadrant redevelopment completing later in the year.

Car parking is an important feature of the Warwick Quadrant scheme; the existing car park dictates the primary structural grid and the new scheme incorporates a car park above the retail outlet. Even without the constraints of the existing structure at Redhill, long spans are a preferred solution for car parking. Long spans allow a degree of flexibility with the circulation within the facility but, more importantly for the user, result in a light, airy environment with minimal internal structure, which serves to enhance a feeling of security.

For car parks not constrained by existing structure, there is plenty of design guidance on optimum layouts. These include split level and flat deck solutions with different circulation patterns possible, which may be selected to suit the intended use characteristics. Ideally, inward traffic covers as many parking bays (’stalls’) as possible, and is separated from outward traffic. This means that empty stalls can be found rapidly and users can exit with minimum frustration. Clear spans are generally around 16m (as at Warwick Quadrant), being based on two parking stalls 5m long and a 6m aisle for passage of cars. Intermediate columns at the edges of the aisle are generally unwelcome, as they can impede parking manoeuvres. Stall widths are generally based on multiples of 2.4m, with some allowance for the structure.

Typical floor solutions are available to the designer (see steelconstruction.info), including primary beams, secondary beams and columns, leading to an approximate weight of steel per space for use at initial estimate stage. The construction depth varies with the solution, but based on a 16m × 7.2m grid and an imposed load of 2.5kN/m², the typical construction depth ranges from 575mm to 950mm. Floors may be precast units or composite slabs constructed from profiled steel decking. Generally, beams will be designed as composite members, and longer spans will be precambered.

Corrosion protection will be an important consideration, since a car park environment is particularly hostile. In addition to appropriate protection of the steelwork, careful attention must be paid to the drainage arrangements, crack control and the application of protection to the top surface of the slab. Dynamic performance is generally not a critical design consideration, as studies of existing car parks have shown that ensuring the natural frequency is greater than 3Hz is appropriate.