Posted on July 30, 2020 by NSC in Projects and Features, This month's featured stories

A steel framing solution has provided a new retail development in Carlisle with the required open-plan floor space and a quick construction programme.

Located adjacent to Junction 44 of the M6, Gateway 44 is an extension to the city’s existing Kingstown Retail Park, which currently includes a number of popular outlets such as Asda and M&S, alongside a Premier Inn hotel and car showrooms.

Commenting on the scheme, Leader of Carlisle City Council, Cllr John Mallinson, said: “Carlisle is a growing city and this new development will create more jobs and will provide a boost to the local economy. We encourage other retailers and businesses to invest in Carlisle. The city has a lot to offer and is an ideal location for established and new businesses.”

Main contractor Caddick Construction began work on the previously greenfield site in February. After a groundworks programme, which included the installation of ground-bearing pad foundations, the steelwork erection was able to begin within a couple of months. 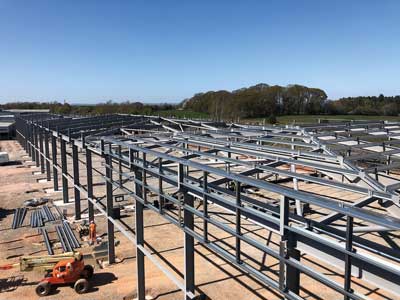 A portal frame design offered the project a number of benefits, including the desired column-free spaces. 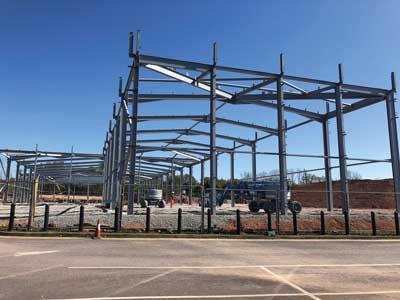 Caddick Construction Contracts Manager Derek Billows said “The team is delighted to have been appointed on this project to work with Carlisle City Council. This is a further boost for our new Kendal office following the recently completed Mercedes Dealership in Carlisle and the JLR Dealership in Kendal along with the ongoing development of a Blue Light Hub for Cumbria County Council and the recent award of the Kendal town hall redevelopment, all of which indicates that the future in the county looks good.”

The entire development consists of one large steel-framed structure, next to a smaller frame to house the Costa drive thru. According to the project architect, the choice of a steel framing solution was a simple decision.

“A steel frame was the preferred method of construction as it allowed us to maximise floor area and minimise construction time on site,” says Fletcher Rae Senior Architect Andrew Thompson.

Steelwork contractor Border Steelwork Structures (BSS) has erected a total of 217t for the main retail structure and a further 19t for the drive thru.

The main retail building is 127m-long with a maximum width of 40m and a height of 10.2m (9.4m-high to parapet). Structurally, it is three distinct, but inter-connected, portal-framed sections with hipped ends.

Stability for the main building is achieved via portal frame action in the transverse direction, and by pinned braced frames in the longitudinal direction. Lateral loads in the roof are transmitted via plan bracing to the main stability elements, with vertical bracing down into the ground.

Explaining the steel erection sequence for the main structure, BSS Contracts Director Stuart Airey says: “The structure was erected as a normal span portal, whereby we erected the gable end steel and three columns up each side and then tied it in with bracing and tie beams.

“We then spliced up the first pair of rafters on the ground and lifting them to connect to the columns. We then erected the hip rafters and bracing and continued with the sequence over again.”

The erection process was completed using a single 55t-capacity mobile crane in conjunction with three MEWPs.

Most of the retail units are typically open to roof, thereby offering just a ground floor level, although there is scope to add extra mezzanine floors, which two units already have.

Meanwhile, the building’s column bays vary between 6m-wide and 7.5m-wide.

Other than the main frame, another notable and highly visible steel element of the main building is a full-length canopy to shop front, which forms a concourse. The canopy rafters are fixed back to the main structure with thermal break connections.

As well as fabricating, supplying and erecting the project’s steelwork, BSS has also supplied and installed roof and wall cladding. Different lifting equipment was needed for this part BSS’s package. For the roof cladding, the company used a five-axle mobile tower crane due to the limited access around one of the perimeter elevations, while a 40t-capacity mobile crane was brought to site to install the wall cladding.

BSS will complete its work in August and Gateway 44 is due to be completed in the autumn.