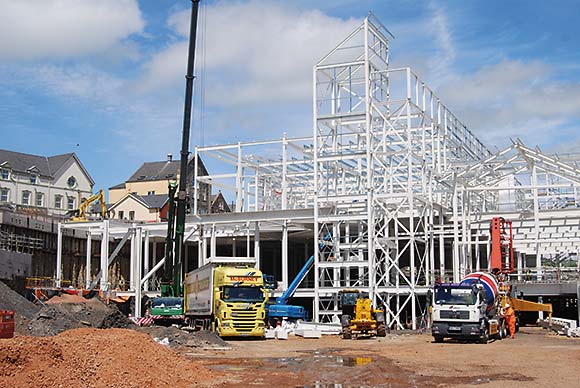 Situated on a large embankment, a new retail development is dependent on a large steel truss to not only provide the necessary shopping space, but also the stability to an adjacent piled wall.

The former South Wales mining town of Bargoed is in the midst of a £30M regeneration scheme, a programme that aims to revitalise the community and bring new job opportunities to the area.

A new relief road and connecting viaduct, as well as a bridge over the Rhymney River have recently been completed, improving transportation links and removing traffic from the previously congested main streets of Bargoed.

Central to the overall plan is the rejuvenation of commerce and this will be achieved with a large scale retail development, based around a 5,200m² Morrisons supermarket being constructed in the town centre.

Known as the Retail Development Plateau, the 2.2 hectare site is situated on a 300m long × 20m high reinforced embankment, said to be the largest of its type in the UK.

The plateau over looks the Rhymney River valley and backs onto Bargoed’s main shopping street. The plateau was cut into the hillside by main contractor Simons, a job that saw 23,000m³ of spoil to be excavated and removed.

The face of the cutting is formed with a contiguous piled wall, 11m at its highest and 130m long. This had to be reinforced with temporary anchors during excavation.

Steelwork contractor Caunton Engineering has a design and build contract for this project and it designed the structural frame to support the piles.

“The temporary anchors have to remain in place until the steel frame is complete and the concrete decking is on, then the diaphragm action will also help to support the wall,” explains David Wilson, Simons Senior Project Manager. 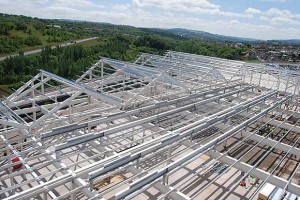 A series of portals crown the development 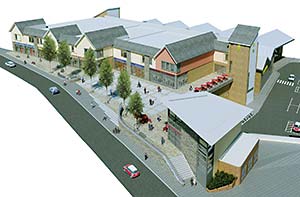 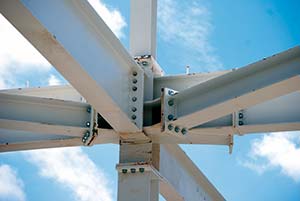 In order to allow the completed steel frame to resist the loads from the piles, a 24m deep horizontal truss has been installed and concealed within the project’s retail floors.

The truss spans the full length of the wall and is connected into it via cast-in plates. The massive loads from the wall will be transferred through the truss via a series of large welded nodes, some of which have up to 14 incoming members.

“We had to design the truss and the nodes to absorb up to 700kN/m,” explains Matthew Shimwell, Caunton Engineering Lead Designer. “The nodes also simplified the overall steel design and the fabrication detail.”

The nodes also enable the truss and the steelwork to follow the sloping topography of the external retail deck. The site has a slight slope which follows the height of the retaining wall. In order to keep the steel frame in line with the wall, each floor level is stepped and the sloping horizontal truss fits within these floors.

Brought to site in individual sections, the truss was erected along with the rest of the project’s steelwork, with no steel element weighing more than 3t.

For the steel frame and for the erection programme it has had two mobile cranes working on site. The cranes are also being used to install the precast floor planks and the stairs.

“As we already have the craneage on site it makes sense for us to install the planks and stairs,” comments Andrew Austen, Caunton’s Site Manager. “It also means there are less trades on site which speeds up the erection programme.”

Sitting on top of the plateau and abutting the retaining wall, the steel framed retail development consists of a lower level undercroft car park for 400 vehicles, with the main Morrisons retail floor positioned above along with second car park level.

Above the main Morrisons supermarket floor are a series of further decks, set back from the valley elevation, accommodating independent retail outlets and rooftop plant areas.

The retail outlets will be accessed via Bargoed’s main shopping street – as they sit on the retaining wall, consequently providing a continuation to the existing shop frontage and enhancing the town centre.

The majority of the frame is based on a 9.5m × 7.5m structural grid. This was deemed suitable and large enough not only for the car park but also the retail levels above. The exception is the area where the lower level car park has the first floor level outdoor parking area above, here a large 16.5m × 7.5m grid has been accommodated.

The main Morrisons retail area is topped by a series of portal roof frames situated along the elevation overlooking the valley. These feature elements provide a signature to the development, as this part of the scheme will be the most visible to people approaching the town.

Helping the project to progress seamlessly, the job has been fully managed and constructed using Building Information Management (BIM). According to Andrew Watson, Caunton Engineering 3D Project Coordinator, this enabled architect’s and engineer’s models to be fully integrated with Caunton’s steel detail and design models.

“This helped the development process on the project and allowed complex geometry and data to be easily transferred among the team. Design meetings were far more productive as we could take integrated models and present them on site to solve problems quickly.”

Summing up the project, Welsh Government Housing, Regeneration and Heritage Minister Huw Lewis says: “Town centre renewal is a key priority and I am delighted to support this development which will help breathe new life into Bargoed, support new and existing businesses, stimulate the local economy and provide jobs in the retail sector.”

The development is due to open in early 2014.

The use of fabricated nodes in the Bargoed supermarket development 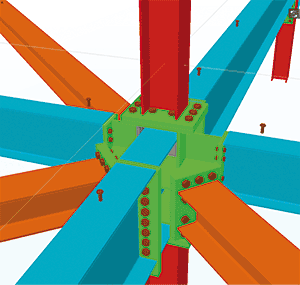 An early scheme for the restraint of the contiguous piled wall involved permanent rock anchors which however could not be relied on for the life of the development. Controlled transfer of load at construction stage was a more reliable option than transfer on failure of the anchors at some unpredictable future date. The truss in the plane of the retail floor steelwork is therefore designed to support the piles in the permanent condition.

The truss spans about 85m with the depth between booms of over 16m: two bays of floor beams.  The bracing members are cruciform in arrangement such that some bracing members resist tension and others compression (Figure 1). The truss is designed for stiffness and the mid-span deflection is limited to about 50mm. The shear forces are transmitted to the ground at each end through vertical tension only bracing which also provides the wind restraint to the development. Piles and 15m square pile caps resist the tension forces.

Two lines of retail floor beams act as the truss booms and consist of 914, 838 and 762 UKB serial sizes. The retail floor slopes slightly across the site and the slope is accommodated by stepping the beams at points away from the principal nodes in the truss. At the changes in level, the beams are designed for the bending moment due to the eccentricity in the line of the axial force. The bracing members, all set in one plane, are formed from UKC sections of 305 serial size, also with their webs vertical. The approach taken to detailing the truss was to concentrate the fabrication in the nodes and make the elements as simple as possible.  This approach resulted in truss elements with extended end plates for bolted connections, detailed with shims to allow for erection tolerances. Fasteners are mostly M30 and M36 grade 8.8 bolts.

The truss nodes were designed to carry the forces efficiently in direct tension and compression and avoid bending. The truss boom forces are carried by stubs of the same shape. Horizontal stiffeners are placed in line with the flanges of the incoming diagonals. Column elements are spliced above and below the nodes and the flange forces carried through vertical stiffeners. Mating end plates and cap and base plates are provided for each incoming element (see Figure 1).