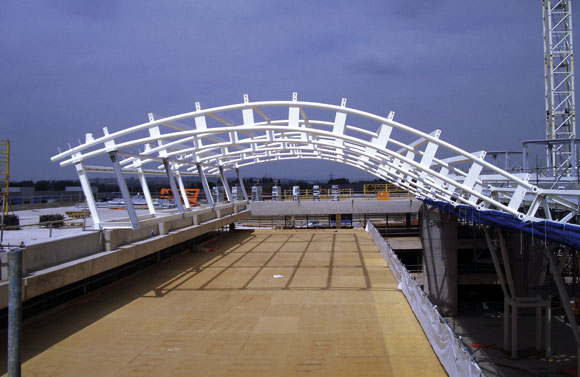 A sculptural gull wing roof will be a landmark feature of the Gloucester Quays development. Covering the central courtyard of a new designer outlet, the innovative glazed structure required 250t of steel.

Teamwork played an important role during the initial design stages for the eye-catching gull wing roof that will top a designer outlet’s central courtyard at the multi-million pound Gloucester Quays redevelopment project.

Adey Steel, working on behalf of English Architectural Glazing (EAG), has undertaken the design, fabrication and erection of the steelwork roof structure on a ‘design and build’ contract.

“Working together during the early stages was integral to ensuring that the concept design of the roof structure matched the architect’s vision,” explains Jeremy Czarnocki, Adey Steel Managing Director. “It’s a complex design, with a number of interfaces with other trades, so we worked closely with the team to agree the design philosophy and the key details before proceeding onto the detailed design stage. An example of a key interface detail was the design of the roof supports, which had to accommodate the main structure’s movement joint that ran across the roof’s position”.

The design and detailing took three months to complete and Adey Steel produced a Masterseries analysis model, together with a Tekla 3D drawing model that incorporated the steel, glass and concrete elements of the roof. The 3D model allowed EAG and the architect, Dyer Associates, to view the structure and make any comments, or alterations, at the early concept design and detailing stage.

“Given the number of interfaces with other materials, it made sense to incorporate all the key building elements into the 3D model,” says Neil Smith, Adey Steel Operations Director. “The 3D model then enabled us to review key details with the architect and give suggestions that didn’t undermine the aesthetic appearance of the structure”. 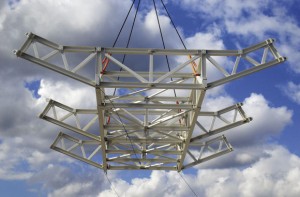 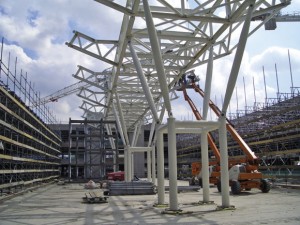 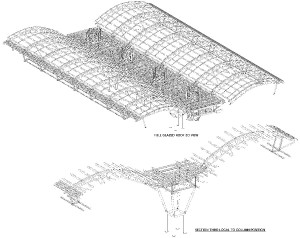 A wire frame model of the gull wing roof

Once the design process had been satisfactorily completed, Adey Steel had an 8 week lead-in period, prior to starting work on site. Once on-site, the entire steelwork was erected in just 10 weeks.

Erection of the roof steelwork was aided by the fact that the majority of the designer outlet and its car park had been completed, allowing the steelwork team to store and pre-assemble large sections of steelwork on the adjacent car park’s uppermost level.

Surrounded by the car park and spanning the designer outlet’s inner courtyard, the roof measures 60m long by approximately 40m wide. The structure is principally supported by three podium legs, on a central slab, with four concrete cores – two at either end – providing additional stability.

The first items to be erected were the two end support trusses; each truss was fixed to the face of the two concrete cores at either end of the roof. “The bolts securing these end trusses pass through the concrete core walls and are clamped at the rear to facilitate the load transfer from the trusses into the cores,” explains Mr Czarnocki.

The three podium leg assemblies were then erected. These support assemblies consist of four 323mm CHS legs forming a table-like structure, which then have four 5m long cigar-shaped tapered arms extending up to the roof structure. There are feature pins at either end of the tapered arms.

The central spine is formed by an 8m wide box truss with connections for the gull wing trusses at either side.  Each piece, weighing up to 14t, was lifted by the tower crane from the car park roof to its final position. “Given that the roof structure was supporting glass, achieving the required tolerances was essential. The temporary works, and certain key connections, were designed to allow the spine truss to be adjusted as necessary,” explains Mark Whelband, Adey Steel Design Manager.

Utilising the adjacent car park roof proved to be invaluable for steelwork erection and as a lay-down area. The overall site is tight and lacking available space for materials to be stored, so lifting the steel to the car park’s roof and then pre-assembling steel elements before lifting them into position is credited with speeding up the erection process.

Supported within the spine trusses are four windcatcher units that will provide a continuous air flow to the shopping malls. During the design stage the movement and potential sway resulting from these units also had to be accounted for.

The next stage of the steelwork erection focused on installing the trusses which form the eye-catching roof gull wings. These sections, each measuring 17m long x 7.5m wide, have three separate radii and are formed using 168mm diameter x 12.5mm thick CHS sections. The top/bottom booms are separated by a series of 30mm thick x 350mm wide diaphragm plates to create a vierendeel truss. Internally the gull wings are connected to the spine truss, whilst externally the wings are connected to a concrete plinth that sits on top of the car park roof.

Finally, the glazing support purlins were installed.  These purlins comprise of RHS hollow sections, both longitudinally and transversely, with hidden connections utilized along the main longitudinal purlin lines.  Prior to fabrication, a sample roof node, comprising the purlin connections onto the gull wing trusses, was fabricated to ensure that the finished article would match the design intent.

As well as the main roof structure, Adey Steel has also installed a further 50t of structural steelwork for the roofs of four pedestrian walkways. Providing access from the car park into the designer outlet, the smaller of these walkways was also pre-assembled on the car park roof and lifted into position in one piece.

“By working this way, we maximized the use of the available tower cranes, minimized the disruption to other trades, and most importantly, ensured the steelwork was erected in a safe and efficient manner,” sums up Mr Czarnocki.

The changing face of Gloucester

The Gloucester Quays project is a major £400M mixed use regeneration scheme based around the city’s historic waterways. The overall project occupies 60 acres of largely industrial land and derelict buildings at the northern end of the Canal Corridor, straddling both sides of the Gloucester and Sharpness Canal. As well as the 18,000m² designer outlet and car park, the project includes waterfront bars, cafes and restaurants; leisure facilities; an 80 bed four star hotel; a Sainsbury’s supermarket; offices and 1,000 new homes.