Posted on November 9, 2017 by NSC in Technical, This month's featured stories 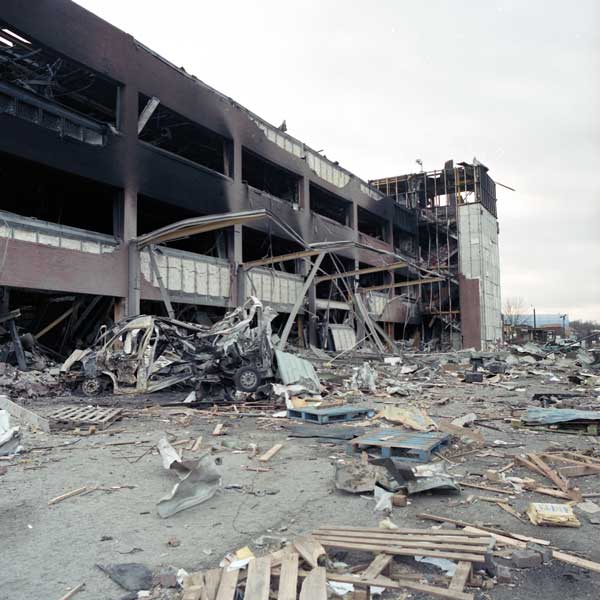 Bassam Burgan of the SCI discusses the design of low to medium rise buildings against external explosions and SCI’s forthcoming design guide.

Blast caused by industrial accidents
The chemical and petrochemical industries process substances that are essential to our lives (e.g. mineral fertilizers, fuels and pharmaceuticals). Under certain conditions, such substances may be flammable, explosive or toxic. These industries continuously strive to improve the safety of their manufacturing processes and today, they are amongst the safest industrial sectors. However, when accidents happen, they can impact not only the industrial facility itself, but also its neighbourhood, sometimes extending several miles from the accident site. Major high profile incidents such as Flixborough, UK (1974), Seveso, Italy (1976), Bhopal, India (1984), Shell Norco, USA (1988), Phillips Pasadena, USA (1989), BP Texas City, USA (2005), Buncefield, UK (2005), Caribbean Petroleum Corporation, Puerto Rico (2009) and Indian Oil Company, India (2009) demonstrated the loss of life and property and the environmental, economic and reputational damage that can be caused by such accidents.

Blast wave interaction with building structures
Both shock and pressure waves result in a “global” action on buildings at adjacent sites. The response of a building to blast is influenced by the magnitude, rise time and duration of the blast wave and there is strong coupling between the action and the building due to reflection and diffraction effects. Once the envelope of a building fails, pressure distribution can be amplified by multiple reflections inside the building and building elements, such as floors, are exposed to upward pressure, an action for which they are not normally designed.

Figure 3: Pressures due to incident and reflected shock wave

Blast wave interaction with a building structure was studied in a recent SCI led European project in which experimental studies quantified the nature and distribution of the blast actions on a typical “out-of-town” office building (reference building) – see Figure 4. The tests were performed on two 1:60 scale models of the building, one solid and one with openings to investigate blast wave interaction with the building floors and walls within the building. The scale models were tested at different angles of incidence of the blast to determine the variation in the reflected pressure as a function of the angle of incidence. The results were also used to assess the accuracy of analytical equations used for calculating blast action and for providing guidance on numerical (computational fluid dynamics) modelling of blast actions.

Response of building components and whole building to blast
Large scale blast tests were also performed on building elements and sub-assemblies including masonry and composite cladding, simple beam-column connections and composite floors. The purpose of these tests was to study the transfer of blast actions from the envelope to the frame of the building and the performance under blast action of building elements such as floors and connections. The results were used to validate detailed numerical models and carry out numerical parametric studies. Based on this work, sub-models (a component connection model and a 2D flat shell element for the composite slab) were calibrated and used in whole building finite element models. The whole building model enabled the behaviour of the reference building under a series of explosion scenarios to be studied, identified failure modes and was used to propose retrofitting strategies.

New SCI design guide
The project led to the development of a new SCI design guide which provides recommendations and advice for the structural design of low to medium rise steel-framed buildings (typically two to five storeys high) subjected to blast action due to external explosions. Step-by-step methods are given for the calculation of the resultant blast action on a building as a result of the interaction of the blast wave with the building elevations.

Guidance is given on the calculation of material properties to be used in the design of members. Yield stress design values are increased by a static increase factor to account of the fact that the actual yield strength of the common grades of steel (up to S355) is frequently greater than its guaranteed minimum value by more than 25%. This reduces conservatism in a design situation which involves an accidental combination of actions and ensures that the forces and moments transmitted from members to connections are not underestimated. To avoid failure of the connections, the static increase factor is not applied to the connection components. This is similar to the approach adopted in BS EN1998-1 for capacity design.

The mechanical properties of structural steels are affected by the rate of load application. The guide therefore recommends values to account for the increase in yield and ultimate strength due to the dynamic nature of the blast action.

The response of the building frame members is verified by reference to deformation limits (both deflection and rotation) which correspond to different damage levels. These depend on member type and slenderness and on the nature of loading acting on the member. Connections are also verified by reference to rotation limits. To ensure overall frame stability, inter-storey drift and frame member rotation limits are imposed.

Member capacity checks are performed in accordance with BS EN1993-1-1. This is modified in some cases to allow for the large deformations that may be tolerated in the case of blast response. Furthermore, the verification of columns in braced bays is modified as per BS EN1998-1 to ensure that the columns can resist the additional forces transmitted to them by the bracing members.

Design examples
The design guide is illustrated by a series of design examples based on the reference building. They include two explosion scenarios of different severity and the design verification of (a) a lintel supporting building cladding, (b) a composite floor and (c) the overall assessment of the building frame and the redesign of the bracing and columns to resist the more severe of the two blast scenarios.

The project was funded by the European Union’s Research Fund for Coal and Steel (RFCS) under grant agreement no. RFSR-CT-2013-00020 and the UK Centre for the Protection of the National Infrastructure (CPNI).