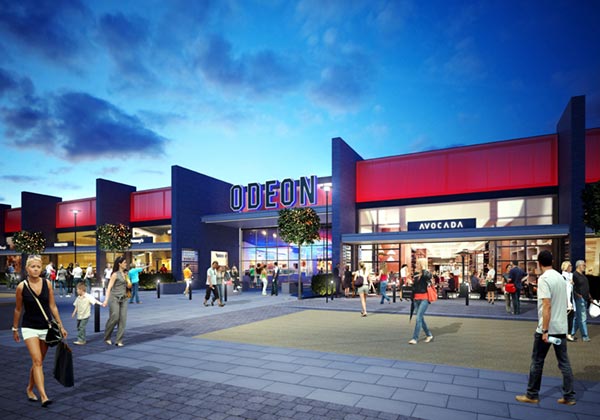 A cinema complex containing 11 screens and seven restaurants has relied on steel’s long span qualities and speed of construction to complete on time.

The project developer is Inter MK, owned by MK Dons football club Chairman Pete Winkelman, which has received the £25M funding for the 11-screen complex from Crown Estate.

As well as the football stadium, the park already boasts a number of popular retail and food outlets. Mr Winkelman says: “The project will strengthen the overall site’s reputation as one of the most popular leisure destinations in Milton Keynes and the wider region.”

The complex, which is aiming for a BREEAM ‘Excellent’ rating, consists of two interlinked steel-framed structures, one portal framed, accommodating seven restaurants and the entrance to the cinema, and the other a braced structure, located directly behind, that will house the cinema. 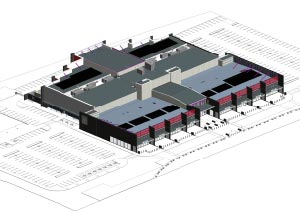 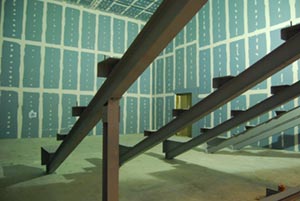 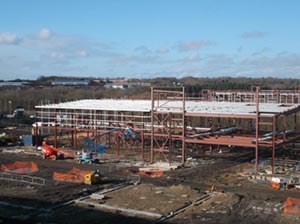 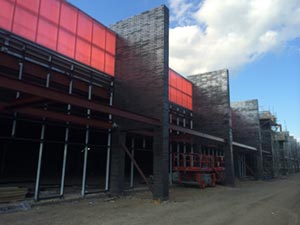 “We have designed the steel frame to meet the specification and developed the frame to be as efficient as possible,” says Colin Stewart, BHC Technical Manager. “We have reduced the size of members where possible and ensured that the steel sections both work to their capacity while meeting the specified performance criteria.”

The portal framed portion of the building, which is approximately 103m long × 31m wide, will accommodate seven restaurants. The outlets are arranged in a row of three and four on either side of the cinema’s main entrance and foyer.

The slightly taller braced frame of the cinema complex is separated from the portal frame by a service corridor that runs along the rear of the restaurant units. The cinema has an irregular grid pattern as it accommodates 10 screens with varying capacities up to 286-seats, arranged around a larger 373-seat IMAX screen auditorium as well as the main foyer.

Above the centrally located foyer there is a 733m² mezzanine level which gives access to all of the screen’s projectors as well as access to the roof plant equipment, supported within the plant well above.

BHC’s steel erection was then able to start at the beginning of this year.

“Steel erection had to be undertaken with a fair amount of coordination and planning because we had already installed the ground floor slab supporting piles,” explains Simon Fokes, McLaren Construction Project Manager. “We had to manage site logistics and traffic, and avoid placing cranes on top of the installed piles.”

The first part of the complex to be erected was the centrally positioned IMAX screen.

“This was the starting point for our steel programme as the IMAX is a fully braced box and once it was up it was fully stable and we could erect the rest of the cinema screens around it,” says Bobby McCormick, BHC Project Manager.

The cinema part of the complex is a collection of individual braced boxes, 11 in total, all connected into one large all-encompassing braced box, says Mr Stewart. The IMAX screen is the largest and tallest of these boxes with an internal clear span of 19.5m.

This box is formed with a large 2.5m deep truss positioned at one end that supports the high roof over the IMAX, as well as supporting the low roof and plant equipment above the mezzanine from its bottom boom.

Using two mobile cranes BHC erected the cinema steelwork with two erection gangs working outwards from the IMAX. The other 10 cinema screens vary in size with spans of up to 11.7m.

Perimeter columns for the cinema are all around 14m-high to suit the parapets and are spaced at regular intervals. Internally it is different story, as the cinema consists of individually braced boxes, with each box housing a single screen, the grid pattern has to incorporate them accordingly and so the pattern is highly irregular.

The main foyer is centrally located and is another column free area with spans of up to 13.7m. A series of transfer beams, positioned in line with the main entrance and extending into the foyer’s perimeter, support the mezzanine floor.

Once the cinema area was erected BHC then started on the portal frame restaurant section, allowing McLaren to start the cladding and roofing of the completed parts of the frame.

Externally the cinema is predominantly clad with profiled steel composite panels, while the restaurants are brick clad. Each restaurant is separated from its neighbours by protruding fin partitions formed around two steel braced columns. As well as creating feature partitions, the fins also provide support to a steel canopy that extends along the entire elevation.

Construction work on the MK1 Leisure Park cinema complex is scheduled for completion this month (September), with an internal fit-out programme beginning immediately. The complex should be open to the public by February 2015.