The construction of the Shard, Europe’s tallest, and first major mixed-use building has been dominating the London skyline for some months. Martin Cooper reports from a record breaking structure in the making. 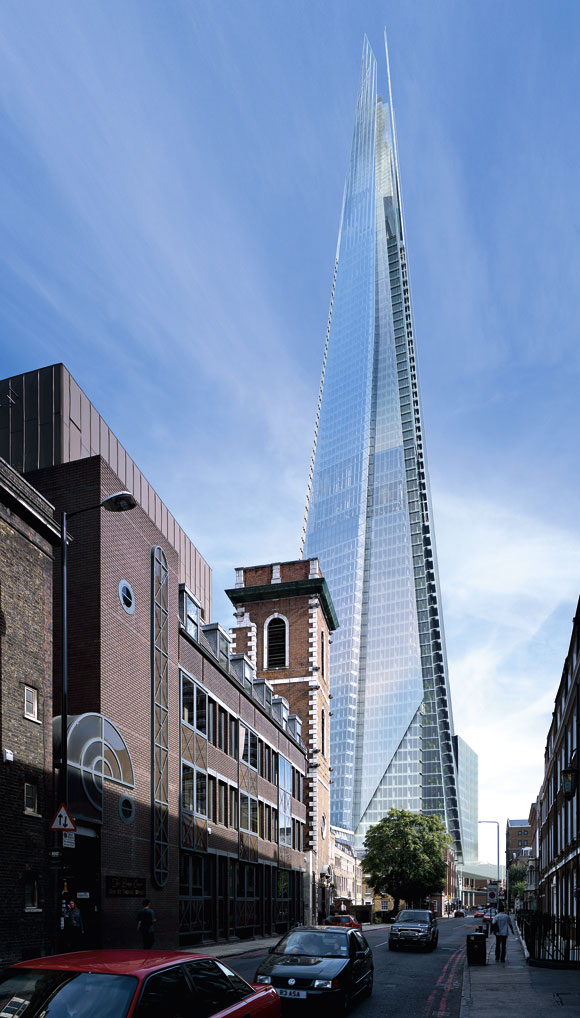 Completed in time for the London 2012 Olympics, the Shard will present a stunning backdrop to the Games 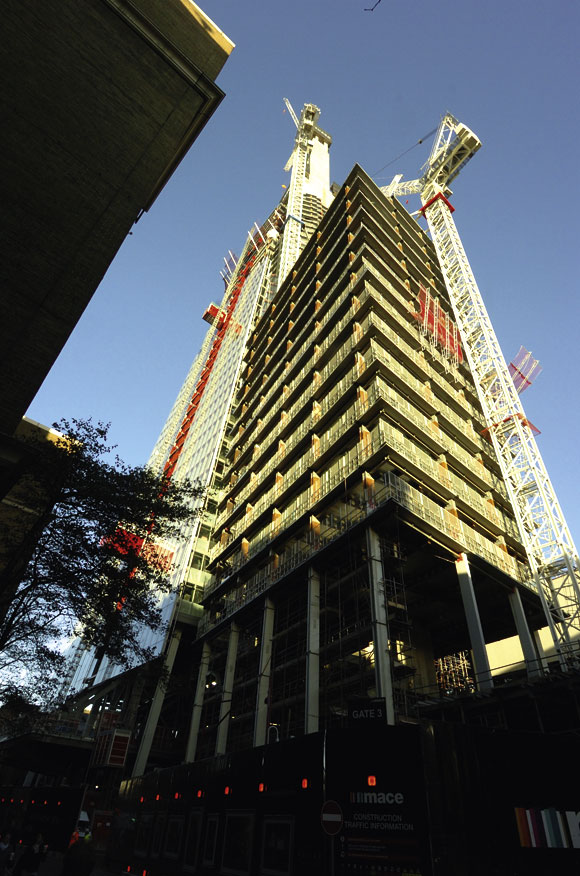 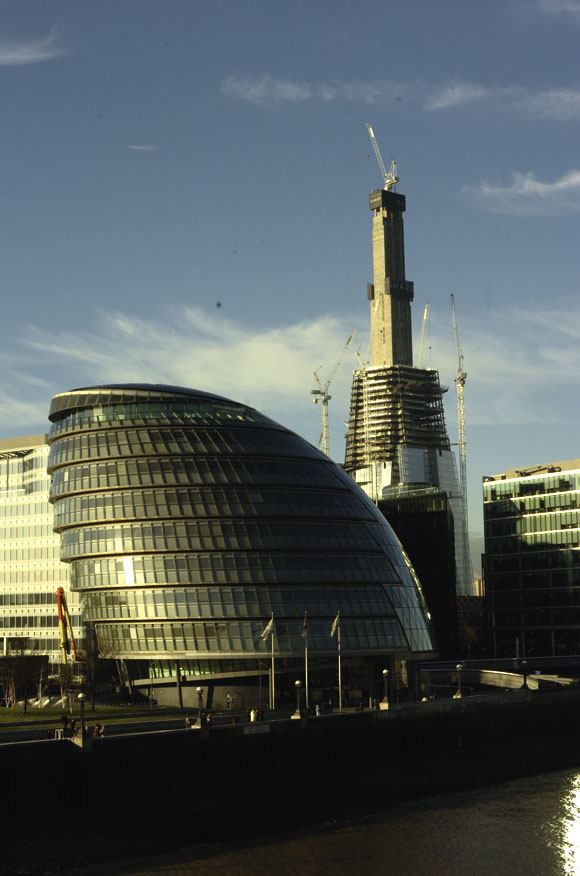 The completed building will provide jobs for approximately 12,500 people 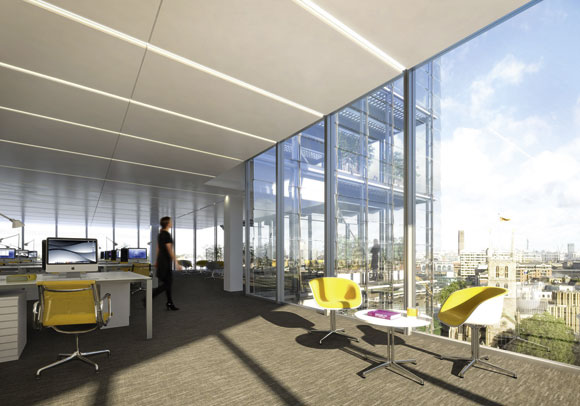 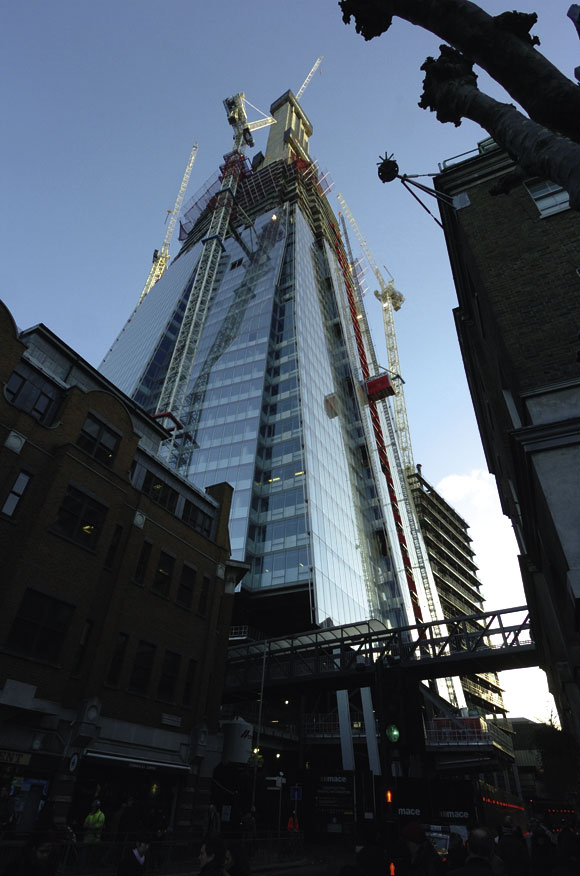 The Shard tapers inwards as it gets higher with column spacings decreasing from 6m centres to 1.5m

When it reaches its final height of 310m the Shard will not only be the European Union’s tallest building it will have become London’s most highly visible structure.Rising up on a plot adjacent to London Bridge Station, the building has quickly become a landmark and one finds it difficult to remember a time when it was not there. How fast the Shard has ingrained itself on the capital’s consciousness is testament to the size, shape and design as well as the speed of its construction programme.

This programme, which began in 2007, has seen a number of records tumble including the UK’s largest ever continuous concrete pour for the basement slab and most recently (December 2010) becoming the country’s tallest structure, ahead of schedule, when the 72-storey core was completed.

Said to be Europe’s largest mixed-use building, it has been designed by architect Renzo Piano as a ‘vertical city’. Sitting above three concrete formed basement levels, from ground level upwards the Shard consists of public areas, retail outlets and a lobby up to third floor, office accommodation up to level 28, and then above this restaurants and a mid-level public viewing gallery from levels 31 to 33. Levels 34 to 50 have been pre-let to the Shangri-La Hotel and within this zone the structure’s framing material changes from steel to concrete.

Ground floor to level 40 the building has been constructed with structural steelwork. However, from the first level of hotel bedrooms a concrete frame kicks off. The post tensioned concrete frame then extends upwards to level 69 and not only encompasses the hotel, but also 12 floors of prime residential apartments. Serviced by the five-star Shangri-La Hotel, the apartments will be the highest in the UK.

The lateral stability for the structure is based on a vertical spine consisting of a cantilevered concrete core stiffened by a steel outrigger hat truss at high level (floors 66-69) engaging the perimeter columns of the building.

Optimised perimeter column locations transfer with height – as the building tapers – from 6m spacing at the base, to 3m, and then 1.5m at the very top. All vertical column transfers were optimised and achieved with no loss of space, while the perimeter columns are transferred using either a load sharing steel girder system or A-frames.

The Shard’s central core has topped out at level 72, which is the top floor of an upper viewing gallery. This gallery, which extends from level 69 to 72, will be erected as part of Severfield-Reeve’s steelwork erection programme phase two. Due to begin later this April, the second steel frame element crowns the building with a triple storey frame for the upper viewing area, followed by a steel lattice frame for the spire which will extend the structure upwards to level 87.

Above this, further steelwork – forming a cantilevered frame for the glass cladding at the structure’s pinnacle – will be added, taking the building to the lofty heights of level 92. This topmost steel part of the structure has been dubbed the ‘Radiator’ as it will also house the heat rejection plant.

From the foot of the structure, ground floor to level 40 represents the biggest part of the overall steel package, and as of early December this initial phase, involving some 15,000 pieces of steelwork weighing 12,000t, had been completed by Severfield-Reeve Structures.

Springing off of the ground floor concrete slab, the lower level steelwork erection started during the Spring of 2010. This important milestone in the overall construction programme followed on from an extensive demolition phase and the installation of foundations and the slab.

“Completing the initial and the largest part of the steelwork by November was a huge achievement for all those involved,” says Gareth Lewis, Mace Chief Operating Officer for Construction. “One of the main reasons for choosing steel was for its speed of construction.”

Another important factor in favour of steelwork, for this first sector of the building, is its flexibility. The offices, once complete, can be configured to client’s needs by removing partition walls and enlarging adjoining spaces, something which would be extremely difficult and time-consuming with a concrete frame. Steel has also allowed the office zone, as well as the overall building height, to be maximised with an office floor to ceiling height of only 3.65m.

“Fabsec cellular beams, mostly with 15m spans, with services passing through them were deemed the most appropriate form of construction for the office, retail and the majority of the public spaces,” explains Mr Moazani. “Steel framing is also used in the lowest levels of the hotel from levels 37 to 40 where edge transfer beams are used to transfer loads from columns at 3m centres to office floor columns at 6m centres.”

Three locations at the perimeter on each office floor plate are designated as winter gardens. Here the steel frame is exposed and the steelwork is detailed appropriately as an architectural feature. The floors within the winter gardens are detailed with Luxcrete type glass lenses set into the precast slab units.

The building’s perimeter columns have been designed so that their weight, size and spacing reduce with height adding to the impression of increasingly delicate structure tapering into the sky.

The columns system, with its decreasing column spacing, requires the use of sets of load sharing beams at various locations in the elevation. Acting as a load sharing system, a Vierendeel truss system has been erected around the top of the steel framed sector (levels 37-40), transfering loads back to the core. This zone not only features a grid change, but it is also where the post tensioned frame kicks off.

The structural steelwork programme has also played an important role in the swiftness of the overall scheme. Many of the other trades follow-on immediately behind the steel erection, and the quicker the steel is up the quicker the cladding, for instance, can start.

To complete the first 40 stories of steelwork by November is testament to the close cooperation between the entire construction team, something which has been borne out by the logistical schedules.

“We have a dedicated team on site, working closely with all other team members,” says Peter Emerson, Chief Operating Officer of Severfield Rowen. “We’ve prefabricated as much steelwork as possible offsite which has contributed to a quick programme.

“Working offsite has included welding all perimeter cladding supports to the perimeter steelwork, which has helped with the speedier installation of the glazing.”

A coordinated approach has been vital, especially with the logistics of working on a tight site adjacent to one of London’s busiest rail stations.

“When it comes to the final steel elements which crown the building, we will be delivering as much of the steel in pre-assembled ‘intelligent’ units to speed up the erection and again limit the number of crane lifts,” sums up Mr Emerson.

The shell and core of the Shard is due to be completed in Summer 2012, ready to form a fitting backdrop to the London Olympics. 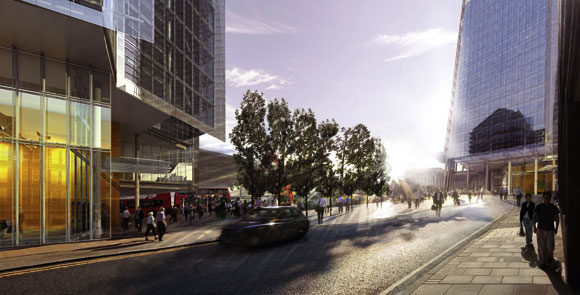 The Shard, which is being developed by Sellar Property Group in conjunction with the State of Qatar, is the first phase of one of London’s most important urban regeneration projects. Forming what has been dubbed London Bridge Quarter (LBQ), the overall development also has three other elements: London Bridge Place, an 18-storey commercial block; a new concourse for London Bridge Station; and a new bus station.The estimated value of the LBQ is about £2,000M, and it will make a major contribution to the continuing regeneration of this already vibrant part of London’s South Bank as well as helping to make Southwark a destination for both international businesses and tourists alike. It is estimated LBQ will provide employment for up to 12,500 people.