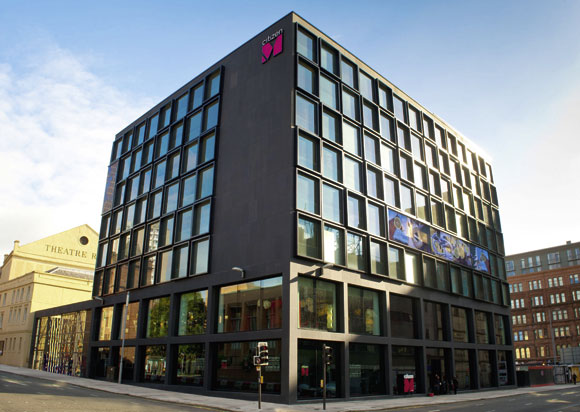 The UK’s first modularised citizenM hotel is open for business

A new 198-bedroom hotel in central Glasgow has been constructed in quick time by using offsite steel modular construction technology.

The prefabricated modularised bedrooms were all produced offsite at the Tata Steel Living Solutions factory in North Wales, before being transported to Glasgow to be fitted into place. This form of modular construction can deliver many benefits over traditional building methods, including lower project costs, earlier completion time and improved quality and sustainability performance.

After the installation of piled foundations, the initial construction process involved the erection of the podium and transfer structure for the lower portion of the building. This consisted of steelwork contractor Henry Smith erecting a two-storey steel frame containing composite metal decking.

The ground floor of the hotel has been designed for retail outlets, while the first floor level houses the hotel’s reception area, restaurant and bar.

A traditional beam and column steel frame was chosen for this part of the project for speed of construction. The entire frame was erected in approximately two weeks, giving the overall project a speedy start.

Approximately one dozen modules were craned into place every day

However one main challenge – which needed to be overcome – was encountered during the erection of the steel frame. This was connected with the site’s underground services. One of the main corner columns was due to be erected directly above an incorrectly located fibre optic cable, which had to be re-routed around the site.

To prevent delay to the construction programme, a temporary raking column was installed, which allowed the rest of the frame to be safely erected. Once the services had been moved, the temporary column was then removed and a permanent column was inserted in its place, a process which could not have been undertaken if the frame was concrete.

“The steel frame for the lowest two levels of the hotel structure was designed and erected to accommodate and accept the loads for the upper six levels of bedrooms,” explains Dave Grove, Gifford Technical Director. “It acts as a transfer structure.”

Once the frame was erected a steel grillage was placed over the top of the first floor and then a 125mm thick transfer slab was cast. The podium was then ready for the prefabricated bedroom modules to be lifted into place.

As well as acting as a transition zone between a steel frame erected onsite and the modular offsite construction, the slab on top of the first floor level is also where the project’s two cores change.

Erected along with the steel frame, the lower two floors have steel braced cores. However for the upper levels subcontractor Bourne Off-Site Solutions supplied prefabricated hot rolled modular steel cores which were brought to site fully complete. With the aid of a mobile crane they were landed on top of the podium directly above two openings in the transfer slab.

The initial part of the modular construction process saw the two stair and lift cores installed.

“Two floor levels of prefabricated core were installed at first,” says John Boylan, Tata Steel Living Solutions Project Manager. “In this way the cores were always one floor ahead in the process, which helped with the safe landing of the bedroom modules.” 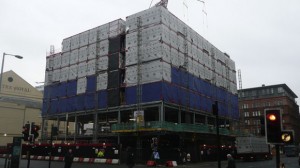 In each of the six upper levels of the hotel, two rows of bedroom modules were installed, along the inside and outside façades. The initial floor of units were tied into the transfer podium as well as the two cores. Each subsequent floor level of modules was then installed and tied into the modules below as well as the separating corridor cassettes.

These corridor cassettes were also brought to site as prefabricated units and installed to separate the two rows of bedrooms to form a corridor, 1.6m wide.

All of the 198 bedroom modules are approximately 2.5m wide × 6.5m long and 2.8m tall. Each one was fully fitted out in the factory and contained a shower enclosure, toilet, vanity unit and sink, fitted wardrobe and a large super-sized double bed. A service riser was also included in the module, which meant after the installation process was completed, each module was easily and quickly linked into the main mechanical and electrical services in the corridors.

“Between ten and twelve modules were installed each day using a 300t capacity mobile crane,” explains Mr Boylan. Once installation was completed and the modules were all in place the façade of the structure was then clad and this very nearly completed project.

Robin Herron, Pre-Construction Director, John Sisk & Son said: “citizenM is an innovator in the hotel industry and has come to the market with a refreshing product responding to the needs of its target market, delivering affordable luxury. For this project the benefits of optimised modular construction were clear from the initial design stage down to the final delivery, bringing the lowest project cost, earlier completion, improved quality and building performance.”