Fast track construction, environmental friendliness and in-built flexibility were the must-have’s on the shopping list for the giant Silverburn retail development in Glasgow. Martin Cooper checks out how steel delivered.

The down at heels Glasgow suburb of Pollok is set to become one of Scotland’s leading shopping destinations. At the end of next year, the area’s £350M Silverburn retail development, boasting more than 90 shops and 14 restaurants, is scheduled to open its doors.

Offering 1 million sq ft of retail space, Silverburn is said to be the largest shopping complex in Scotland that isn’t located in a city centre. Situated adjacent to the M77 Junction 2, a new dedicated slipway is under construction. This, the developer says, will allow the more than 2.5 million people who live within one hours drive of Silverburn easy access to the site.

Alistair Kell, Project Director at BDP envisages the project will also act as a catalyst for the redevelopment of Greater Pollok. “Silverburn will be a primary retail destination within the central belt of Scotland and has been conceived to encompass the local community and instill a greater sense of civic pride to the area, making Pollok great once more,” he adds.

As well as being one segment of a much larger scheme – a giant 13,500 sq ft Tesco is nearing completion and various other schemes are in the pipeline – the Silverburn shopping centre has thrown up a number of interesting design challenges.

Gerry Stuart, Director of structural engineers Stuart McTaggart says one of the main reasons for choosing a steel-framed structure was the speed of construction that it allowed. “The developer had already signed a contract with Debenhams, before the majority of the design team came on board, for its store to be ready for fit-out by autumn 2006. This meant we’ve always had a very tight programme to meet.”

As the Debenhams store is one of the two main anchors for the initial Phase 1 of the project, it has been one of Silverburn’s principle drivers.

To speed up the entire construction process, Mr Stuart says that all steelwork had to be fast-tracked and six months before the main contractor was even appointed all steel elements had already been designed. All of this preparatory work was done in conjunction with steelwork contractor Severfield-Reeve Structures.

“This created a very challenging structural design process during which we had to be very flexible and quick to react to client changes and design development while still meeting the original deadline,” Mr Stuart says. 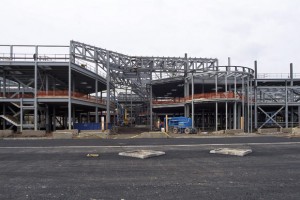 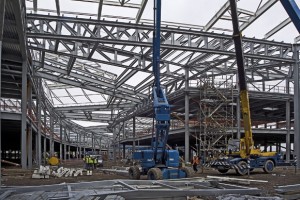 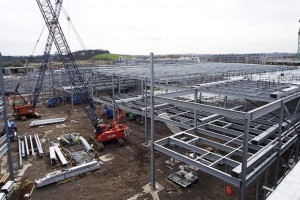 Steel erection is ahead of schedule thanks to fast-track construction 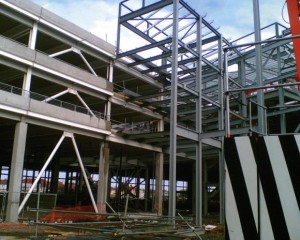 Steel supports the delivery yard beneath the multi-storey car park

“By the time we were appointed as main contractor all steelwork was designed and was already being fabricated. This has quickened the construction process to meet our tight completion date,” Mr Gourley adds.

As well as offering a quick time solution for construction, Mr Gourley says steel also offers more flexibility than alternatives. “By using steel the smaller retail units can be enlarged and combined with adjacent units in the future. If there were concrete walls this reconfiguration wouldn’t be possible.”

The construction of the Silverburn shopping centre has been divided into two phases. Phase 1 kicked off last year, with steel erection beginning in January. This section approximately accounts for two-thirds of the scheme and includes the two main anchor stores of Debenhams and Marks & Spencer. Roy Barrow, Project Manager of Severfield-Reeve says 7,300t of steel will ultimately be used on Phase 1.

Debenhams’ need for an early completion date meant the steel erection programme began on this anchor section. Offering an overall floor space of 11,520m², Debenhams differs from the rest of the project as it has three levels, two retail floors and a third storey for management offices and a rooftop restaurant.

The rest of the project is a two-storey braced steel frame split into independent areas over a 600m building length. A composite metal deck and concrete floor slab has been used throughout  as this allows for maximum flexibility to form openings

A large number of column section sizes are also being used. Mr Barrow says the majority of the columns for the retail units are 13.5m long, although longer sections up to 16m in length are being used for the raised roof which covers the shopping centre’s mall.

The second area of steel erection to begin was the Marks & Spencer anchor store. It will offer 5,575m² of retail space over two-levels with a grid plan of 10.8m x 10.8m.

Meanwhile, running through the middle of entire 600m-long project is a glass-roofed mall. This has a number of interesting steel elements including a series of 6m-high ‘roof pods’ installed to enable natural ventilation of the Silverburn centre.

Mr Stuart says: “The pods will provide environmentally friendly and cost efficient air conditioning and they are supported off a series of Stuart McTaggart designed long span shallow depth steel trusses and Fabsec beams spanning over the mall.”

Between the pods, a series of smaller ‘roof kites’ will provide natural daylight and these are supported off a steel frame formed by 700mm deep Fabsec beams. All supporting steelwork for the mall’s roof is being supplied by Severfield, while a sub-contract was awarded to Portal, for all roof pod and kite architectural steelwork.

Phase I also incorporates two of the project’s main entrances, situated in front of the two anchor department stores. Severfield is supplying a number of large trusses to support the glass roof over two entrance plazas.

According to Mr Barrow, both entrance plazas are formed with 3m deep steel trusses, typically spanning 35m, along with Fabsec beams, and these support a series of steel pods and lights set into the glass clad roof.

“Generally the trusses are fully assembled in our workshop and delivered to site in one piece,” Mr Barrow says.

One of the final pieces in the construction process will be a feature ‘floating roof’ running the entire length of the east (front) elevation overlooking a landscaped walkway and a large car parking area.

“Steel raking columns, situated between every second main column span out, away from the main structure,” Mr Stuart says. “These then form a V-shaped formation with 7.5m clearance at their widest point.”

Situated to the rear of the Silverburn centre is a six-level multi-storey car park. Main contractor for this separate contract was Dunne Building and Civil Engineering, and it used a concrete frame for the majority of the structure. However, one end of the car park sits on top of a service yard and because a column-free area was required, so delivery trucks could have unobstructed access, seven 30m-long steel transfer girders support the roof.

Severfield delivered the transfer girders to site in 15m-long sections, and says it supplied a further 620t of steelwork for this contract.

Meanwhile, phase 2 of the main project is currently just getting under way. This phase will extend the shopping mall and retail units by a further 150m and will also include a large glass-covered winter gardens.

Mr Barrow says this phase will be constructed in an identical manner as Phase 1 with similar column and beam sizes and grid plan. “We’ll supply a further 3,500t of steelwork for Phase 2,” he sums up.

Both phases are scheduled for completion by autumn 2007.