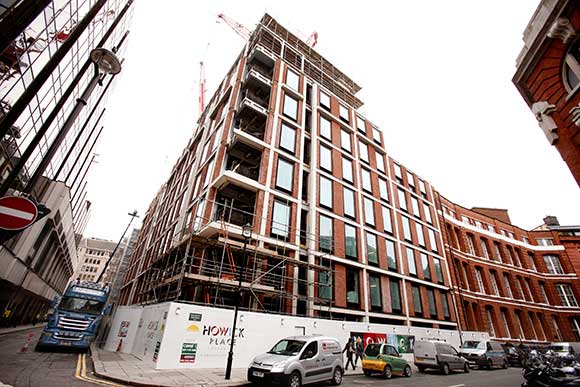 Today, companies want offices that are large, open plan and flexible, and the best way of creating such spaces is with structural steelwork. One Howick Place in London is a project which is not only relying on steel for office space but also for two levels of apartments.

Structural steelwork dominates the UK’s multi-storey market with around 70% of these buildings usually constructed with a steel frame. The tall eye-catching towers located in the City of London and Canary Wharf bear testament to this fact, as the majority of these structures were built with structural steelwork as their main component.

The office sector has been affected by the economic downturn, but a number of high profile steel framed commercial buildings are in the offing. As well as commercial structures, multi-storey mixed use schemes also lend themselves to a steel frame, especially if large open-plan column free spaces are a prerequisite. 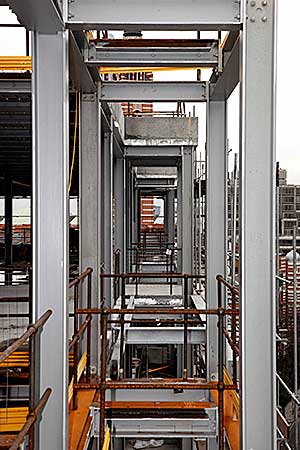 This was the case for One Howick Place in Westminster, a new 21,000m² commercial and residential block under construction in the city’s Cathedral Conservation area. The £45M scheme is a redevelopment of the plot formerly occupied by the old House of Fraser headquarters. It includes nine levels plus basement and the structure will accommodate two areas of retail space, high quality Grade A offices over eight of the floors, with the two uppermost levels housing 33 apartments.

The scheme also includes a number of energy saving environmental features such as a combined heat and power (CHP) plant and photovoltaic cells on the roof, which will maximise energy efficiency and minimise the building’s CO2 emissions. These measures will help One Howick Place achieve its target of a BREEAM ‘Excellent’ rating.

Covering approximately 80% of the scheme’s footprint, this mixed use part of the project has a structural steel frame with concrete floors, gaining its stability from two main internal staircase cores. The remaining 20% of the project is a largely independent concrete framed structure used for affordable housing.

“Steelwork was chosen for its economy and for the ease with which we could form the 16m-long clear spans for the offices,” says Paul Hosford, Price & Myers Project Engineer.

In order to maximise the floor to ceiling heights the project has used cellular beams for the majority of the floor plates. These sections have openings which accommodate the M&E services and consequently keep the structural voids between floors to a minimum. 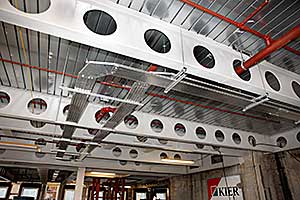 Long Column-free spaces were essential for the office floors

Approximately 666t of Fabsec cellular beams have been used on One Howick Place, with the majority of them weighing 2.5t each. However, further up the structure the beams get deeper and heavier as there are some 18.5t members supporting the increased loads of seventh and eighth floors.

“The column grid pattern changes for the residential part of the building. It isn’t so open plan, so these heavier beams are supporting columns that start on the seventh floor and form apartment walls,” explains Clem Bollon, Rowen Structures Site Manager.

The decision to construct the upper two residential levels of the project with steel was one of practicality as well as for ease and convenience of programme. Project Architect Martin York of Rolfe Judd says it was simpler to continue with a steel frame for the top floors, while steelwork’s speed of construction was also an important consideration.

The majority of the concrete slabs up to seventh floor level are 130mm deep and formed with profiled metal decking, which acts compositely with the steel frame. This changes for the uppermost two levels of the building, which are set back from the facade to create a high level roof garden. Here, in order to minimise the structural depth, the beams are set with their top flanges within the concrete slab, so the metal decking is supported on shelf angles and consequently the slab is non composite. 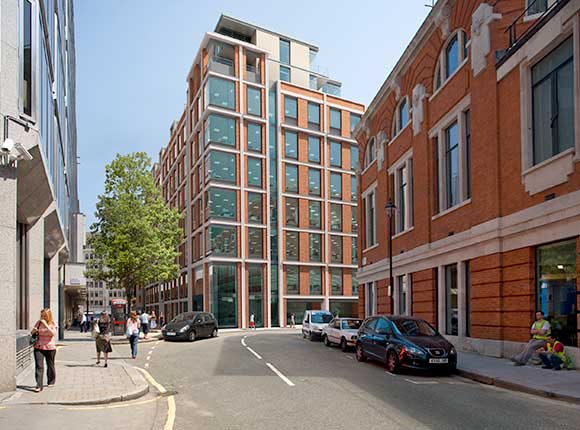 Impression of the completed scheme

The use of steelwork paid dividends when it came to designing and then constructing the main deliveries entrance for the building. A large column free area was required and a four-storey vierendeel truss was erected to create the 21m clear span over the service yard. For ease of erection the truss was supplied in prefabricated sections, with three main components at each floor level consisting of a floor beam and two column sections. This made the erection process quicker due to less assembly and bolting up being done on site.

Temporary works were installed at ground floor to assist with the erection of the first two levels of the truss. In order to keep it stabilised, the temporary works remained in place until the fifth floor of the steelwork had been erected and the first and second floor slabs had been concreted.

“A vierendeel truss was the only option as vertical cross bracing was ruled out owing to the extensive glazing in the facade,” adds Mr Hosford. “This part of the frame worked especially well in steelwork.”

One Howick Place is due to be completed by the autumn.