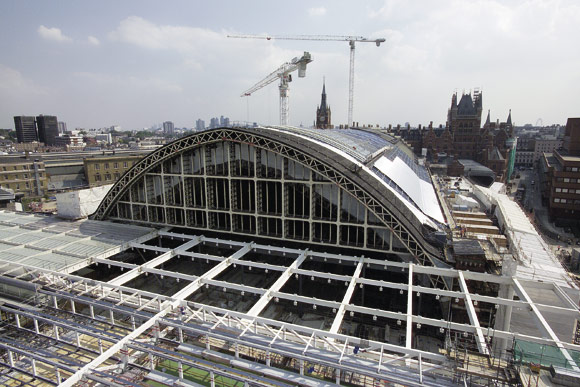 Extending St Pancras station to handle Eurostar trains called for an extension in harmony with the existing structure. A slender steel canopy is the result, discovers Jon Masters.

Impressive views of William Henry Barlow’s great arched station canopy have greeted passengers arriving at St Pancras station for nearly 140 years. From 2007, though, the vista will be transformed. Passengers leaving trains at the far end of the platforms will see it to best advantage as they walk beneath a new 200m long steel canopy, which will then give way to a spectacular new view of the restored 1865 Barlow Shed.

How the new fits with the old is a major factor in the £400M Contract 105 of Section Two of the Channel Tunnel Rail Link. St Pancras Station is being restored and extended northwards to accommodate Eurostar trains, and a key design consideration for the new roof structure was that it had to be in harmony with Barlow’s wrought iron arch.

“The design concept recognises the huge Barlow Shed, which is still reckoned to be the world’s tallest single arch in a building,” says Rail Link Engineering’s technical director Mike Glover. “St Pancras is Grade I listed and so anything that is built on to it needs a sophisticated layering of environmental heritage approval. The roof extension came from a process of close consultation with English Heritage.”

Contract 105 is a project of nine years’ duration so far for Glover, who heads the team that has developed the design concepts for the entire CTRL. This amounts to civil, structural and railway engineering worth around £6bn, including the transformation of St Pancras into an international and domestic transport hub. 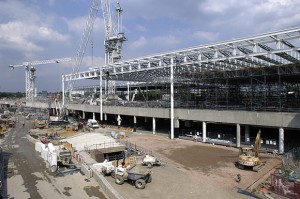 Eurostar trains needing platforms about twice the length of Barlow’s originals have to be catered for as well as domestic Midland Mainline, Kent commuter and Thameslink services. The result will be 13 platforms at the existing level with a new Thameslink station beneath. The middle six platforms for Eurostar trains will run the full 400m of the extended station to terminate in the Barlow Shed, while the remaining seven domestic platforms will terminate in the new structure.

“The options were either to extend the station roof matching the geometry of the Barlow arch, or to go for something that does not challenge the old structure. The extension needed to be considerably wider than the existing station, so the first option was out and we ended up with a flat roof subservient to the Barlow Shed,” says Glover.

The new roof also had to be as thin as practical, with some geometric interest and a shape with a sense of flow and light, Glover says. The result is a structure with three spans across the tracks and seven 30m bays longitudinally. Four lines of 2.6m deep Warren trusses run longitudinally, supported by circular steel columns. Vierendeel girders span transversely between the same supports, with a saw-tooth roof profile curving from the top of each girder to the bottom of the next.

This main roof structure stops 22m short of the gable end of the Barlow Shed. For the space between, Glover’s team has designed a shallower transition roof structure to “telegraph” views between the old and new structures.

“The new roof meets the Barlow Shed where platforms for Midland Mainline and Kent commuter services will terminate and where passengers will come up from the new Thameslink station beneath. It will be a very busy and important concourse area,” says Glover.

The transition roof will be a grillage of 1.1m deep plate girders supporting pyramids of glass and designed to create an atrium effect. It will hang from eight groups of four 30mm Macalloy bars which will drop from needle beams to be connected to the Barlow arch.

Erection of the main extension roof by Watson Steel Structures is progressing well (see box). Connection to the Barlow Shed, however, is a section that remains to be tackled.

“The Barlow Shed was built with indicative drawings, so little information exists in relation to the gable end of the arch,” says WSS contracts director Alex Harper. “The gable has to be surveyed before we can model the structure and fabricate the end steelwork to connect with it.”

When alterations to the old structure are nearer completion, WSS will be given access to the  full height scaffold for the structural survey. The final steelwork will then be erected to produce what should be an awesome mix of modern and Victorian engineering. 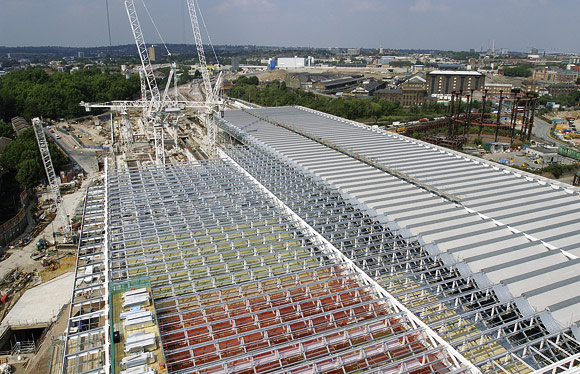 A third of the roof was built in Phase I to accept diverted Midland Mainline trains while the Barlow shed was restored (Photo: Urban Exposure/CTRL)

Watson Steel Structures (WSS) is progressing the second and larger phase of the St Pancras extension steelwork, which amounts to around 3000t in total, from its Bolton yard. The first phase — the easterly half of the steel canopy structure — was completed to allow four new platforms to be opened for Midland Mainline services in April 2004.

This enabled Contract 105 principal contractor CORBER, a joint venture of Costain, O’Rourke, Bachy and Emcor (formerly Drake & Scull), to close St Pancras as it had been known for almost 140 years and begin a massive restoration programme in and around the Barlow Shed. Phase two of the extension — the remaining nine platforms and their roof structure — could then start.

“We have been on site for around two and a half years now. It’s a huge slender canopy we are building with few supports,” says WSS contracts director Alex Harper.

“We designed and built temporary steelwork to support the splice side of the first phase of the roof. Now we are back on site for phase two, the cross-trusses have been continued and the temporary works removed during night-time closures of the operational railway part of the extension.”

“Highly architectural” is how Harper describes the entrance and side screen steelwork. Where possible, welded or hidden bolted connections have been used.

The main roof trusses are very slender being only 2.6m deep but up to 36m long. Prior to starting on site, lifting trials were carried out at Bolton to prove lift beams specially designed by WSS. Delivery to site is after 7pm to keep disruption to a minimum.

“It’s a very challenging job,” says Harper. “Logistics are complex and we have to coordinate closely with CORBER’s concreting team, which we are currently chasing northwards down the job.”

All change at Barlow shed 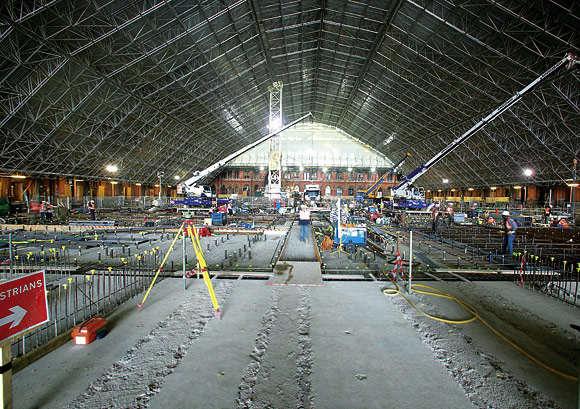 Restoration of WH Barlow’s St Pancras train shed entails cleaning and repairing the arch’s wrought ironwork above a massive arched scaffold and platform. But conversion of the old station is also necessary.

The roof is being restored to its pre-World War II condition with ridge and furrow glazing over the crown and Welsh slate over the remainder, but the platform structure is being substantially altered.

The Victorian platforms and track were supported by 800 wrought-iron columns and a grillage of wrought-iron beams. Euro-star trains will enter at the same level, but on a new heavily reinforced concrete trackbed. Below, what was originally an undercroft for beer storage and more recently a network of small businesses, will become the arrivals hall with ticket and passport control.

Numerous escalator and light wells are being cut out of the wrought-iron structure to connect the two levels and whereas the grillage of beams will become redundant, most of the columns will remain to support the new trackbed.