Putting a step into education 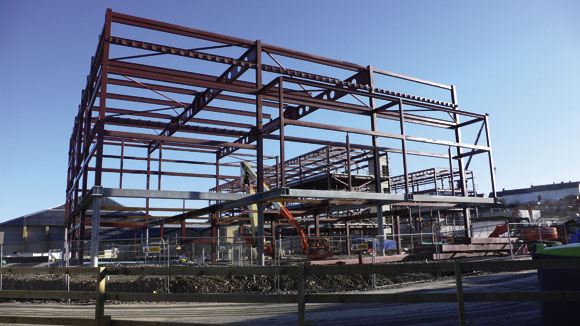 Locality and making the best use of existing topography influenced the design of a new BSF college in Bideford. Martin Cooper reports from the north coast of Devon.

The Building Schools for the Future (BSF) programme is continuing apace with a new technology college in the north Devon town of Bideford being built by Morgan Ashurst. The college, for 11 to 18 year olds, will replace the present school which currently occupies an adjacent site and when complete it will accommodate 1,800 students and staff.

As a BSF pathfinder project, the design team believes the job offers the opportunity

to create “an institution of learning that cultivates the knowledge, skills and values that will enable children and young people to contribute to a future where the environment is restored and sustained.”

To achieve these worthy aims a number of sustainable features have been incorporated into the design of Bideford College which is on target to achieve a BREEAM ‘Excellent’ rating. Emission reductions will be achieved by using a biomass boiler plant as well as micro wind turbines on site. Approximately 70% of the school roof will be covered in a green sedum covering which will attract wildlife and limit rainwater run-off. 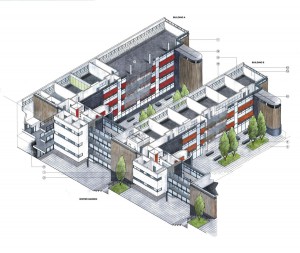 The central ‘spine’ building with blocks A and B

The topography of the site however, has played an important role in the final design of the college. The college is being built on former playing fields which slope, giving the site an approximate 20m disparity between the northern and southern perimeters.

“The nature of the site and the difficulties associated with excavating the underlying rock strongly influenced the design of the college on three terraced levels, which made the best possible use of the existing topography,” explains Michael Baughan, Parsons Brinckerhoff Project Engineer.

The college building comprises a 105m long central ‘spine’ which incorporates a central thoroughfare and winter garden along with a separate sports hall, gymnasium, main hall, kitchens and dining hall, and a drama studio all orientated along the slope of the site. Terraced steps formed by two reinforced concrete retaining walls achieve the changes in level.

The terraced steps mean the blocks at the front have three levels, with blocks on the middle step having two storeys and the upper tier of school building’s generally one-storey high. This then creates a school with a level roof line.

Seven wings, each between 50m and 65m long and 8m wide, provide the teaching accommodation and join the central ‘spine’ (also known as Block H) at right angles and are consequently perpendicular to the site’s slope.

The school’s narrow plan design allows natural ventilation, while classrooms are located to the north side to allow maximum use of daylight and at the same time avoiding the problems of glare and summertime overheating.

The need to use sustainable materials, Bideford’s locality as well as the site’s slope, all influenced the decision to construct the college with a steel frame. A number of materials were initially looked at, in-situ concrete was discounted because of supply chain issues, while a glulam/steel option was discarded because the timber beams would have been too deep, while not easily accommodating services.

To accommodate all of the services, while keeping the floor to ceiling heights to a minimum cellular beams with 200mm diameter holes have been used throughout the project. 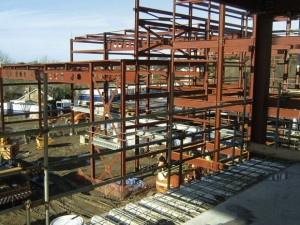 Two steps have been incorporated into the school’s design 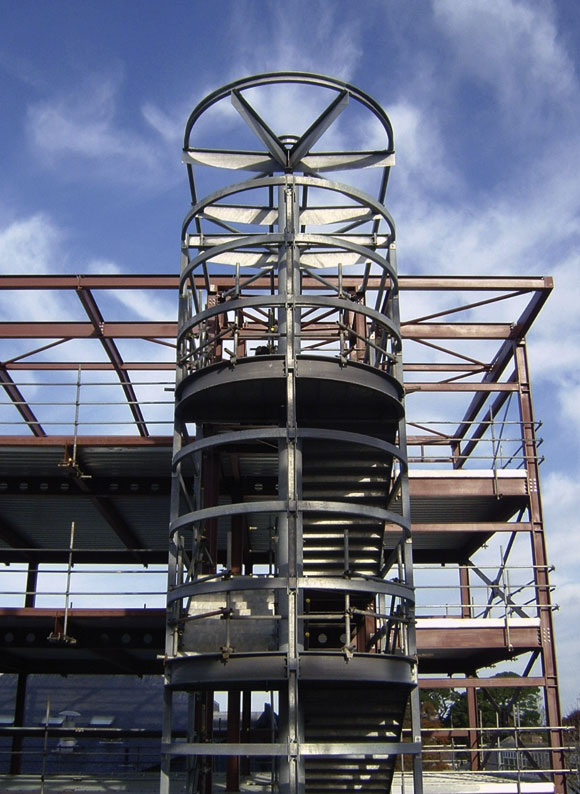 Circular staircase towers are an external feature of all blocks

The winter garden has been described as the “heart of the school” as it is the primary circulation route through the college. “With this long spine building connecting to all other blocks it will be easy for students to find their way around, especially those new to the school,” says Mr Western.

The eastern end of block H contains a sports hall featuring 29m spans formed with spliced cellular beams. The initial design envisaged one cellular beam spanning the sports hall, but logistically such a long steel member would have been difficult to transport to site along north Devon’s winding roads.

A compromise was reached and steelwork contractor William Haley Engineering has erected the 29m roof span with three individual sections spliced together on site and then lifted into position as one long member.

“We had to use both of our on site mobile cranes to place these cellular beams with a tandem lift,” explains William Haley Engineering Project Manager Richard Duddridge. “These beams represented the biggest lifts on the entire project.”

The sports hall is a double height zone with changing rooms situated beneath at ground floor level. The remaining two thirds of block H is given over to the winter garden which also features large spans and will accommodate a dining hall and a general meeting area.

The sports hall floor features a suspended slab supporting under floor heating and a timber sprung floor with changing rooms facilities and stores beneath. To maintain acceptable floor to ceiling heights  in the changing rooms a shallow construction depth was required. “This together with a desire for minimal formwork, a flat soffit, minimum dead weight, a high load capacity and a stiff construction led to an asymmetric beam, precast concrete floor and a structural topping design,” says Mr Baughan.

Stability for the ‘spine’ is provided by a combination of braced bays and moment frames which was dictated by the fenestration of the block’s elevations and the nature of the large uninterrupted open spaces needed in the winter garden and sports hall.

The layout of the important circulation areas between the wings and the ‘spine’ meant that the simple approach of using double columns could not be used and so sliding movement joints incorporating proprietary resilient bearings was incorporated.

Half of block H and all of the three storey blocks A and B were the first areas to be erected by William Haley’s steel erectors. As the project features no large cores, all structural stability comes from bracing and the composite flooring. To allow the slabs to be poured in the sports hall, only half of block H was initially erected. This was then temporarily propped, while the concreting was done.

“There are a lot of individual steel members on this project – approaching 1,500t in total,” adds Mr Duddridge. “But most of the steelwork is based around a 7.5m x 8.5m grid, so the majority of steelwork is fairly repetitive and on the small side.”

Getting steel to site has not been a logistical problem for William Haley. The roads from its Somerset yard to Bideford are good, although the last few miles are a little winding and narrow as the approach takes in a small residential area.

The project is on schedule and when it opens for the autumn term of 2011, Bideford will have a school built for the future.