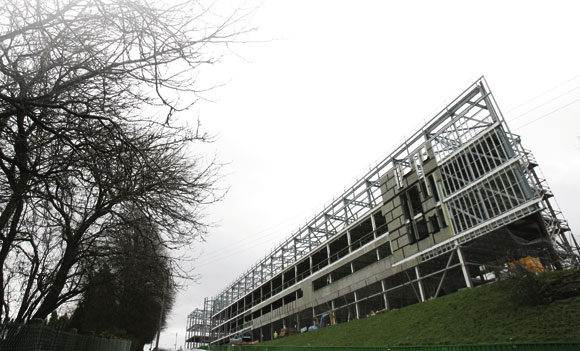 Phase one of a complete redevelopment of Anniesland College in Glasgow has begun with the construction of a new steel-framed teaching block.

Situated three miles from Glasgow city centre, Anniesland College has a reputation as a community friendly institution and has in recent times been awarded the Charter Mark for its customer care as well as an Investors in People award.

Established in 1964, the college has two campuses with some 8,000 students, studying further education courses in subjects as diverse as languages, computing, design and construction, engineering and community studies.

One of the campuses, Hatfield, is currently under going a complete re-build which involves demolishing the existing buildings and replacing them with brand new structures.

In order to keep the college functioning as normal, there is a three-phased construction programme with completion set for 2010. Phase one is under way and this involves constructing a new teaching block. Once students have de-camped into the new building, phase two will kick-off with the demolition of the old buildings which will then be replaced with a new workshop block. Finally, phase three consists of constructing a new campus car park and demolishing the old workshop block. 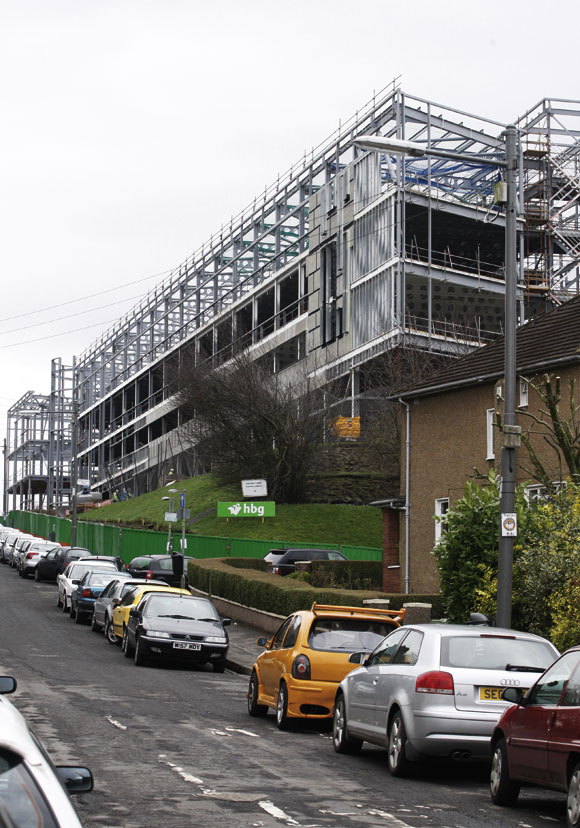 Phase one is scheduled for completion by the end of the year, although the college will start its own fit-out of the teaching block in October.

“Speed of construction is an essential part of this job,” says Wilson McCracken, HBG Project Manager. “The last two months of this phase will require us to work around the client’s fit-out team, so it’s vital we are on schedule and just finishing off some external works by then.”

As well as the quickness of the programme, the construction team are also challenged by the fact that they are working within a functioning college campus, which is also located in a busy residential area of Glasgow.

The teaching block is being built on land previously occupied by a car park and it is positioned directly in front of the existing college buildings. “Working around students and staff means noise and pollution are even more important factors than normal,” says Mr McCracken.

These considerations will be even more important next year once students have moved into the new teaching block. “Work will then begin on demolishing the old buildings, once we start putting up the second block we have to make sure access out of the college isn’t obstructed.”

The college’s community friendly reputation has been at the forefront of HBG’s campaign to keep local residents informed about the works, while the company has also improved the accessibility of the surrounding roads.

The streets around the site are usually full of parked cars so HBG has negotiated with the local authority and put double yellow lines down the minor road leading directly to the site’s entrance.

“I think the local residents are pleased with this development as it means there are now no parked cars obstructing their driveways,” adds Mr McCracken. “And all deliveries can now be made easily without the possibility of scratching vehicles.”

As well as keeping residents, college staff and students on side, there is also a building programme to complete. Steelwork and decking for the new teaching block’s superstructure are now complete and external works, such as cladding have begun.

The building will be clad with a number of various materials including stone and render, but zinc will predominate the main elevation. The roof is slightly pitched and will be clad with Corus Kalzip steel panels.

Steelwork contractor Atlas Ward Structures has erected 700t of structural steel for the new 140m long four-storey teaching block. Included in this total are 140t of Fabsec cellular beams which have been used for all of the structure’s floors.

The building’s layout is fairly regimented with all bays approximately 6m wide, while internally there are two spans, one 11.5m and the other 4.5m. These grid lines stay constant all the way up through the structure.

Cellular beams were specified because of the length of spans as well as the need to keep all services within the ceiling void. 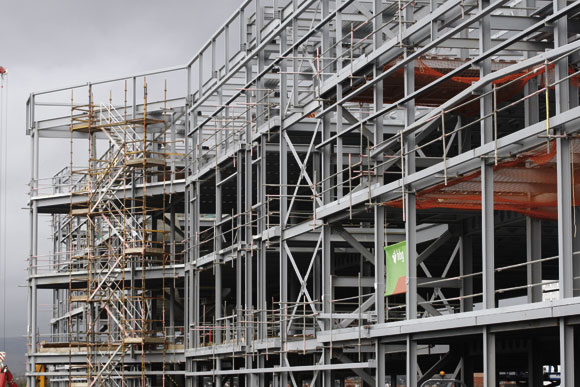 Fabsec cellular beams have been used for all floors

“Cellular beams offer the best strength to weight ratio and as the building is a college teaching block with lots of computer ports, we wanted a bespoke beam to accommodate the large amount of services,” explains Steven Ferguson, Faber Maunsell Project Engineer.

“By limiting the structural depth on these 11.5m long primary beams to less than 800mm meant we could negate the need for smoke detectors in the ceiling voids hence reducing access requirements, simplifying the ceiling solution and saving money.”

The building is rectangular in shape with a 9m cantilever at the western end. “This makes the structure a little more challenging,” adds Mr Ferguson. “Although this feature is purely architecturally, rather than structurally, driven.”

Stability for the structure is derived from four steel braced cores which are all positioned along the south elevation. The north elevation, which faces the street and contains a new drum-shaped entrance hall, has no steel bracing as it will be predominantly glazed.

To remove the need for bracing in the north facade Mr Ferguson explained that Faber Maunsell carried out extensive 3D analysis of the structure, taking into account the structure’s diaphragm action, to prove that the combination of composite slabs on a steel frame provided sufficient lateral stability.

Faber Maunsell also produced a Building Information Model (BIM) of the project early in design and development stage. This interactive 3D model allowed the construction team to view the entire structure, including all steelwork connections, in a virtual environment well before any work was due to start.

“The model greatly reduces draughting, fabrication and on-site errors and has contributed to the steelwork going up so quickly,” explains Mr Ferguson.

Once the college’s students have moved into the new teaching block, work will immediately begin on demolishing the existing teaching block to make way for the second phase of construction.

The second building will be a two-storey structure connected to the new teaching block at two points, and so forming a large internal courtyard.

Atlas Ward will be fabricating, supplying and erecting a further 500t of structural steelwork for the second phase of the project. The company is scheduled to begin this phase of its steel package in May 2009.