Playing by the Merton rule 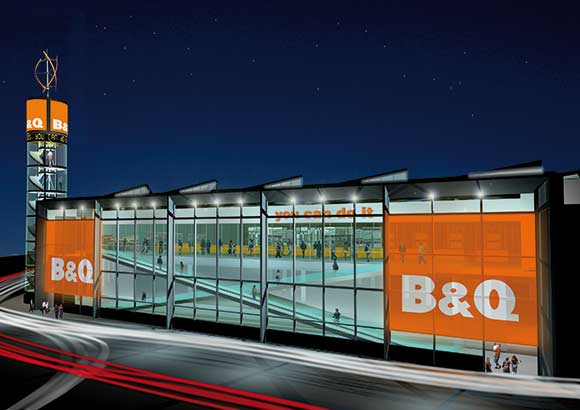 A new superstore in south west London has been designed to comply with local legislation that requires new non-residential buildings to generate a percentage of their own energy needs.

The new B&Q superstore in New Malden could well act as a blueprint for future construction of large distribution centres and stores throughout the UK. The steel-framed three-level structure has a number of built-in sustainability features and these elements have not only dictated the building’s design, but also keep it in line with a piece of legislation that originated in its local Borough.

In October 2003 the London Borough of Merton became the first authority in the UK to include a policy in its Unitary Development Plan that requires new non-residential developments, above a 1,000m2 threshold, to generate at least 10% of their energy needs from renewable energy equipment, such as solar panels and wind turbines. 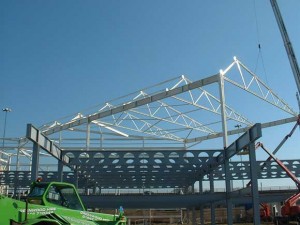 Merton is now revising the policy so that residential developments will also have to cut their CO2 emissions by at least 10%, while other local authorities, including the Greater London Authority have also adopted similar policies.

Black Architecture has been involved with this project for nearly five years and company Director Steve Burr, says environmental issues played an important part in the design process from the initial stages.

“The superstore is in Merton and as it has a footprint of approximately 10,000m2 it is above the threshold and so the 10% renewable energy Rule applies,” explains Mr Burr.

Of all the sustainability features the project’s wind turbine will be the most visible as it will be placed on a 30m-high steel tower located on a perimeter facade. “As well as being an important feature the tower and turbine will act as a signpost for the store,” adds Mr Burr.

Other environmental features include rainwater harvesting and an external geothermal closed-loop system, whereby the store will be heated and cooled by water passing through heat exchangers and a pipework loop that circulates 100m beneath the site.

During the winter hot water will be circulated via this subterranean pipe network into the building through pipes in the store’s floor. In summer, this process will be reversed and the water via the exchangers will be cooled allowing cold air to circulate around the store.

“This system gives a constant temperature throughout the store, in all seasons and is far more efficient than using heaters,” says Mr Burr. “The customer experience is enhanced and there will be no cold or hot spots within the store, which is typical when in-store heaters are used.”

Hemmed in by busy roads – including the A3 along one elevation – and an existing superstore on another side, the B&Q store’s irregular shape is dictated by the available space. Overall the structure consists of a large sales area sitting on top of a two level car park. Along one street facade the building also has a three-level row of offices, which unlike the rest of the project, is topped with a sedam roof.

Placing a large sales area above a car park was the most challenging aspect of the project as far as the design team are concerned. “Because of the heavy loadings associated with a superstore such as B&Q, with all the large stacked pallets, forklift movements and general weight of the shoppers themselves, we essentially provided a suspended floor that had all the characteristics of a ground floor slab,” says Barrett Steel Buildings Technical Director Richard Beesley.

“We had numerous design meetings to ensure coordination between the steel and the various sub-trades,” says Mr Beesley. “This included working very closely with Tarmac Precast to ensure all aspects of the B&Q specification were met.”

The slab above the two-level car park which supports the store’s sales area is consequently a ‘highly engineered slab.’ The extremely heavy loadings generated above meant the steel frame had to act compositely in order to work. 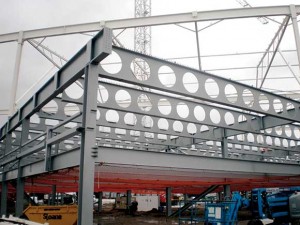 “To meet the very tight deflection requirements we used 1,373mm deep Westok cellform beams to support this slab,” explains Mr Beesley. “There are some big spans of up to 16m-long. The columns in the sales area follow a similar grid pattern as the car park, and these beams offered the best solution.”

Mr Burr agrees and adds: “This floor is highly engineered and cellform beams were used because of the tight tolerances and big loadings from above. Normally services will dictate the use of these members, but in this case it was decided that they offered minimal deflection and the best solution.”

Another interesting and environmental feature is the structure’s north facing roof which will allow natural daylight to penetrate the store and give customers an outside view. “Plenty of natural daylight is integral in enhancing further the customers shopping experience and letting them see what’s happening outside,” explains Mr Burr.

To get the store’s roof aligned in a north-south position also meant some complex steelwork engineering was required on some of the supporting columns. Because of the site’s confined position and to get the maximum spaces in the available space, the almost rectangular-shaped car park is positioned in an east-west position.

So the second floor trading area is in fact twisted by 45 degrees to the levels below. Columns at this level are repositioned and slightly skewed to give the upper level its north facing roof.

The car park is based on a 7.8m x 15.6m grid pattern which is slightly more generous than the average store car park. The upper trading level has a larger grid and only every third column is twisted and extends into it.

The north facing roof is formed by four rows of tapered steel trusses, which span up to 22m over the two central aisles and seven metres on two outer spans. At their deepest, facing north, the trusses are 2.3m high and will be glazed to allow the daylight to penetrate.

Barrett Steel Buildings will complete its steelwork erection this June and is scheduled to finish its work by July, with the store opening for business in December.