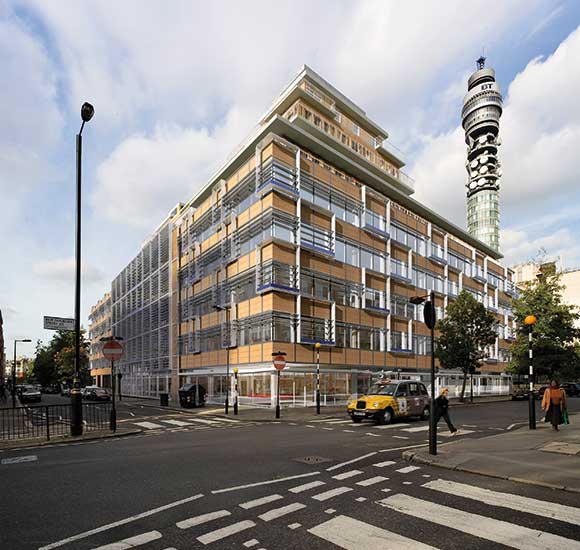 Artist impression of the completed and renovated Collingwood House

A worn out 1960’s concrete structure in central London is being given a new lease of life with steel framed extensions, with the majority of the construction work taking place directly beneath 47 occupied apartments.

Refurbishing and extending an old building in central London may not be an unusual undertaking;  the procedure seems to be taking place regularly in most areas of the capital as demolition isn’t always a viable option.

There can be many reasons for choosing to refurbish rather than demolish and rebuild a building, with criteria such as a protected and listed historic facade, disruption to adjacent or conjoined structures, and sometimes even the cost of the operation coming into play.

However, none of these apply to Collingwood House, a 1960s office and residential building situated just north of London’s major shopping thoroughfare of Oxford Street.

The structure sits on its own island site, surrounded by four busy London streets, so adjoining buildings are not an issue. There are no restrictions due to it being listed, as Collingwood House is an unremarkable looking reinforced concrete edifice.

What makes this site unusual is the fact that all building work is being carried out beneath 47 occupied apartments. Moving out all of the tenants would have made the construction work easier, but this was not an option as they all possess leaseholds. Project developer CORE initially bought two of the apartments, but that still left plenty of residents for the contracting team to work around.

“It’s certainly a unique aspect having occupants living above the work, but we’ve tried to make life for them as bearable as possible,” explains Andy Doughty, Project Director for design and build contractor Faithdean.

Faithdean publishes a monthly residents newsletter, outlining where the project works are currently at and what is imminent during the next month, while quarterly meetings, held in a local hostelry, also help to keep Collingwood’s occupants on-side.

Overall the work includes increasing the building’s office space to approximately 8,300m². This is being done by extending three portions of the structure up to the fourth floor from first floor level. All of these elevations will then fill-in the original H-shape of the structure and create a true city centre block. 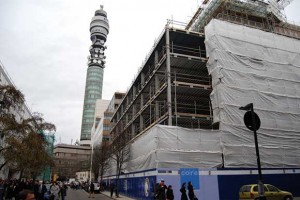 “We’re building three bespoke structures,” is how Mr Doughty describes the project. “Two of these are connected to two parts of the existing structure (Gt Titchfield St and Hanson St), while another (Clipstone St) is a completely new north elevation. The building’s fourth facade (New Cavendish Street) will contain the new building’s residential and office entrance.

All of this work is being carried out literally under the tenant’s noses, as apartments start at the fifth floor – although set-back from the extensions –  and extend up to the ninth level.

Designing three new extensions to an existing city centre building had to take many parameters into consideration, and during the design period it was decided that the new superstructure had to be steel with lightweight concrete floors in order to justify the loads on the existing concrete structure.

Extending portions of the building, which were originally only one-storey, upwards with new steelwork also meant a considerable amount of strengthening had be done at basement level.

The basement originally housed a car park and is being converted into a plant room and management suite while still retaining some parking spaces. Some of the original concrete columns have been strengthened with steel parallel flange channels, while 150 new mini piles were also inserted into the basement slab to accept new steel columns for the new extensions.

“Putting new steel columns against existing concrete columns required a huge amount of drilling,” says Jeff Beverley, Project Manager for steelwork contractor Graham Wood Structural. “And we had to do all the drilling at set times which were previously agreed with the tenants.”

New service holes also had to be drilled through the existing concrete ground floor slab. The majority of these needed steel trimmers at the underside of the existing slab, but where large holes were needed, new steel columns and foundations transfer the loads to the ground.

Not wanting to overload the existing columns was an important consideration as Solomon Tsikkos, Director of structural engineer, Furness Partnership explains: “We have strengthened the original columns where they were accessible, but many under the residential portion were not accessible and therefore it was crucial to limit the loading.”

The structural challenge for the project is primarily the application of additional loads to the existing structure due to the additional three storeys on three elevations. Consequently, the new floors have been designed with steelwork and concrete formed on metal decking.

“To justify the extra loading on the existing and retained lower level columns we specified lightweight concrete for the new floors and utilised live load reduction,” says Mr Tsikkos. “We are adding load with the new floors, but by using lightweight materials for partitions and the new facade’s cladding, we are also balancing the loads.”

The new extensions also have to link into retained parts of the building which in turn dictate the new floor to ceiling heights.

“Because of the headroom limitations we’ve used column sections in most areas. These heavier steel sections gave us the required heights, but also contributed to the 500t overall project steel tonnage,” explains Mr Tsikkos. “Ordinarily on a job of this size the tonnage may only have been in the 300t region.”

“Even so steel was the right material for the project,” adds Mr Doughty. “It is easier and quicker to erect.” 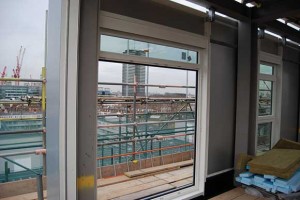 One of the new rooftop penthouses

Another interesting element of the project is the addition of two new penthouses situated above the residential block. These units, both measuring 10m x 15m, are located on a new tenth floor level where the original plant rooms were housed.

Working above occupied apartments meant steel was the only serious choice of framing material for the penthouses. There was a need to minimise noise and the number of trades working on the roof, while timber floors will lessen the loads being transferred down through the existing residential structure.

With thirty years experience of the structural engineering sector, Mr Tsikkos says, Collingwood House is one of the most challenging projects he has ever worked on.

“We had no original drawings to work with, so the job required a lot of exploratory works early on, such as exposing beams, just to see what condition the materials were in.

“We designed the job with a lot of flexibility because we continually found new challenges as the project progressed.”

The project is scheduled for completion by the end of 2008.