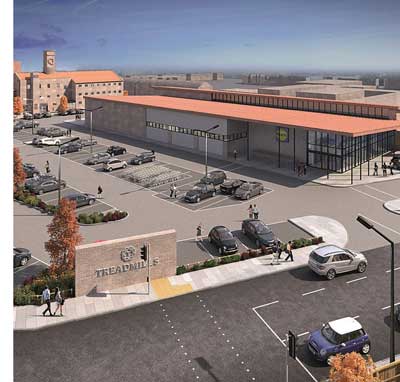 Fast-growing UK supermarket group Lidl has been announced as the retail anchor for the redevelopment of Northallerton’s former prison.

The popular brand will take a 1,950m² unit in the Treadmills scheme – and bring up to 40 new jobs for the local community.

The multi-million pound investment will be the key element of the first phase of the Treadmills scheme, which will also feature another 550m² retail unit and parking for around 130 vehicles.

A detailed planning application for the first phase is expected to be submitted this summer and, subject to planning approval, construction is likely to begin early next year with the Lidl store due to open by late 2019.

As well as the major stores, the £16M scheme will include independent retail units, managed workspaces, restaurants, a cinema, an area for public events and a heritage centre within the 3.5-acre former prison site.

The scheme will preserve and enhance a major part of Northallerton’s history and heritage; regenerate a large brownfield site; deliver a major boost to the local economy; and bring significant new community assets and facilities to the town.

Five listed former prison buildings will be refurbished and incorporated into the Treadmills scheme – whose name reflects that the jail was once home to the world’s largest treadmill and several other treadwheels which were used by inmates sentenced to hard labour.