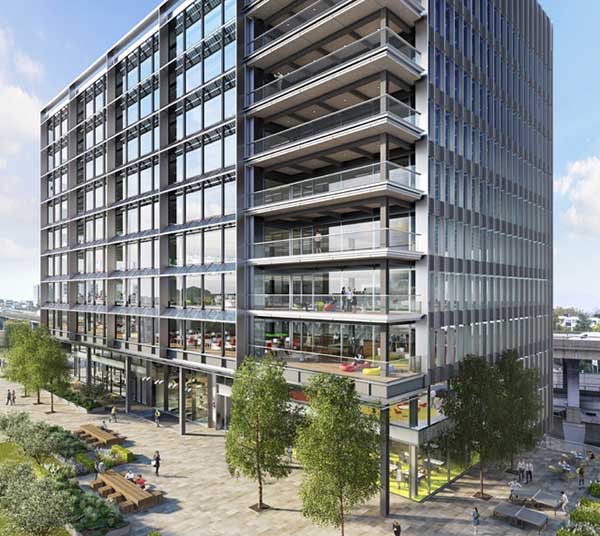 Main contractor Wates Construction will build the 13,500m² steel-framed office project over part of the existing deck of the Crossrail station box next to the Westway in Paddington.

The project is expected to cost around £80m to build and at nine-storeys high it is the smaller of two office blocks planned in the Paddington Central development area.

Following the acquisition of the Paddington Central campus in July 2013, British Land appointed architects Allies and Morrison to review and update the design of 4 Kingdom Street which was originally granted planning consent in 2010.

In 2014, Westminster City Council approved changes to the scheme, and this has increased flexibility to the office floorplates along with improving amenities for occupiers.

The redesigned nine-storey building will have typical floorplates of 1,400m² with each floor having a large corner terrace and a glass pod designed as a creative meeting space.

The core of the building has been relocated to maximise space and efficiency, creating more flexible floorplates and greater optionality for occupiers. The building includes a communal roof terrace which provides outside space for break-out, entertaining and sporting facilities.

Practical completion of the scheme is expected in early 2017.

Robert Samuel, Head of Office Development at British Land, said: “We are excited to be starting our development plans at Paddington Central, and are pleased with the enhanced design of 4 Kingdom Street. The campus already attracts high calibre occupiers from a broad range of industry sectors, and is increasingly seen as a natural extension of London’s West End office market.”