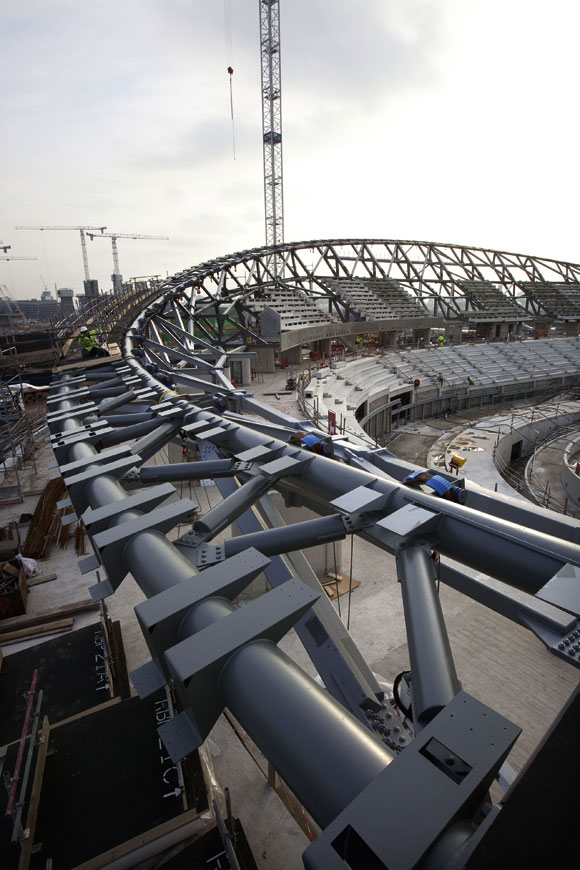 The London 2012 Velodrome, with its eye-catching steel formed double curved roof, is nearing completion and will be the first venue at the Olympic Park to host test events next year. Martin Cooper reports.

Great Britain won more medals at the Beijing velodrome than at any other sporting venue at the last Olympic Games. A total of 14 cycling medals were won, including eight Golds, and many believe this rich vein of form can be carried over to the London 2012 Games.

Whether or not Team GB win more or less medals, plenty of records should be broken as the Olympic Delivery Authority (ODA) is aiming to create the world’s fastest cycling track by tailoring it geometrically and making sure the venue’s temperature is set to optimum conditions.

However fast the cycling track may be, the construction team working on the London 2012 Velodrome have made quick work of the project as it is currently racing towards its completion date of January 2011. This will make it the first venue in the Olympic Park to be completed, with a number of test events to be held throughout the following eighteen months prior to the big event.

It was only in August 2008 that ground preparation works began on land that was previously used as the West Ham municipal tip. Some 48,000m3 of material was excavated to create the bowl for the Velodrome (measuring 60m wide by 100m long), enough to fill 19 Olympic size swimming pools.

The tip contained a mixed bag of materials, including rubble dating back to the Blitz. This meant deep piles were needed for the structure’s foundations and more than 900 were driven up to 26m into the ground.

Supported on the piles, the main Velodrome structure began to be constructed during the summer of 2009. “It is effectively divided into two parts,” explains Richard Arnold, Project Sponsor for the ODA. “It consists of a concrete base and lower tier, with steelwork beginning from a mid level concourse.”

The 6,000 seats are split into lower and upper tiers, allowing a 360 degrees concourse positioned in between the two levels to form a continuous ribbon of full height windows. The ODA says this glazed concourse will offer spectators inside the Velodrome views out onto the rest of the Olympic Park, and at the same time allow people outside views into the venue. 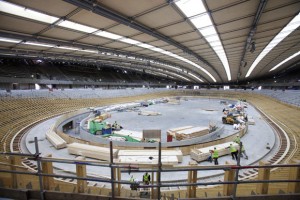 The upper tier of the Velodrome is formed by 48 inclined steel trusses (varying in size from 2m high to 16m high) connected to concrete piers. The lower parts of the truss form the steel rakers supporting the upper tier’s precast terrace units. Because of the shape of the roof structure, the Velodrome has two upper seating areas positioned on either side of the track and suspended within the two curves of the roof.

A tubular steel ring beam sits on top of the steel trusses and goes around the entire perimeter of the structure, in a rollercoaster fashion, supporting and helping to form the distinctive double-curved roof. The ring beam rises in height by 12m from the shallowest point to the highest part.

In a deal worth more than £3M, approximately 2,500 sections of steel were installed by Watson Steel Structures to complete the steel programme on the Velodrome. Much of the steelwork was pre-assembled into bays, and once erected only the steel bracing needed to be added.

The ring beam is formed from two CHS columns connected by tubular bracing and was assembled into 8m-long sections prior to being erected. Watson Steel began its erection of the ring beam on the eastern end of the venue (one of the two low points of the curved roof) and worked its way around the entire circumference.

The cable net is connected to the ring beam at 3.6m centres and the steel ring beam also acts as a circular compression member. “About 25% of the loads from the roof are absorbed by the ring, while the remainder are transfered down to the foundations via the steelwork and concrete directly below,” explains Andrew Weir, Expedition Engineering Project Manager.

Sustainability has played a major role in the design of the structure, according to Mr Arnold. “The Velodrome is 50% lighter than Beijing’s. By using the materials we’ve chosen for the roof we will have produced a lightweight, efficient and sustainable landmark for the northern end of the Olympic Park.”

Strategically placed rooflights within the roof will reduce the need for artificial lighting and also allows natural ventilation inside the venue.

On the choice of structural steelwork, Mr Weir adds: “With steel we gained an openness to the upper levels, whereby plant equipment can be discreetly accommodated within the trusses.”

Now that the Velodrome is nearing the finishing line, attention has most recently been focused on the inside where a team of 26 specialist carpenters have installed 356 vertical timber support trusses to support the track. This was followed by the installation of 56Km of sustainably sourced Siberian timber to form the track itself, on which in 2012 Team GB hopefully pick up plenty of medals. 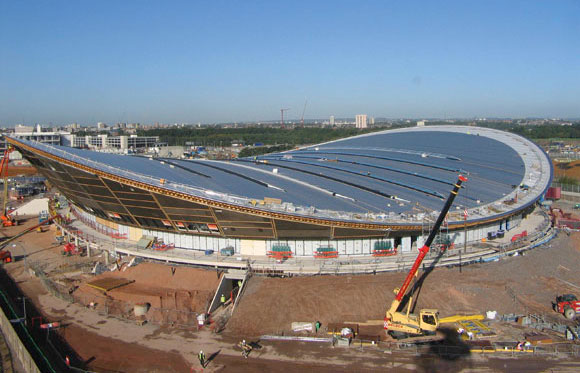 The Velodrome is a lightweight sustainable building