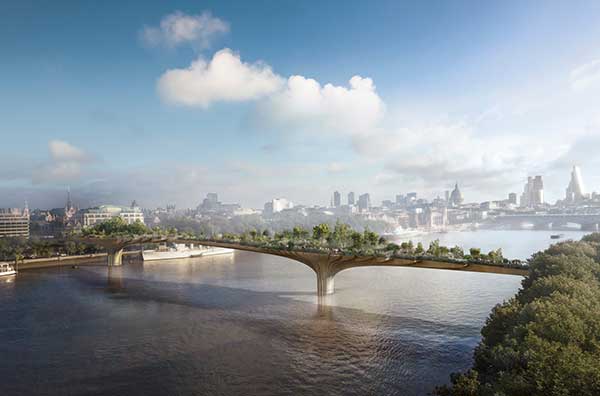 Plans have been revealed for the super-strength cladding that will adorn London’s proposed Garden Bridge giving it a maintenance-free 120-year life.

The £175M steel bridge has been described as a floating garden and will create a new connection across the River Thames between Temple and the South Bank.

The steel superstructure will be surrounded in a copper-nickel alloy coating from its feet on the riverbed up to the base of the balustrades on the bridge deck.

The material is a key element of the design and has only previously been used on ocean vessels and in oil platforms.

It will form a rust-proof skin to the steel structure, protecting it from river and environmental corrosion.

Multinational mining company Glencore will donate the 240t of the material required to clad the pedestrian bridge.

The bridge has been approved by Westminster and Lambeth councils and City Hall with construction scheduled to start by the end of the year.

Progress could be halted however as local residents have launched a legal challenge to the bridge who claim the bridge is an expensive folly.