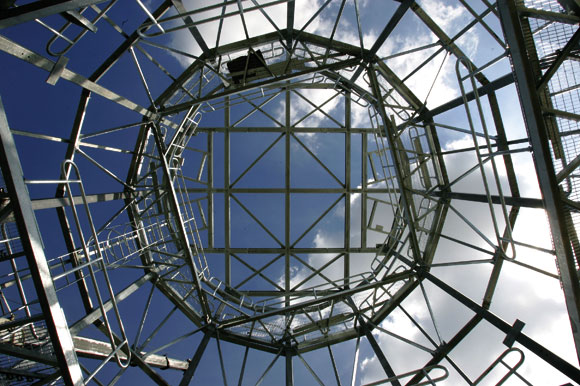 Inside the steel turret

Among some prestigious and highly visible steelwork at Heathrow Terminal 5, one contractor has completed some equally important steelwork below the surface, on the surface and even above the site. Martin Cooper goes air-side to find out more.

When it opens in 2008 Heathrow’s £4.3bn Terminal 5 (T5) will be one of the world’s most advanced airport facilities, boasting 65 aircraft stands with 14 capable of accepting the largest double-decker jumbos such as the Airbus A380 or the Boeing 747-800.

Once complete, it is estimated that more than 45,000t of steelwork will have been used on the airport project. Among this huge amount, Glentworth Fabrications says it has recently fabricated, supplied and is installing close to 1,000t of galvanised steelwork on a range of ancilliary works underground, on the surface and even above the project.

Bob Harrison, Glentworth’s Managing Director, takes up the story: “We’ve installed steel for ventilation shafts going deep into the new underground extension tunnels, while on the surface our ventilation shaft steel at the multi-storey car park is just visible.”

But where’s the steelwork above the project? Well it turns out Glentworth Fabrications’ sister company Glentworth Precision Engineering has manufactured parts for the wings of the A380.

“When the first Airbus super jumbo recently landed at Heathrow it flew over our work at T5,” Mr Harrison explains. “We immediately said to ourselves now we’ve worked under, on and over this prestigious project.” 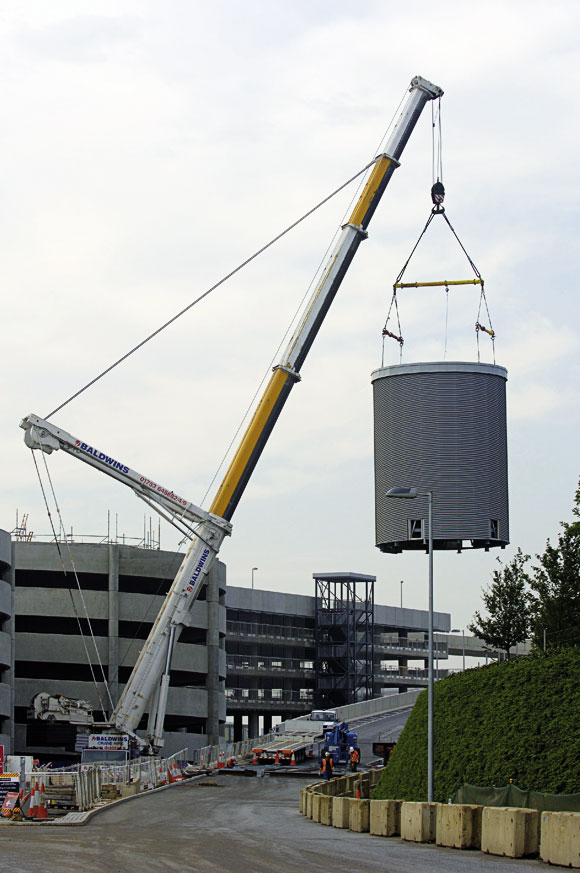 Lifting the steel turrets into the car park’s ventilation shafts 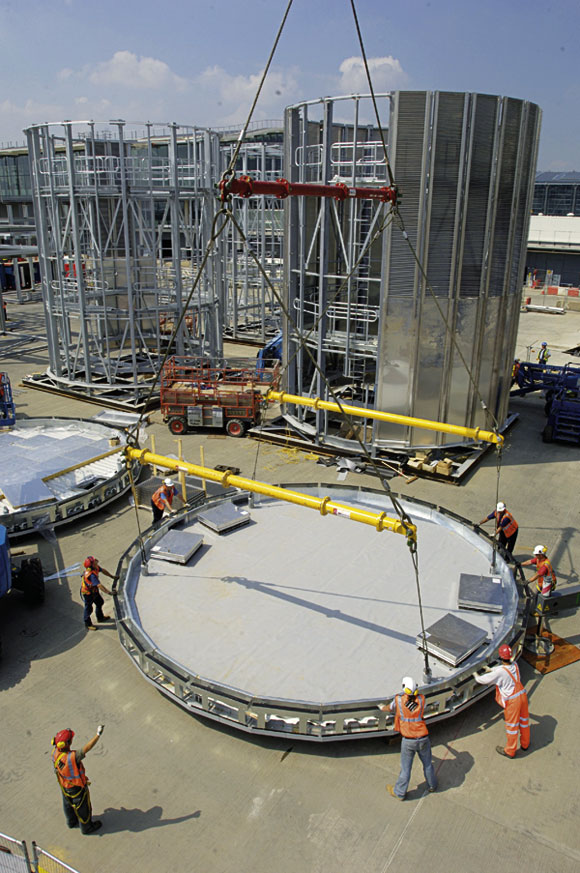 The turrets were erected alongside a live runway

And he’s right, and just to clarify the underground element even further, Mr Harrison also adds that another group company, Glentworth Rail, has recently completed modifying carriage auto-couplers for the entire fleet of rolling stock on London’s Central and Waterloo & City lines.

But keeping to the subject of construction steelwork, Glentworth’s work at T5 has taken on a variety of guises. The biggest contract the company has completed, so far, has been the fabrication, supply, erection and installation of four steel turrets, complete with ventilation fans and staircases, for the multi-storey car park.

Working on behalf of Balfour Beatty, Glentworth constructed the four units – each requiring more than 100t of galvanised steel – on the airfield’s apron.

“Although our jobs haven’t been the biggest contracts on T5, this job was logistically challenging,” explains Brian Mosey, Glentworth Fabrications’ Contracts Director. “In order to speed up the construction process we built the ventilation turrets on site and installed them during two 48-hour weekend possessions,” he adds.

The steel turrets are 9.5m in diameter and 48m-high, and Glentworth’s contract also included installing all the relevant plant and equipment, which added a further 65t to their overall weight.

Constructing the turrets next to a live runway presented a number of obvious challenges, but once complete the units had to then be transported one mile across the airport to the multi-storey car park. “There wasn’t room near the car park to build the units so moving them required four mobile cranes at two locations and a special lowloader which moved the turrets at 5mph across the airfield,” Mr Mosey says.

Using a 1,000t and a 500t capacity mobile crane to install the turrets into the car park’s concrete ventilation shafts was a very tricky procedure as there was only a 40mm clearance. “The lifts had to be exact as the turrets had to fit on to pre-installed holding bolts at the bottom of the 30m-deep shafts,” Mr Mosey adds.

So successfully were the turrets installed over the two weekends, that Glentworth was able to bring the car park’s construction ahead of schedule. Wayne McKnight, Glentworth Fabrications Contracts Manager explains: “The concrete pouring was running late, but after we’d installed our steel units the job was actually two weeks ahead of schedule.”

The four ventilation turrets were all clad with aluminium louvres before being installed during July, and once in position a final top section was bolted on. “It is these sections which are visible at ground level,” Mr Harrison explains.

Installing steelwork in ventilation shafts may have become a bit of a speciality for Glentworth at T5 as the company has also fabricated and installed two steel risers for the new terminal’s underground extensions.

Again working on behalf of Balfour Beatty, Glentworth constructed two galvanised steel units, containing emergency staircases and handrails, on a site adjacent to the shafts. One unit was installed in the 38m-deep shaft D for the new Piccadilly line extension at T5 and the other was inserted into the 32m- deep shaft C which serves the Heathrow Express extension.

“We used approximately 100t of steelwork for each shaft,” Mr Mosey says. “And we erected the complete riser, including stairs, floor by floor, tying the structure into the concrete wall via brackets.”

The company used a 25t capacity mobile to lift individual members down the shaft, and these were then bolted together. Five levels of stairs were also lifted into position individually. Separating stairs and vents, a concrete fire wall was also added.

Glentworth has also installed some galvanised steelwork inside the main T5 terminal building. A total of nine ducts inside the main lift and stair cores of the structure required decked maintenance platforms for the electrical risers.

A further on-going Glentworth contract at T5 involves the company working for Amec and installing fire damper access platforms at eleven locations on the underground extension.

Working deep beneath the T5 project brings with it a whole host of unique challenges including transporting all steelwork by trolley along the extensive tunnel network.

“We take on the jobs the big boys don’t want,” Mr Harrison says. “The work at T5 hasn’t been the most prestigious, but it is still important steelwork,” he sums up. And, of course, not forgetting the company has had the opportunity to work on three levels at T5: underground, on the ground and overground.