Taken from Building with steel, 1967

At practically every civil airport throughout the world the story is the same. Because of increased traffic, both freight and passenger but particularly the latter, expansion of facilities has become imperative. In some instances although generous estimates of future traffic were made when planning the original airports it is obvious that these will in many cases be exceeded even before the planned dates are reached.

Britain is no exception, and extensions are being made and new airports constructed, up and down the country. Speed of completion, economy and suitability for even further expansion are essential requirements for such work, requirements that have resulted in considerable use of steel framed buildings.

Nowhere in the country is this rapid expansion so evident as at Heathrow which now has the distinction of being the busiest international airport in the world. Even after making allowance for the continuing upward trend in world air travel the figures for Heathrow are spectacular: in 1965 approximately 10 million passengers used the airport and in 1966 this total exceeded 12 million. In August last year nearly 1.5 million passengers entered or left Heathrow, the record for any day being 60,040 passengers and 823 aircraft movements, the highest for any European airport.

The average annual increase in air traffic at Heathrow is in the region of 14-17 per cent and to cope with this the British Airports Authority is implementing a massive building programme aimed at speeding the flow of passengers through the airport, one stage of which is the provision of a £2 million pier system in No.1 and No.3 buildings enabling passengers to walk direct into their aircraft. When completed there will be four such piers, two to each building, each with up to eight fingers giving access to aircraft parked nose-in on each side. Two of these piers and the central portion of the other two are now completed.

All piers are of generally similar design, with the passenger walkway at first floor level. The ground floor level is for use by the staff controlling the servicing machines on the apron: engineering equipment will also be housed there. The piers are steel framed, the choice of this form of construction being largely influenced by two major considerations. First there was the need to complete the piers as quickly as possible and second, it was necessary to develop a simple design that could be easily repeated for all piers. It was felt that structural steelwork met this and other requirements more satisfactorily than other materials. The total amount of steelwork in the piers amounts to some 1,400 tons. In addition two piers will be constructed as part of the North East terminal complex described later.

The most recent major project at Heathrow is the £8 million North East passenger terminal complex for British short haul and domestic operators and said to be the largest in the world. It is due for completion in 1968.

The passenger building itself, approximately 600 ft by 275 ft, is planned to accommodate ‘Arrivals’ passengers on the ground floor and ‘Departures’ passengers on the upper level, served by an elevated one-way approach road which also gives access to a multi-storey car park. There are 5,600 tons of steelwork in the main building and 1,300 tons on the coach stations and the two piers. 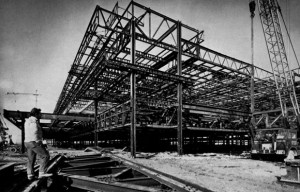 A structural steel frame was selected for the main building for reasons of construction speed, adaptability and architecture, and much of the steelwork is exposed and painted.

The uncased universal columns express the structure elegantly and without obtrusion and are isolated visually from the floors which they support, thus enabling the quality of the large internal spaces to be appreciated.

The staircases are prominent features of the public spaces, constructed with exposed steel stringers, consistent with the main steel frame. Some are similar to those in the last passenger building constructed in the Central terminal area; others incorporate cantilevered landings and considerable use is made of cantilevered construction throughout the building.

The building has a height limitation due to radar clearance lines and sight lines from the control tower and this, together with the necessary clearances for baggage conveyors and other services in the mezzanine and roof voids, imposed severe restrictions on structural floor depths.

Extensive use has been made of castelllated beams to provide continuous access runs for the pipes and ducts of the air-conditioning and other services, and the deep voids are framed wherever possible with lattice girders.

The steel used in the design was mild steel to B.S 15 and high yield stress steel to B.S 968 where there was restricted headroom. The construction is generally shop welded with main site connections of high strength friction grip bolts. The section of elevated road in front of the building is steel-framed, composite with an 8-in. reinforced concrete slab, for which stud-welded shear connections were used: on the airside a road runs within the building providing access for coaches and separating the passenger area from the baggage handling handling accommodation.