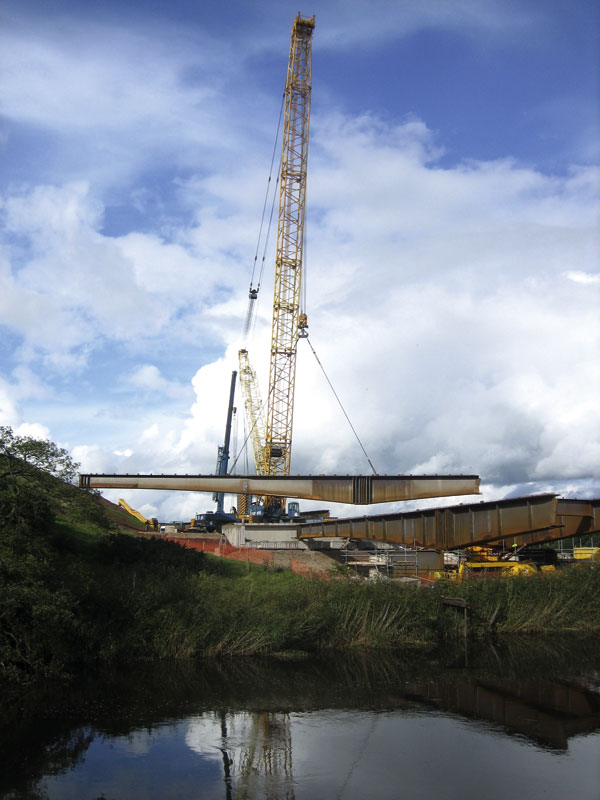 As part of the 5km-long A66 Temple Sowerby bypass in Cumbria, Fairfield Mabey, working as Skanska Construction’s steelwork partner for the Highways Agency, has successfully supplied and erected a bridge over the environmentally sensitive River Eden using weathering steel.

“The river is of special scientific interest because of the wildlife,” Ashley Cooper, Project Manager for Fairfield Mabey explained. “During the design process the decision was taken to build the bridge with weathering steel, which doesn’t corrode beyond the initial Patina, and means there is less risk to the area from the painting operations that would typically be required for a bridge, both during the construction and the maintained life of the structure,” he added.

The Eden River bridge has three spans, two at 34m and a central span of 64m and is four girders wide (25m).

It is a multi girder composite steel and concrete structure with members of varying depth from 1,600mm at the abutments and central span, to 3,300mm at the haunches.

Mr Cooper said more than 1,200t of steel was used for the bridge which was delivered to site in five sections and pre-assembled into three main lifts per girder length.

The bridge works began at the beginning of October and will be completed in mid November with the entire Temple Sowerby bypass opening in 2008.