On track at City of London station 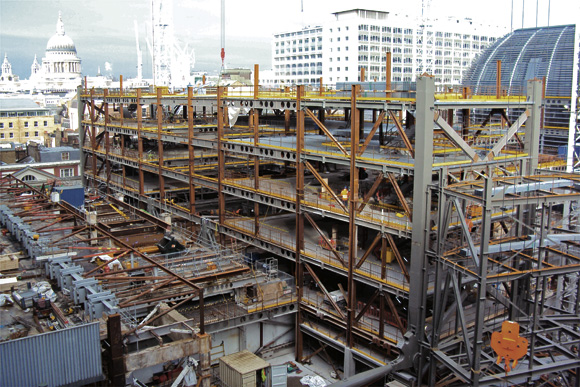 An eight storey office block being built above Cannon Street Station is set to usher in a new and brighter era for the busy terminus. Martin Cooper reports.

Cannon Street Station is one of London’s busiest rail terminuses and among the top ten busiest in the country, serving some 95,000 City workers each day. As well as passengers arriving from or departing to Kent and Sussex, Cannon Street is also a major underground station and consequently rush-hour congestion is not uncommon.

Improvement to the station is sorely needed and work is currently continuing apace to construct an eight-storey 37,000m² office building above a new railway concourse and tube station entrance.

Network Rail and project developer Hines UK says the development will transform the station, making it brighter, easier to use, and more spacious and open, while the new architecturally striking building above will bring presence to the site.

As with most construction projects in the City of London, the job has had to cope with limited space, busy surrounding streets and uniquely, a functioning railway station in the midst of the site.

“This is one of the main challenges associated with the project,” says Giles Fazan, Hines Construction Director. “We are improving the station and building new offices above while keeping everything open to commuters. We’ve achieved this by doing much of the work during nighttime and weekend possessions.” 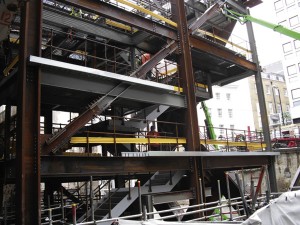 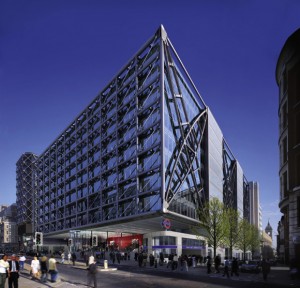 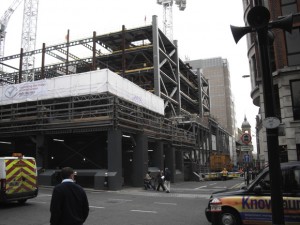 Minimal temporary works are in place at the station entrance 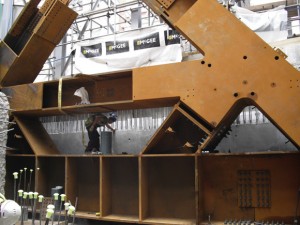 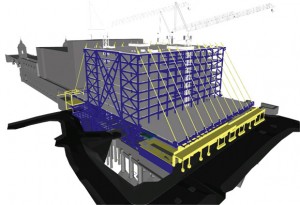 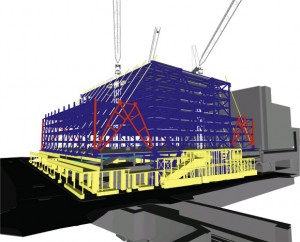 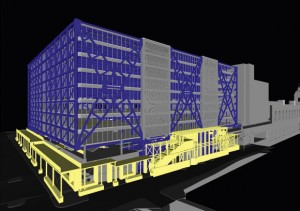 Sequence of erection for the two cantilevers which will involve strand a being attached to the bottom booms. The jacks will remain in place until steelwork is completed

Before work could start on the new structure an existing 15-storey office block situated above the station had to be demolished. This was successfully achieved above the ‘live’ railway station using three tower cranes which had to utilise shielding and netting to avoid slewing over the adjacent roads, as the demolition process took-in the entire project’s footprint. The old structure was dismantled down to its first floor slab, which was also the station’s roof.

“We then had to programme the next stage to suit the best way of keeping the station functioning normally,” explains Andrew Veness, Laing O’Rourke Project Director. “A new deck was installed beneath the old one, with a 1.5m clearance, and once it was completed we then demolished the old deck above, using the new concrete slab as a crash deck.”

The new deck was installed during nighttime shifts to avoid any passenger disruption, using a series of 21m long Fabsec cellular beams.

This new station roof or deck has been described as resembling a giant table as it is supported by four large 17m long steel columns which have been threaded through the station platforms. Weighing 17t each, these large members are made from plated box girders and were brought to site as single pieces. The tabletop, which supports the central part of the new structure, is also supported by four steel braced cores, located in each corner.

“We needed a lightweight solution and that’s why we chose steel for the framing material,” explains Mr Veness. “The cores are also steel because we again needed a lighter solution as they are founded on old foundations and we had to limit the loads.”

The steel cores punch through the station platforms, avoiding the underground railway tunnels. Inside each of the cores at ground level there is a large 14m high steel structure, dubbed an hourglass. Each weighing 100t and assembled from six individual steel girders, the hourglasses help stabilise the deck and structure above by absorbing the loads and distributing them evenly throughout the foundations.

The tabletop deck, which measures 67.5m along its north and south elevations, supports the majority of the steelwork for the new structure. Steelwork can be divided into three sectors consisting of 12m, 21m and 12m spans in the east to west direction, sitting directly on the tabletop deck. There are then two further sectors with 21m spans over the north and south elevations which cantilever off of the deck. The grids do not alter for the entire structure’s floorplan and offer the building large column free office space.

The steel erection, being undertaken by Watson Steel Structures, initially involved erecting the central area of the building (above the tabletop) up to the topmost eighth level.

Once this was completed, the two 21m wide x 67.5m long cantilevers will be erected to the north and south elevations.

These two cantilevers are substantial by any reckoning and an innovative construction solution was required. Because of their dimensions and the amount of steelwork involved, temporary supports were ruled out as the current station entrance could not have supported large temporary works as there are underground lines just below street level (see box on previous page).

There will be 12 hydraulically computer operated jacks positioned on each elevation and as the two cantilevers are progressively erected, the increased loads mean the jacks will absorb the extra loads and deflect them into the already completed parts of the structure.

Only when the cantilevers are fully erected will the strand jacks be removed. The cantilevers will by this stage be fully supported by metal decking and bracing, which will allow the concrete slabs to be poured.

The east and west elevations of the structure both feature three large cross bracings, known as X-frames, formed by two 16m long beams bolted together in the middle. Four of these are positioned along the 21m cantilevers and act as bookends to the cantilevers, taking loads down to foundation level.

Meanwhile, the front elevations of both of the cantilevers are formed by storey high trusses which help keep the spans rigid and pick up the loads from the secondary beams and transfer them to the X-frames. These trusses feature centre columns spaced at 6m intervals with conjoining diagonal ties, which in turn form one large truss which covers the whole elevation. The perimeter members of the trusses are 762mm CHS members, while internal members are slightly smaller 457mm CHS members.

“Timing of deliveries is playing a major role in this project, “ sums up Alex Harper, Contracts Director for Watson Steel Structures. “Each truss features 33m long CHS members which are bolted together on site to form the 67.5m lengths, and these have to be brought to site at night which is when we will be erecting the cantilevers.

“As well as this we have erected the steelwork around the other trades as various stages of the job are overlapping, and as areas have been freed up after demolition we’ve moved in.”

Steelwork for the central section of the project has been completed (as of early April) and work on the cantilever sections has now begun. The steel package is due to be completed by late July with the entire project scheduled for completion in June 2011. 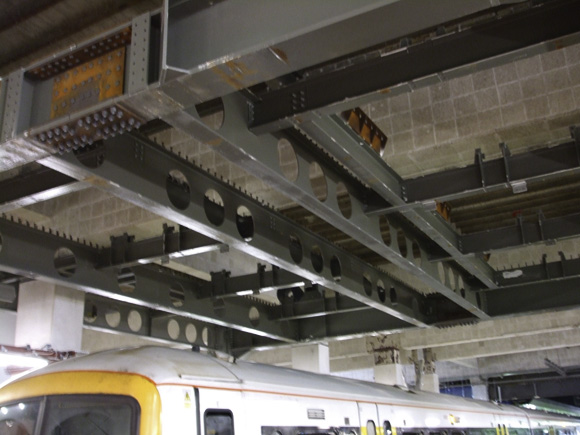 The proximity of the Circle and District Lines’ underground tunnels to the surface at the front of the building and the fact that the south side of the structure sits alongside a scheduled ancient monument, meant the design had to incorporate suspended or cantilevering north and south elevations.

Jim Fraser, Foggo Associates Project Engineer, says: “We needed to avoid putting columns in these areas and minimise digging, so large cantilevers were the answer. The fact that we are building over a ‘live’, station also drove the design to use steel and dictated where we could place columns. We’ve had to place internal columns through platforms, and either side of the original Victorian viaduct which carries the railway lines out of the station and onto the bridge over the Thames.”

The new 21m spans in the station, which have been created by the ‘deck’ (ground floor slab of the new building and station roof) mean there are also less columns than before. This has successfully opened up the station’s concourse making it brighter and more passenger friendly.