New interchange checks in at airport 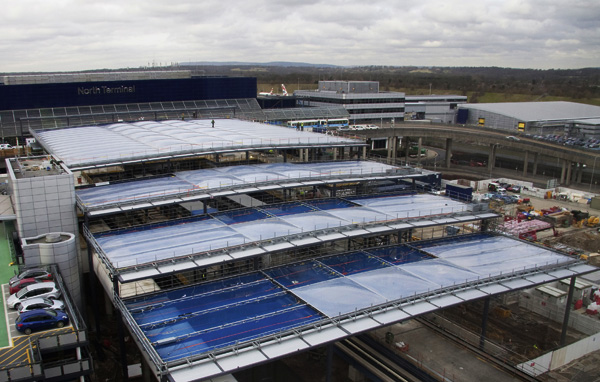 To accommodate an increasing volume of passengers at Gatwick, the UK’s second busiest airport, a development programme is in full swing which includes a new North Terminal Interchange.

Measuring 100m long by 60m wide, the new interchange will be housed in a 20.5m high steel framed structure which will provide a light, airy, low maintenance space for the airport’s passengers.

The new structure has three levels, ground floor offering access into the arrivals hall; first floor serving the new ITTS station and the hotel; and second floor serving the terminal’s departures lounge. All floors will have access to the existing short stay park as well as a second multi-storey car park which will be constructed adjacent to the NTI on a site currently occupied by the project team’s cabins. 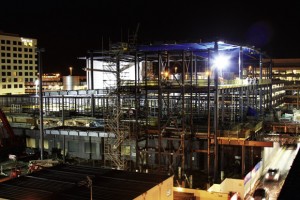 Construction of the new station for the NTI required the demolition of the existing station structure then building a replacement around the existing tracks. The works immediately adjacent to the tracks were undertaken within a five-month possession of the rail infrastructure.

All steelwork and concrete floors for the project are being undertaken by Bourne Steel and it has been on site since September. One of its initial tasks was to erect new enclosures for the ITTS at the North Terminal railhead. The steel framed enclosures, which will house the platform’s separate boarding and exiting doors, are positioned to sit above and either side of the two existing tracks which in turn are supported on a concrete runway.

Each of the two enclosures measures 57.6m long by 3.75m wide and 3.85m high. In order to speed up the erection and not impinge on the site’s other steelwork elements, the enclosures were brought to site in fully assembled modules, eight in total, measuring 14.4m long.

“Bringing the fully assembled modules to site allowed us to erect all eight in just two days,” says Bourne Steel Senior Project Manager Guy Shepherd. “Because of the speed of erection it also meant we didn’t interfere with the main frame’s roof erection which was already underway.” 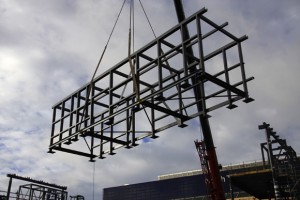 Fully assembled modules were brought to site for the train enclosures

Using a 160t mobile crane to lift the 8t modules into place, Bourne had also installed additional steel bracing to the enclosures. Consisting of strengthening 203 beams and CHS bracing, this steelwork kept the modules rigid during transportation to site and for the duration of the erection process. Once each module was in place, all temporary steel was removed.

In order to make space for a large column free area around the enclosures and the adjacent platforms a large 22m long bowstring truss straddles the ITTS zone. This large truss, which was brought to site in two pieces, also partially carries the upper (second) floor slab.

The main frame for the NTI is attached to the North Terminal along the western elevation and is formed by a series of 508 x 16 CHS columns. These columns will all be left exposed, along with their connections, as they provide a feature element to the project.

The main steelwork structure is portal frame design with three spans of 20m. The two outer bays have a sloping roof member, while the middle bay has a curved beam, giving the roof its desired camber.

“The 20m long beams were brought to site in one piece, which isn’t particularly long, but they’re reaching the maximum length we could transport into the airport site,” comments Mr Shepherd.

Steel braced lift shafts are positioned on either side of the NTI  and provide the overall structure with its stability. Offering access to the short stay car parks the lift shafts were the first to be erected, with the two floors and their supporting columns then erected between them. Finally the steel framed roof was erected which has since been covered with 3,000m2 of inflated ETFE.

Although it will have rain screens and wind protection, plus shelter from existing buildings such as the adjacent multi-storey car park, the new NTI will essentially be an open-sided structure. To allow the later installation of the fabric wind screens, Bourne has installed a series of lugs around the perimeter steelwork which the screens will be tied to.

In terms of complexities, the proximity of other operational airport facilities is a significant engineering challenge,” sums up Brendan Conlon, Costain Project Director.

“At the east side there is the airport hotel and we are literally digging up their front doorstep and reconstructing their hotel reception area. To the south, the new structural steelwork is just 300mm away from the existing multi-storey car park. Immediately to the west is the existing road and passenger drop-off and pick-up point.  To the north are temporary buildings for airport engineering and maintenance staff.  The only barrier between us and the public and airport operations is the site perimeter hoarding.”

The completion of the NTI is scheduled for May 2010.