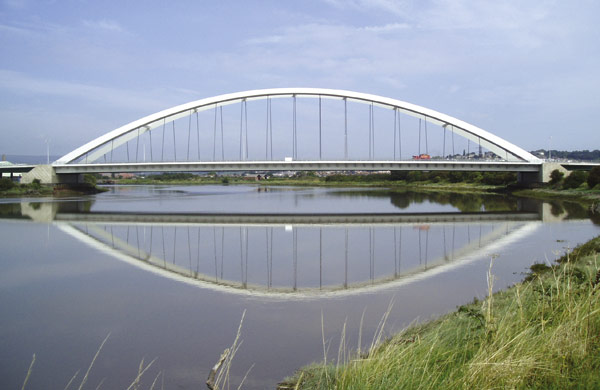 With the new river Usk crossing the construction team have created a landmark structure designed and built in an extremely compressed timescale.

The outline design and the decision to go for a bowstring arch, in which the road deck acts as a tie resisting the horizontal forces at the arch springings, was by architect Ronald Yee of Yee Associates for client Newport City Council.

“We and the client were eager to create a family of bridges. We looked at all the possible types and concluded that a bowstring would be most appropriate, coupled with the fact that Newport did not have a structure of this type already.”

The bowstring arch would create a landmark which would become recognised as a symbol of Newport. Built of steel, it would reflect the area’s industrial heritage.

Main contractor Morgan-Vinci won the design, build, finance and operate contract, with Faber Maunsell as designer. Fairfield-Mabey was appointed steelwork contractor. These three worked extremely closely together on the design.

Once the DBFO contract was signed, “everyone was champing at the bit to get started”, says Faber Maunsell Technical Director Charles Cocksedge. There was no time for the traditional approach in which the engineer produces a completed design and passes it to the steelwork contractor: “We worked back from the completion date and found that Fairfield-Mabey would need to begin ordering steel less than two months from the start,” says Mr Cocksedge. “So we began by asking what can be designed first?” 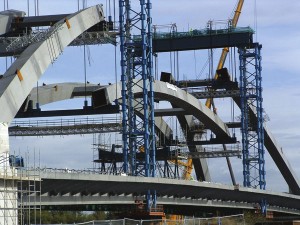 Fairfield-Mabey chose to do the cross-girders of the ladder frame deck: these span between the two tie girders, support the road and are relatively self-contained as far as design is concerned.

These were followed by the tie girders and finally the arch itself. The arch is formed from a fabricated box section, a good shape for a compression member, a constant 2m wide and ranging from 2m deep at the crown to 3m at the springing.

The two tie beams are 2.5m deep I-sections, chosen because this is a more suitable section for attaching the cross beams and is less expensive to produce, with 1200 x 60 mm flanges and a 40mm thick web. The most complex area to fabricate was the corner where the arch and tie beams meet — at this point the tie girders widen out into a box section.

The design was critically affected by the construction sequence, which also had to be considered. The arches were fabricated in 10m lengths, and welded together on site with three sections each side. The four end sections were lifted into place by the largest available mobile crane in the UK, capable of lifting 1200t.

Even this did not have the capacity to lift the 75m centre section of the arch into place. Instead this section was prefabricated, moved along the deck on skates and then lifted into place using strand jacks.

“The weight of the centre section was an important load case for the design of the deck cross girders, which we were designing at a stage when the weight of the arch was not precisely known,” says Mr Cocksedge.

Construction of the deck was extremely rapid because Morgan-Vinci prefabricated the deck sections in 3m x 5m concrete panels at the site. The panels are supported on the flanges of the tie girders and cross girders, leaving room for insitu stitching strips to be cast afterwards to tie the deck together.

From a design point of view this has the advantage that the tie beams take all the tension, and are free to extend under the dead load of the deck, by about125mm, both of which help to avoid the risk of the concrete cracking.

With the deck stitched together, it acts compositely with both the tie beams and cross girders to resist bending stresses due to traffic.

Fairfield-Mabey Project Manager Julian Mason says: “This was the largest box arch structure we’ve constructed for a while.” Traditionally, he adds, at this sort of span a trussed arch rather than a solid box used to be more common.

“The geometry was particularly complex because it’s a parabolic arch which is also inclined,” he adds. Whereas in the past the shape might have been approximated by fabricating it in a series of straight lines, the Usk arch was modelled in 3D and cut using automated machines to create a true parabola. As an additional complication, dead-load precamber was added to cancel out the calculated deflection of the arch centre section under its own weight.

The bridge opened at the end of last year after being completed ahead of schedule. The judges’ verdict was: “The Usk crossing symbolises the best in British bridge engineering. It combines an elegant design, high quality fabrication and innovative construction.”