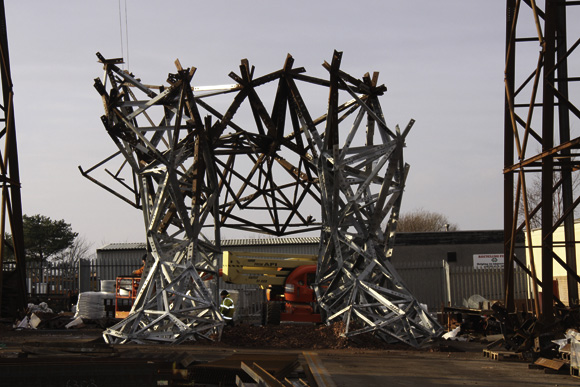 The statue’s feet take shape in Had fab’s yard

Consisting of more than 500 complex steel nodes and 16,000 bolts, a UK based steelwork contractor is currently fabricating the latest Antony Gormley masterpiece for a client in The Netherlands.

The Dutch town of Lelystad has commissioned the latest unique statue designed by the prominent UK sculptor Antony Gormley. Renowned for the famous ‘Angel of the North’ his new creation is a 25m high crouching man, completely constructed from steel angle profiles.

Steelwork for this complex piece of modern art is being undertaken by Had Fab, based in Haddington near Edinburgh. The company has many years experience of producing complete structures, fixtures, fittings and towers for power and telecommunications. 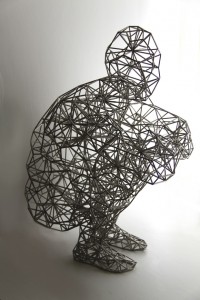 Model showing how the statue will look 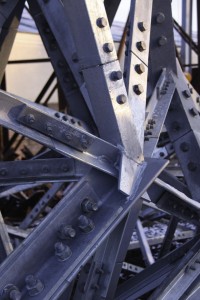 Had Fab is now utilising this expertise to produce the crouching man statue. “We’ve been in contact with Mr Gormley discussing this project for about five years,” says Had Fab’s Managing Director Simon Harrison. “Numerous companies were initially contacted by him to produce the complex steelwork but most refused the job after completing feasibility studies.”

Mr Harrison says his company’s ‘can do attitude’ was eventually instrumental in securing this contract, however, while there are many challenges to overcome he has every confidence in the technology and the people in his employ.

Initially the statue evolved from a plaster of Paris model of Mr Gormley himself in the desired crouching position. This work formed a shell which was then taken to Cambridge University, who then produced a wire diagram by using surveying technology.

Once this initial shape was designed the wire diagram was then detailed in a Tekla Structures’ programme and interfaced with Steel Projects’ Winsteel to produce machine codes for Had Fab’s FICEP machinery angle line.
Angle profiles for the statue are punched and sheared to length by the company’s FICEP machinery before highly skilled labour intensive shaping of the material is done to form the required 550 nodes.

Producing these 2.5m diameter nodes is extremely time consuming, and Mr Harrison says some have up to 27 angles meeting together to form locating points around the structure. “Every angle member is a different length and are produced from sizes ranging from 60mm x 60mm to 200mm x 200m steel sections. We are fabricating directly from the computer model with a laptop on the shop floor, as conventional 2D drawings are not suitable for communicating the fabrication information that is needed by the shop floor assembly team,” he adds.

In total there will be 32,000 holes punched or drilled in the angle profiles and the total weight of the structure will be 60t.
Had Fab is currently fabricating and trial assembling the entire statue which has galvanised fully welded joints as well as bolted connections requiring some 16,000 bolts.

All of the angles are produced on a specially designed jig before being assembled in the company’s yard.

Once the entire statue has been assembled and completed it will then be dismantled and shipped across to The Netherlands where Had Fab will reassemble it over a six week period. 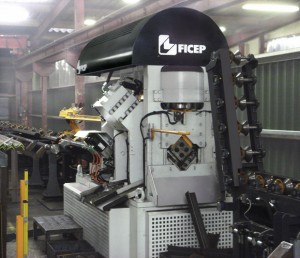 The crouching man is being produced on the latest FICEP HP16T6 CNC angle line. This unit is said to have numerous optional extras available and can be configured to meet the customer’s precise requirements. The machine has an infeed transfer speed of up to 100m per minute and can be equipped with automatic feeding and loading, punching, drilling with tool changer, notching, marking utilising cassette or individual characters, quick change punch and die sets, quick change shear blades and automatic part unloading for the out feed conveyor. The machine was purchased prior to this prestigious project getting started and brings the total number of FICEP machines at Had Fab to four.

Mark Jones, FICEP’s Managing Director, says: “We were delighted that Had Fab chose the FICEP machine to produce the hundreds of steel angle profiles required for this one-off unique structure. This project clearly demonstrates how technologically advanced CNC machinery and manual fabrication techniques can work together efficiently to produce highly complex structures. The technical challenges of the design, detailing, equipment performance and quality fabricators has been extensive. Had Fab‘s expertise and production capabilities were instrumental in securing this contract.”