The power of recovery 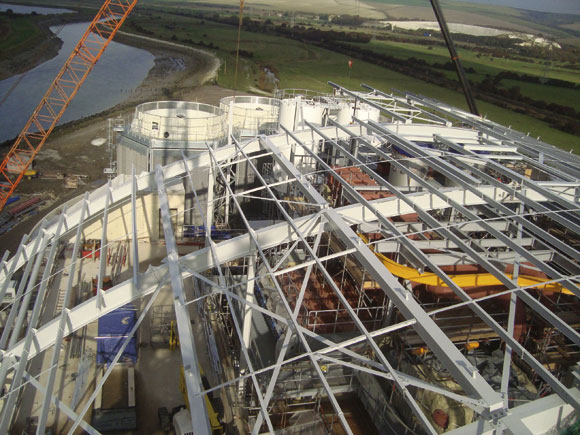 An architecturally driven energy recovery facility is under construction in the East Sussex port of Newhaven. Martin Cooper reports from a plant gearing up for imminent operation.

Main client: Veolia Environmental Services
Architect: S’pace Architecture & Environment
Main contractor: AE&E Inova/HOCHTIEF Construction
Process designer: AE&E Inova
Structural engineer: HOCHTIEF Consult Building/Infrastructure
Steelwork contractor: Graham Wood Structural
Steel tonnage for the roof structure: 800t
Total Project value:£140M
The need to find alternative methods for waste disposal is gathering pace. With landfill sites becoming full there is an immediate need to find new ways to deal with the UK’s ever increasing tonnage of waste.For many the answer lies with energy recovery facilities (ERF), where waste is burnt, producing heat and steam to drive a turbine, which in turn generates power.A number of these facilities have been constructed in recent times, as local authorities see it as a win-win situation of environmental waste disposal with the added bonus of surplus power which is exported to the National Grid.However, no matter how environmental and cost effective, there is still quite often local opposition to these plants being located in or near residential properties. These possible doubts have led a project team in Newhaven to design and construct one of Europe’s most architecturally-driven energy recovery facilities.Here on the East Sussex coast and only a stone’s throw from the port’s town centre, a new plant is nearing completion. When operational this ERF will take receipt of some 210,000t of municipal solid waste each year, to be treated in two boilers. Power generated will run the plant with a net surplus of about 16.5 MW also being produced.

Taking into account the close proximity to the town and the adjacent Area of Outstanding Natural Beauty, this plant has been constructed as something more aesthetically pleasing to the eye than the average energy from waste plant.

These facilities are often large rectangular buildings that dominate the horizon. At Newhaven, planning conditions limited the height of the main building, and this was one of the reasons the project’s designers, in conjunction with the local planning authority, decided on the facility’s orientation running parallel to the River Ouse and arched in shape. 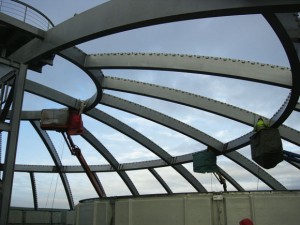 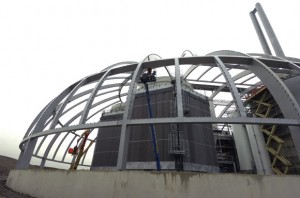 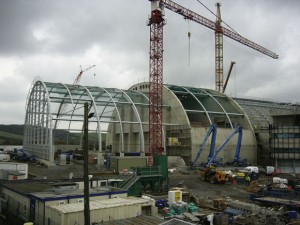 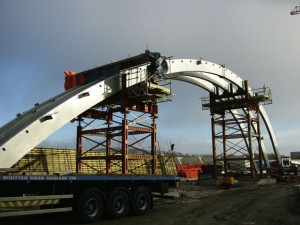 Plate girders are readied for the long welding procedure

“The plant will present a positive image with its innovative shape,” explains Andreas Clausen, HOCHTIEF Senior Site Engineer. “It can be seen from the major routes into Newhaven as well as the town itself, and that’s one of the reasons for its special architectural design. The plant structure is incorporated and adapted into the geography of the area.”

The substructure, which includes a 17m deep caisson formed for the furnace grates, boilers and refuse bunker (a design feature to further limit the height of the building), is formed with reinforced concrete. The lower outer walls and adminstration block are also concrete. The steelwork has been erected, by Graham Wood Structural, on top of and over this concrete structure and most of the facility’s installed process equipment.

“The installation of heavy process equipment such as boilers and filter system within the building had to be completed before the commencement of steelwork for the building envelope. This sequence enabled commissioning of the plant to commence in early 2011.” explains Mr. Clausen.

The north end of the facility houses the air cooled condenser and silos, a part of the structure where the elliptical roof arches downwards to form a ‘nose’ feature. The steel frame for this section begins at ground level and was constructed with a series of long plate girders, with the three main ones requiring 24 hour welding.

These three main 1m deep girders were brought to site in 20m long transportable lengths. They were then assembled on site into two halves, one 40m long and the other 60m. In a dual crane lift these girders were lifted into position and held by temporary brackets while one final weld was needed to join them together to achieve the arch’s 24m height.

“Because of the girders’ thickness a 600mm × 1,000mm all-round butt weld was needed and the best way of doing this was in one continuous twenty four hour weld,” says Graham Wood Site Manager Pat Whelan. “As well as being easier, the procedure meant we were able to keep an ambient temperature within the welding enclosure, albeit the work was done during a blizzard!”

Once the stability giving main girders were erected, the rest of the arched and rounded silo frame was constructed. This consists of a spine beam and a steel compression ring that holds the steel skeleton in place. A series of secondary curved girders then form the remainder of the shape by radiating out from a central spine.

The secondary plate girders are similar to the main girders, except they are smaller and only have bolted connections.

Adjoining the silo area the arched steel frame then covers the boilers, refuse bunker and the remainder of the plant’s processing equipment, a distance of some 80m. This zone is formed with a series of curved steel members which were assembled on site from six 18m long sections. Once assembled each of these 33t girders were lifted into place with the aid of the site’s tower crane or a large crawler unit.

Forming the remainder of the arched structure, secondary beams were crane installed and accessed by Mobile Elevated Work Platforms (MEWPs) positioned on the internal concrete structure. For the area over the refuse bunker, access machines had to be positioned on the bunker’s pit slab, a full 42m below the roof level.

“Finding locations for our MEWPs was a challenge as the building we were erecting over was full of equipment, and other trades were always working around us,” comments Mr Whelan.

“To find an access strategy for the erecting of the structural steel over the deep bunker was the most challenging in this part.”

The southern end of the facility doesn’t feature a rounded “nose”, instead it is straight ended as this part of the plant accommodates the tipping hall.

The tipping hall has one concrete wall with large incorporated vehicular tipping chutes, while large arched steel girders form the main frame. These sections are 600mm deep plate girders, assembled on site into two halves. Erection was then completed with the aid of large steel support structures, which were left in place as each girder was bolted together and positioned.

Steelwork erection for the Newhaven ERF has been completed and the construction is now nearing its completion date. The first waste at the facility is scheduled for summer 2011, while the final handover to the client is due at the end of this year. 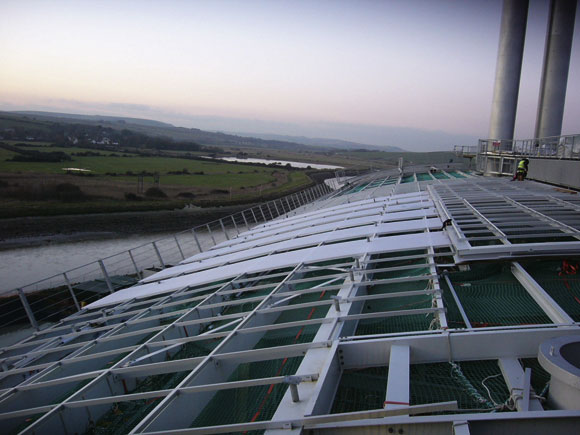 “The architectural shape of this plant gave us new challenges for the structural steel erection and cladding installation, which were professionally and successfully handled,” says HOCHTIEF Senior Site Engineer Andreas Clausen. “The highly engineered cladding materials support the architectural vision and were installed in what we believe is the first time for this shaped profile.”

The southern part of the building (Tipping Hall, Bunker Hall) has a metallic façade as it is covered with KALZIP, the Boiler Hall and the southern end wall is clad with lightweight polycarbonate panels, while the northern end of the building (air cooled condenser and silo area) a composite steel mesh will be used.

“For the erection of structural steel as well as the installation of cladding systems we only used UK businesses,” Mr. Clausen adds.