Making a splash with steel 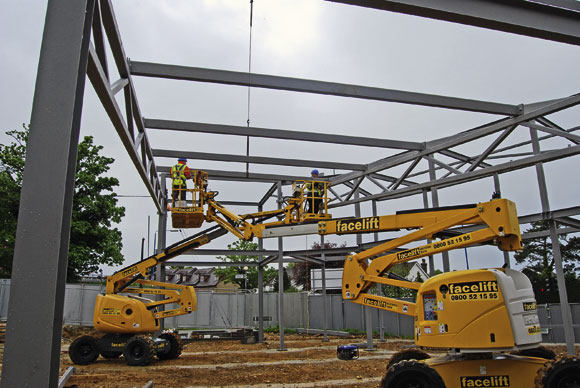 Steelwork is being erected by a four man erection team

Steelwork’s aesthetic appeal has come to the fore in the design of a new swimming pool and library complex in Bromley.

Work has commenced on a new swimming pool and library complex in Biggin Hill for the London Borough of Bromley. The new centre is expected to become a focal point for the local community and will provide a range of services within a high quality, purpose built accommodation.

Ian Gifford, Director of ISG Jackson’s public division, says: “There is a great deal of excitement about this facility as the scheme represents a major investment in leisure amenities by the council.”

ISG started work on site in January when it began clearing the site in readiness for the construction of the new steel-framed structure. The building will house a 25m long six lane swimming pool with changing rooms, a two-storey library, a ground floor cafe and pool viewing area, a children’s party room, community meeting rooms and an IT area.

The contemporary design of the leisure complex will feature large areas of faceted glazing to the facade, alongside striking translucent cladding panels and a sustainable green sedum roof.

The architectural design also incorporates exposed steelwork within the building, exposed glulam timber beams above the pool and an absence of prominent ductwork, which all help to create clean lines to minimise overall maintenance costs. In keeping with this design philosophy, all steelwork connections will also be left exposed as architectural features. 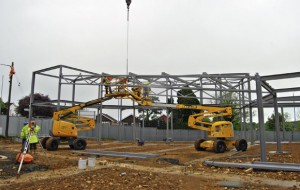 “Because of this highly architectural design, the structure was always going to be a steel frame,” explains ISG Contracts Manager Gary Fenner.

Steelwork for the project is being fabricated and erected by Coventry Construction and the majority of its work was completed in an initial four day programme.

“Because the site is quite small and confined, we erected the front of the structure first, which incorporates the two-storey library and one side of the pool building,” says Mike Steele of Coventry Construction. “We will then come back after a few weeks to complete the columns around the pool and erect the glulam beams.”

The gap between the two steel phases allowed ISG to compete the front of the building and excavate the pool, work which would have been difficult if the entire structure had been fully erected.

Coventry Construction has utilised a four man erection crew and one 50t capacity mobile crane for its on-site programme.

“It’s not a large tonnage to erect but we’ve had to erect a few tricky zones, such as the curved frontage of the structure which has been completely formed with straight members,” adds Mr Steele. Steel has been erected around an off-set grid due to the shape of the site, but the majority of columns are spaced at 6m centres.

The new facility is scheduled to open its doors to the public by early 2010. 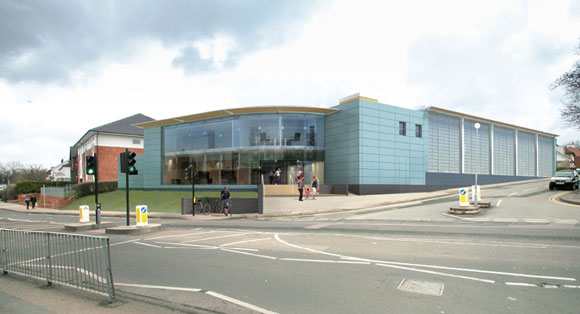