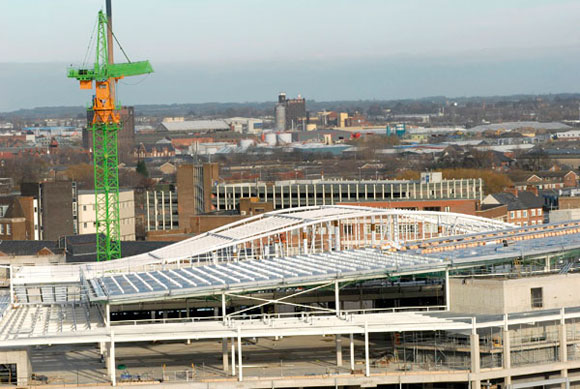 The new multipurpose St Stephen’s development has benefited from a number of important steel elements including more than one mile of shop front steel.

The city of Kingston-upon-Hull has committed more than £1.5bn on a raft of new developments during the past five years. These landmark projects are set to transform and reshape the skyline, with one of the largest on-going schemes being the 40-acre St Stephen’s mixed use development.

This city centre project sits adjacent to the main railway station and will comprise 30,000m² of retail, 14,000m² of leisure, 220 homes, a hotel, 1,550 car parking spaces and a new home for the locally acclaimed Hull Truck Theatre Company and the Albemarle Centre for children’s music.

Scheduled to be completed by the Spring of this year, the project is anchored by a large 10,200m² Tesco supermarket which Jaime Greenock, Project Manager for Bone Steel, says is the largest steel element of the project requiring approximately 700t.

The Tesco store is basically a large single-storey warehouse erected on top of a concrete slab. “This building was erected with multi-span columns and cellform rafters,” Mr Greenock says. 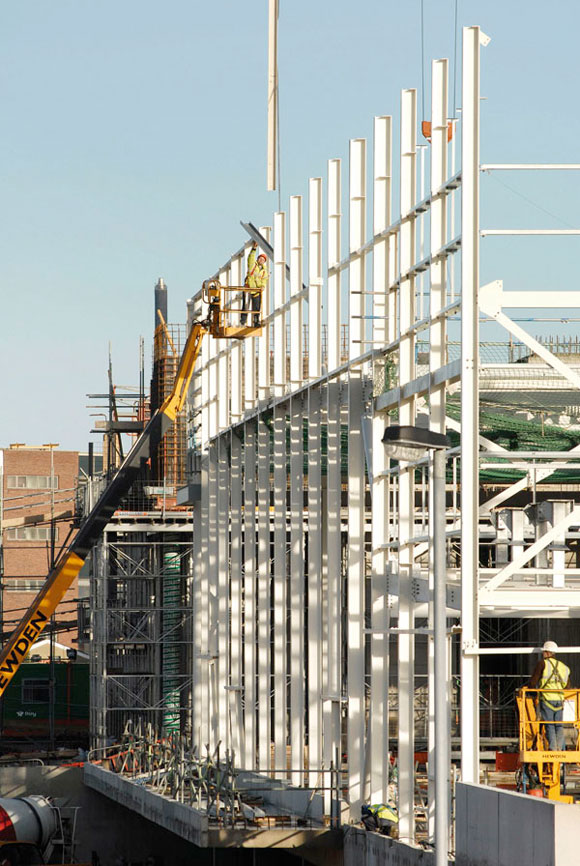 All of the Tesco store’s columns can take extra loading 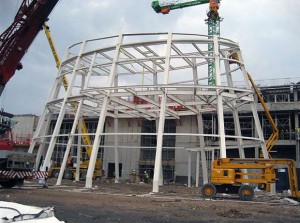 Although the 8.5m-high store is linked to an adjacent mall, it is an independent structure designed to incorporate large open plan areas. The building has a footprint of 120m x 84m and consists of 20 bays, each 6m deep.

However, what has made the Tesco store interesting, for those involved, is the 1,500m² mezzanine level.

“Originally a mezzanine level was in the client’s plans, but we were later instructed to omit it,” Mr Hinde says. “However, in anticipation of it’s reinstatement, we designed the building to work with or without the mezzanine. It has since been reinstated.”

Mr Greenock agrees and says: “All columns, external and internal, are capable of taking the extra floor level.” By adding the mezzanine level, Bone Steel will supply another 200t of structural steelwork and approximately 1,500m² of decking.

However, reinstating the mezzanine level at a relatively late stage means the erection process will be a little challenging. The Tesco store is nearly complete, including the roof. Adding another floor level inside a finished building means doing the erection without the aid of any cranes.

“There’s no room inside for even a small mobile crane and the concrete slab probably wouldn’t take the weight,” Mr Greenock says. “We’’ll be using telehandlers to bring the steel into the structure and to do most of the steel erection.”

The entire project is centred around a curved 200m-long mall, covered by the development’s signature steel wave-like roof. With the Tesco store situated at one end, there are retail outlets of differing sizes arranged along the mall on two levels. Although both sides of the mall are essentially concrete structures, there is some significant steelwork.

A large steel roof covers the retail and cinema complex, which is situated on the mall’s southern elevation. Constructed on top of concrete columns, the roof covers an area of some 10,000m². Mr Hinde says, a lightweight steel roof for this concrete structure was always planned as it offers a quick and cost effective solution.

Large open areas were important in the retail outlets and cinema complex, so cellbeams were predominantly used with some spanning up to 30m.

“As the roof follows the curvature of the mall, most of the grids are different and this proved challenging in the design stage,” explains Mr Hinde. “We also used cellbeams where necessary, instead of trusses, as this was more cost effective.”

“Erecting this roof meant we were continually punching off concrete,” says Mr Greenock. “Some of the concrete columns were cast with bolts which allowed the steel members to be easily installed, and on the perimeter columns there were cast in plates and we welded the beams to their fins,” he adds.

The roof also supports the adjacent signature roof over the mall. “We had to take the extra loading into account and use a robust bracing system,” says Mr Hinde.

Beneath the roof along the mall itself, Mr Greenock estimates Bone Steel will eventually supply and erect more than one mile of shop front steelwork and perimeter louvre steel around the outside of the Tesco store. “Much of this is dummy steelwork, covering up the concrete columns,” says Mr Greenock. “Aesthetically, steel looks better than concrete.”

More than 400t of steel is being used for the eight level hotel which is being constructed on top of the development’s concrete car park.  Mr Greenock explains the decision to use steel for this part of the project. “ A steel-framed structure is lighter and also quicker to erect,” he says.

To the north side of the hotel stands the Albemarle theatre building which Mr Greenock says has been the most challenging aspect of the whole project.

The steel-framed theatre consists of a main rectangular three-storey block with an elliptically-shaped music centre building attached to the front. “The music centre is oval and needed 14 skewed columns as its frame,” says Mr Greenock. “They couldn’t be conventionally bolted down using base plates because they’d just fall over, so we had to tie them together with cross members using a frame.”

Bone Steel had to pre-assemble the steel frame on site and then build this frame into another frame. This then created the oval shape and the gaps were filled in with beams.

“The structure had to be supported until the first concrete floor was poured,” says Mr Greenock. “Up to this point it wasn’t stable.”

For logistical reasons the oval-shaped structure was erected first and then the rectangular block was built around it.

Mr Hinde says the music centre structure lent itself to steel design. “It looks a little like a tee-pee. The geometry was again challenging, with both elliptical and radial curves to floor plans as well as a reducing footprint as you move up through the structure,” he adds.