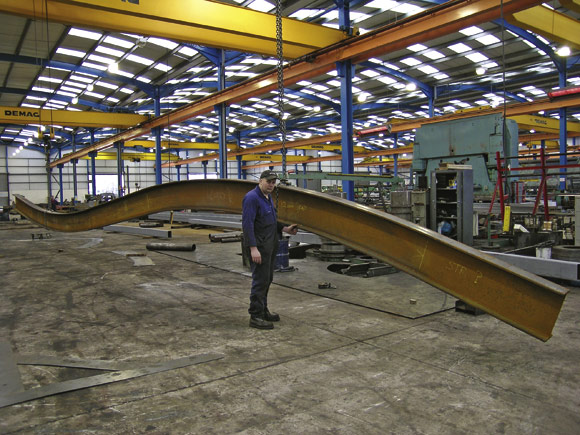 Reverse bends in the same section can be created to reduce the welded joints. A straight section in between the curves is usually needed

Not only is Barnshaws the biggest steel bending company in the world, it can now do the biggest bends thanks to investment in developing new equipment. Architects and engineers can now routinely use curved steel in ways which were not possible 10 years ago, thanks to advances in bending technology.

Investment by companies like Barnshaws means that bends are more economical than ever before – a bend for a rafter might cost only £65. The same investments mean that the highest quality is now routine, with bend tolerances to ± 2mm. Joints and welds are increasingly disappearing as curves become more common. “Curving is often less expensive than cut and weld,” says Managing Director Craig Barnshaw.

“We take on the difficult jobs, for example putting six or seven bends in a single sheet. A lot of fabricators can do the simpler jobs themselves, but none have the capability that we have with our machines. We start where most fabricators have to finish, because we have the tooling. We can bend anything that Corus makes.” For the tightest bends Barnshaws insists on using Corus steel for quality reasons. “Not everything that people source is suitable for bending,” says Barnshaw. “Some imported steel for example is presented as High Grade, but what they do to make it high grade sometimes makes it harder to bend.”

Barnshaws today employs about 200 at its six UK sites and turns over some £12M for a surprisingly large number of customers – 4,000 live accounts at the moment – ranging from Corus through to fabricators of all sizes to manufacturers of mirror frames and napkin rings.  “It is amazing who needs steel to be bent to precise tolerances, but the structural steelwork industry offers us our biggest challenges,” says Barnshaw. 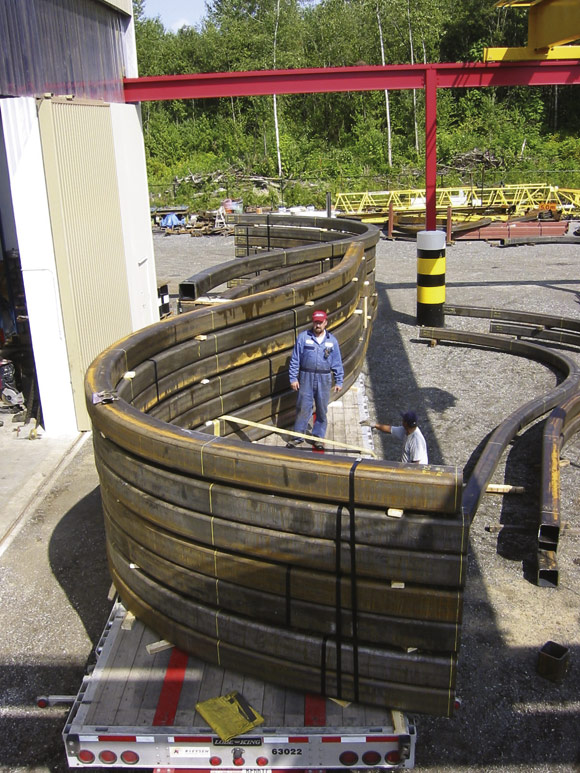 Sections and shapes can be designed on AutoCAD and the drawing e-mailed to Barnshaws for manufacture. Multiple radii can be used as shown in the picture 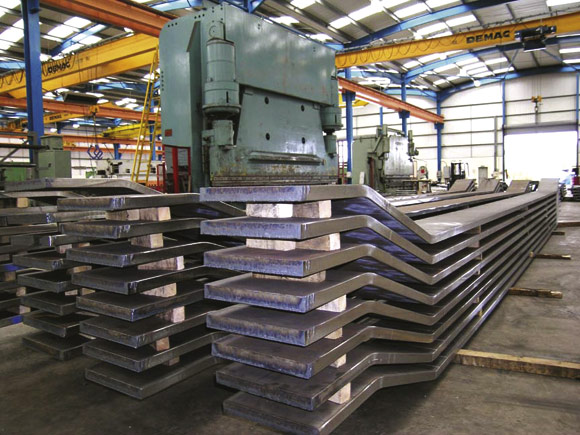 Savings can be made in the fabrication process with the bending and folding of steel plate to eliminate welding. Plate up to 12,000mm long and 100mm thick can be folded. Common applications include flanges for fabricated beams

The turnover from bending has remained relatively static in recent years but the demand from construction has risen as other customers, such as manufacturers of gear casings, have moved production from the UK to Eastern Europe.

The growth in tubes and box section curving for buildings and bridges has been marked: “Ten years ago we saw very little of that, but in recent years this has changed,” says Barnshaw. “Now we can bend tubes in three dimensions or bend on different axes. We can bend sections to a tighter radius than before as well. Before we may have needed a 10mm thick section but now we can bend 5mm thick sections to the same radius, which cuts material costs.”

With price pressures on fabricators, there is an increasing need to reduce the weight of structures. Barnshaws is constantly reducing the radius of sections which can be curved. As a result designers can use lighter sections and reduce the total weight and associated costs like foundations.

Growth is also being seen in the cold rolled market as lighter weight sections are increasingly used in growing markets like off-site. Curved steel usually has high visibility and is seen commonly on new stadiums, a market which continues to expand. Growth is also coming from wherever clients are demanding clear column-free spaces.

Though it is most obvious in high profile structures such as stadiums, the trend to larger spans is apparent in buildings as well. Many designers prefer hollow sections for aesthetic reasons, and as architects become more adventurous in their designs the demand for bending heavier sections increases. This is where Barnshaws’ new bending machine comes into its own. It can bend sections with an elastic modulus of up to 84,000cm³, three times the previous maximum section depth.

“Larger parts of buildings are now being curved, not just the feature parts,” says Barnshaw. “At one time, not many architects designed using curved steel, but the spread of computer aided design and associated software means that being able to do the calculations for curves is now common.”

The pace of change has been rapid recently. Barnshaw says that the Gateshead Millennium Bridge, which has a lot of steel curved by induction bending, might not be done that way now. “Our new method of cold bending sections offers greater flexibility to fabricators.”

The new machine is believed to be the world’s biggest bending machine, costing some £750,000 to develop, and is finding ready applications in growing markets. Installed only in November, by March is was already fully booked until summer.  The machine underwent testing during last year and has already completed two contracts. It is capable of bending tubes up to 60” or 1524mm diameter x 60mm thick. Typical applications will include stadium roof structures and bridges.

Cold bending has the advantage that the section can be pre-painted, and doesn’t have to be heat treated afterwards. “Anyone can bend a section using brute force, but maintaining the section at the same time is much more difficult. We’ve spent a lot of money on achieving that,” says Barnshaws Commercial Manager Greg North.

Previously, the other options for bending large sections were hot bending or induction bending. Hot bending entails heating the section to 1000°C, at which point its strength falls to 5% of its normal yield strength allowing it to be bent easily. But when it cools the yield strength is reduced and heat treatment is needed to get back to the original strength.

The new machine undertook its first job last September when it was used to bend a 457 x 152 x 82kg universal beam to an inside radius of 5534mm, considerably tighter than possible with cold bending previously. It is currently being used on 1000mm diameter, 45mm thick circular hollow sections for Newport Street rail bridge in Bolton, believed to be the world’s biggest cold bend tube to date. This is a parabolic arch designed by Cass Hayward and fabricated by Watson Steel. The tightest part of the bend is 8.4m radius. There is no limit on the length of section that can be accommodated.

Barnshaw concludes: “This capacity cannot be achieved anywhere else. We lead the world in this area of bending.

“But it’s important for clients to know the limitations of what we can bend and the impact it might have on the geometry of what they’re proposing, so they should involve us at an early stage. We’re trying to get it into people’s minds that much more can be done than ever before, and that they shouldn’t design on the basis of what the limitations used to be.”

Guidelines for architects and engineers as to what is technically possible can be found on the Barnshaws website: www.barnshaws.com