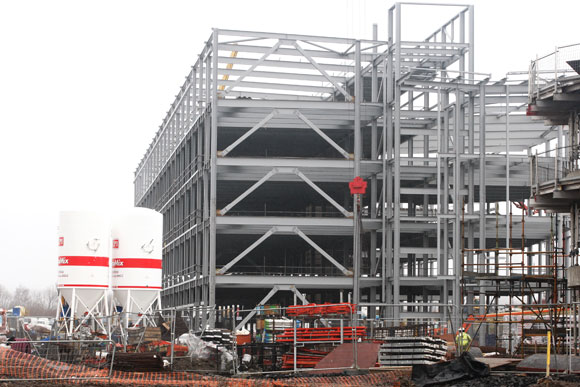 An old steelworks site in Lanarkshire is now one of Europe’s largest regeneration projects. Martin Cooper reports on the first construction job to get under way at the former home of Scottish steel making.

Set in the heart of Scotland’s central belt, Ravenscraig will be the UK’s first new town in more than 50 years. Covering an area of 450 hectares, the overall scheme, at the former steelworks site near Motherwell, is one of the largest regeneration projects in Europe.

This enormous industrial site, which closed down in 1992, has been largely cleared of all buildings and the land remediated and levelled. A number of large construction projects, including a sports centre and residential estates, are now planned which will transform the site and create a new town with over 10,000 inhabitants.

Fittingly, the first major development to get under way is a new, predominantly steel-framed, campus for Motherwell College which is set to open in August 2009 and will replace an existing 40-year old college in Motherwell town centre.

The main focus of the development will be the seven-storey student accommodation block and the adjacent steel framed linear teaching block. Within the teaching block there will be conference facilities, a public learning centre, a training restaurant and bar, performing arts space, job shop, and a plaza which is intended to provide student social space. 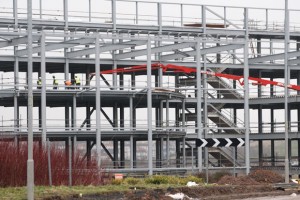 Feature CHS columns in front of the atrium 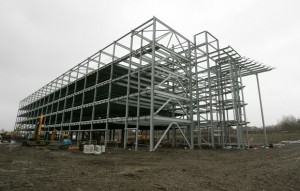 Steelwork for the project will be completed this month 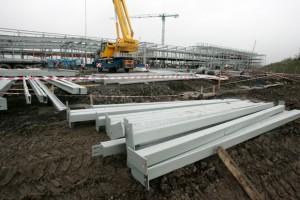 Once groundworks and piling had been completed the site was ready for the steel construction to begin in early November. However, the most noticeable feature of the site is its exposed nature and this has been one of the most challenging aspects of the job to date.

“The site is an extremely large open space and there is no, or little, shelter form the wind,” explains John Downey, Project Manager for Miller Construction. “But despite the inclement weather conditions we are still on schedule.”

Bone Steel will eventually erect 1,500t of steelwork and is scheduled to complete its work this month [April]. The steelwork comprises two large buildings, the superstructure for the teaching block and the adjacent workshop building.

Bone Steel’s fabrication yard is only a few miles down the road in Wishaw, and this has made deliveries and supply of materials to site a lot easier than on many other jobs.

Dave Preston, Bone’s Site Manager, agrees that the weather has played a large part in the construction programme. “The conditions, particularly the wind, has been pretty bad all through the winter. But we’ve still had no problems keeping to the programme schedule.”

Using mobile cranes on site instead of tower cranes for all steel erection has helped keep stoppages due to high winds to a minimum.

Steel erection began with the teaching block, which is rectangular in shape and measures 160m long x 31m wide. The main feature of the building is the covered atrium which runs the length of the structure along the south elevation. Another interesting and noticeable feature is its roof-top step, which takes into account the disparity in floor levels between the front elevation which has five floors and the back (south) elevation’s four floors.

The steel construction for this central and prestigious building includes 20m x 6m bays with the grid pattern generally staying the same all the way up the structure. Stability is provided through braced frames acting with the composite floors.

Architecturally, the main elevation (containing four levels) has a row of feature 406mm diameter CHS columns along the perimeter wall. These large steel members support the roof, and will also support a large glass clad facade behind which will be the large building-high open atrium area.

This feature of the teaching block was one of the main reasons why steel was specified for this part of the project. “Large open areas with feature columns lends itself to steel construction,” comments Struer’s Project Engineer, Neil MacDonald.

“We looked at all options for each individual building on the project and steel was the most suitable for the teaching and workshop areas,” adds Mr MacDonald. The speed with which the teaching block could be erected and the adaptability of steelwork were major considerations.

The other large steel element of the campus site is the workshop block, which includes three distinct, but interlinked, sections. These include a large two-storey 120m long main workshop and classroom area, a 46m x 30m portal framed automotive line structure and a small one-storey plant block.

“The workshop will house some heavy equipment and the upper floor level is supported by some 22m long beams, which weigh 5t each,” explains Mr Preston.

The portal framed area has no internal columns and was erected with 15m long beams spliced together to give the building its 30m spans.

The portal framed automotive area is basically a large workshop which will contain a lot of machinery, and the design for this part of the building is a typical warehouse design with a lightweight roof. “Again, a design which is best suited in steel,” adds Mr MacDonald.

Summing up the project, Pamela Woodburn, Director of Ravenscraig Limited, the overall project coordinator, said: “This is an important milestone in the development of the Ravenscraig site. The establishment of a new college and learning environment is a significant step towards the creation of a new community in Lanarkshire.”