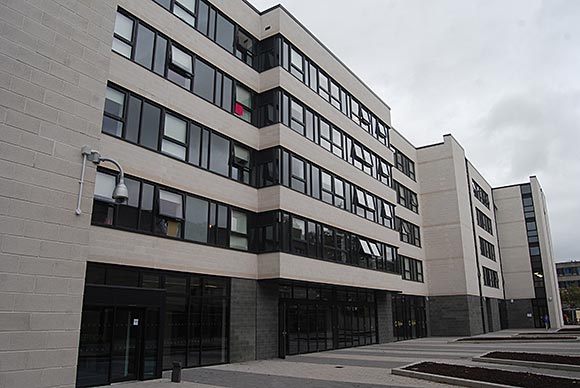 The first building to be completed was Willow Court

An ambitious student accommodation project is under way at the University of Stirling, a scheme that will ultimately provide 788 new bed spaces.

Established by Royal Charter in 1967 the University of Stirling had the distinction of being the first new university in Scotland for nearly 400 years. Since then it has earned a reputation for excellence in arts and science by attracting leading researchers and scholars from around the world.

The campus has been continually evolving and a new masterplan was completed in 2011.The redevelopment of some of its residential accommodation formed an integral part of this plan and highlighted the continuing evolution of the site.

Costing in the region of £38M and funded by the University, the project is due to be completed by 2015. It will replace 40% of the existing accommodation and is being delivered over three separate phases.

The first phase of the construction programme began in 2012 (see box) and was recently completed in time for the start of this year’s autumn term. Main contractor Graham Construction is now well under way with the second phase. 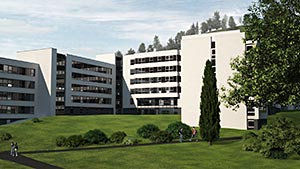 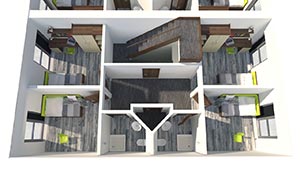 All rooms could be reconfigured in the future

This part of the project began with the demolition of the ageing concrete framed Murray Hall which is being replaced by a new 285 bedroom steel framed residence. This is scheduled for completion in time for the 2014 autumn term.

Walter Watson has been responsible for all of the steel packages and started erecting steel for this phase in late September. It consists of the three, four and five-storey residential blocks, all interlinked and set out in a U-shape configuration.

Built on top of a steep slope adjacent to the campus loch, the open part of the U-shape faces the water, affording many of the flats a scenic view.

The location has also thrown up one of the job’s main challenges, namely access. During the steelwork erection programme Walter Watson quickly began to eat up any available space, except for the central and open sector of the U-shaped footprint.

“It’s very difficult to gain access and bring deliveries to the site as it is surrounded by a steep slope on one side and existing buildings on another,” says David Smith, Graham Construction Site Engineer. “The only practical route in is directly through one of the blocks.”

Walter Watson has left out some floor beams from the middle bay of the central block creating an access tunnel with enough headroom for materials to be delivered into the site.

“We’ve added some temporary bracing to support the area and we will have to return to site to infill the bay later in the construction programme,” explains Trevor Irvine, Walter Watson General Manager, Structural Division.

Woolgar Hunter did the project’s steel design, while Walter Watson designed the frame’s connections. These are generally within the width of the precast slabs as a flat soffit solution offers ease of services integration and a more economical reduced building height.

Each of the three residential blocks in phase two is a braced steel structure with extra stability derived from lift and stair cores. All of the floors, except the ground floor, feature a central corridor with bedrooms on either side.

“Lack of space meant we had to move our crane a few times to get the necessary reach and sequence the erection programme correctly,” sums up Mr Irvine. “Bearing In mind there were only a few spots on the site flat enough to accommodate a 60t capacity crane.”

The choice is steel

“The structural steel option was adopted to provide flexibility both in terms of design development and of procurement, as well as to provide a fast and buildable frame,” says Fiona Harvey, Lewis and Hickey Associate.

She adds the lightweight solution was discounted due to potential restrictions in design and procurement, while concrete was disadvantaged in terms of cost and programme.

Structural flexibility was a key requirement for the client and the University recognised that this framing solution would create buildings that could be adapted to changing student requirements over the potential 60 year lifespan.

“The current residences, including the recently demolished Murray Hall, are load bearing blockwork with precast slabs which has proven to be restrictive to future development,” sums up Ms Harvey. 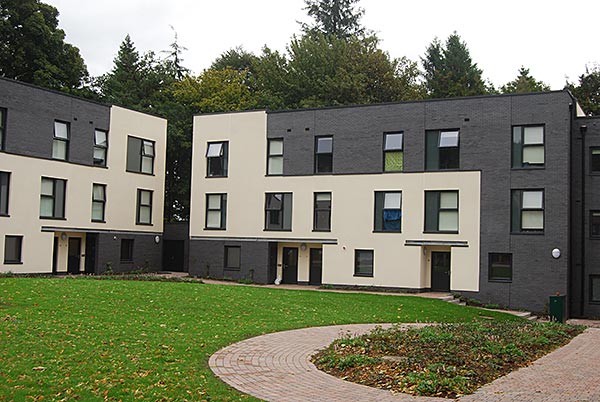 Phase one of the project consists of a cluster of three townhouses known as Alexander Court (above) and a 128 bedroom residential block called Willow Court.

The four-storey Willow Court is a braced steel framed structure based around a regular grid pattern. Three stair and lift cores, at either end of the building and one centrally positioned, provide the structure with stability.

The ground floor of the building contains a launderette, cafe and offices. The upper four levels are all identical and consist of two rows of bedrooms separated by a central corridor. Midway along each floor level there are shared kitchen spaces that cantilever out by 2m from the rest of the structure.

The townhouses, will provide 128 beds within a number of two, three and nine bedroom flats housed in the three-level structures.

They have been formed with a ground floor steel portal that supports a timber frame for the two upper levels.