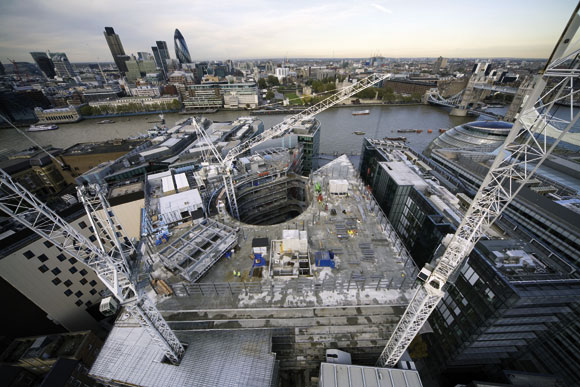 Steel construction has played an integral role in the development of More London on the capital’s south bank. Martin Cooper reports from Plot 7, the last structure of the scheme to be completed.

One of the capital’s largest mixed use developments is nearing completion. Stretching along the south bank of the River Thames from Tower Bridge to London Bridge, the More London scheme occupies a 13 acre site and is home to the Greater London Authority as well as a host of prestigious and high profile companies.

More London Plot 7 represents the last building to be completed in a masterplan that commenced in 1999. Designed by Foster and Partners, Plot 7 has achieved an ‘Excellent’ BREEAM rating, and will be the first commercial building in London with bio diesel combined cooling, heating and power plant.

Offering more than 60,000m² of office space, the building will be the new London headquarters of Price Waterhouse Coopers. The building is predominantly 10-storeys high, although due to planning restrictions to keep sightlines of St Paul’s clear, the southern elevation facing Tooley Street has seven floors. The site’s footprint also includes a listed Victorian fire station, which is currently being used as site offices and will be refurbished as part of the overall scheme. Keeping the southern elevation to seven floors, adjacent to the fire station, also ensures the old structure is not overshadowed. 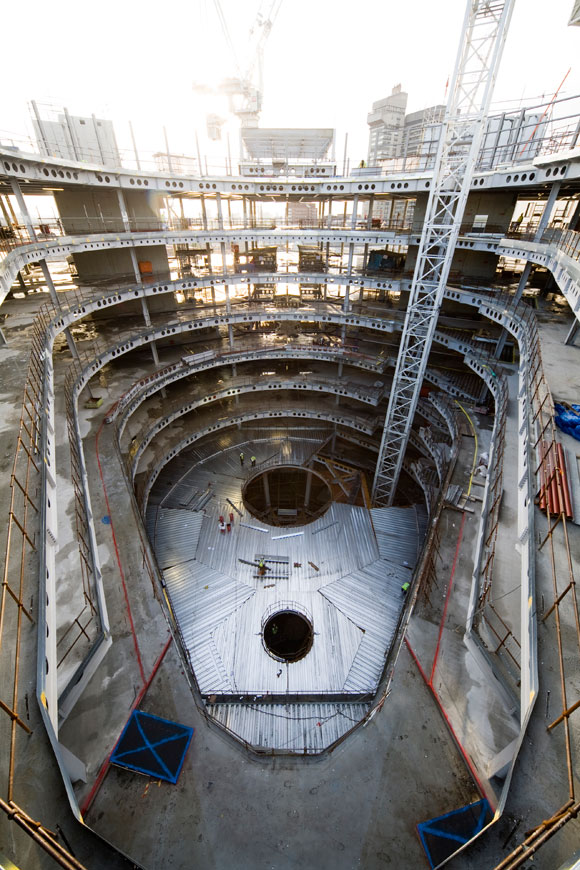 The atrium will feature a glazed rooflight at level three 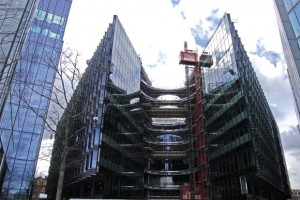 The atrium will feature a glazed rooflight at level three

Externally Plot 7 will feature a combination of aluminium curtain walling and glazing, in keeping with the gleaming façades of the surrounding buildings. Internally the block is a shell and core development with four concrete cores and a steel frame requiring some 5,200t of structural steelwork.

There are more big numbers associated with the project, such as 132,000 bolts have been used, 75,000m² of intumescent paint has been applied to the steelwork – the majority of which was done pre-erection at Severfield-Reeve’s North Yorkshire yard – and more than 4,000t of Fabsec cellular beams have been erected.

These beams, with their regimented series of holes, are one of the most prominent features of the uncompleted project. They have been used on all floors to accommodate services within the structural void and for the long 18m internal spans.

Plot 7 is roughly square in plan, with a large atrium cut out of the middle and then open to the north elevation facing the Thames. The opening into the atrium means that  the building’s northern and eastern elevations end with pointed fins. The atrium itself offers a large open internal space, containing a podium at level 1, while a glazed skylight covers the atrium at level 3. Above this there are footbridges linking levels 5 and 8 across the atrium, and these structures complete the circular shape of the upper atrium.

Supporting the atrium’s glazed skylight are a series of large raking columns which start at ground level. Two 20t 18m long beams are connected to the raking columns and then support the glazed roof along with secondary steelwork.

The four raking columns each fan out into V-sections, meaning the glazed atrium roof has eight supporting steel members. The horizontal loads from these large columns are transferred into the ground floor slab, while vertical loads are carried further down to the basement slab as the rakers are supported on below-ground vertical steel columns.

“Steelwork was erected to the full height of the building before we infilled the atrium,” explains Steve Swift, Project Manager for Severfield-Reeve. The site had four tower cranes during the peak erection process last year, and Severfield’s erection company Steelcraft used the atrium area for access during the construction process. “The atrium provided an ideal area for the erectors to get at the internal areas of the project and we also used it as a lay down zone for in-coming steel.”

From Tooley Street a service tunnel provides access to all of More London’s buildings and steel deliveries went via this tunnel to be deposited in the atrium area. This subterranean road was already in place when construction work began on Plot 7, and as it runs beneath part of the new building’s footprint it influenced the design of the steelwork frame.

The perimeter line of columns on the structure’s western elevation sit directly above the tunnel. Erecting steelwork inside the service tunnel was obviously not an option, so Severfield-Reeve and Arup came up with an ingenious solution involving temporary transfer structures, to allow the column line to remain intact. 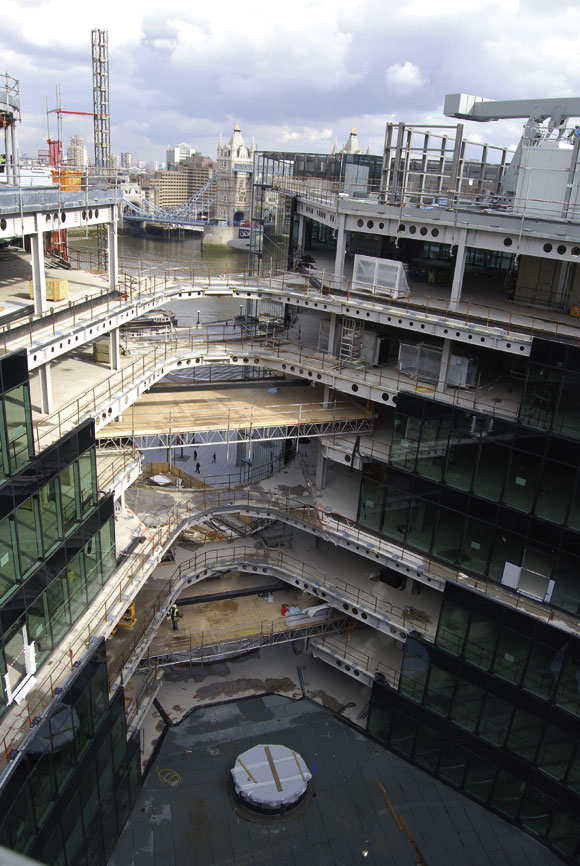 4,000t of cellular beams have been used on all floors 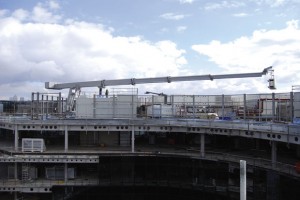 A rooftop 50t jib crane, with a 35m reach, has been installed for window cleaning

“The position of two columns would have meant they would have gone straight through the tunnel,” explains Mr Swift. “When we erected these two steel members we founded them on ground level, instead of basement level and erected a temporary transfer structure, consisting of diagonal 600 x 600 Fabsec sections placed between the adjacent columns. This then supported the columns while the frame was going up.”

Once the western elevation steelwork was topped out, two similar permanent transfer structures were erected on the roof. A jacking operation then allowed the loads to be transfered from bottom to top, turning the columns effectively into hangars. Once the jacking process was complete the large temporary diagonals on the ground level were then removed.

“This procedure meant the tunnel was closed for a minimal amount of time,” says Jonathan Portlock, Arup Engineer. “The column grid pattern was able to remain constant while the internal 18m long spans meant the next column line was outside of the tunnel’s footprint.”

The western and eastern elevations of Plot 7 feature an eye-catching sawtooth cantilever with four recesses per 9m bay. This skewed cantilever presented a number of unique challenges to the design team as the deflection limits on these elevations were quite onerous.

Severfield installed the sawtooth cantilevers in prefabricated sections, each one 9m long and one storey high. This not only speeded up the erection process, as the units arrived fully assembled and only had to be bolted into place, but being manufactured off-site they helped with the overall rigidity of the cantilevers.

With four large glazed elevations as well as internal glazing around the atrium and recess, keeping the windows clean will be a full time job. No hanging baskets for the window contractors here, Foster and Partners design for Plot 7 includes a rooftop jib crane with a 35m reach, when fully extended. This large piece of equipment – the biggest of its kind in the UK – can reach all of the atrium’s glazing as well as the majority of the external elevations.

“The jib crane weighs approximately 50t and so it had a direct influence on the steelwork design,” explains Mr Portlock. “Such a large piece of equipment sitting permanently on the roof has a direct bearing on the upper levels of steelwork.”

Larger 800mm deep sections – instead of 670mm deep used elsewhere – have been installed on the uppermost level of Plot 7 to accommodate the extra weight generated by the crane.

Severfield began its steelwork erection in February 2008 and completed the task in a 10 month programme. The fit-out of Plot 7 has already reached an advanced stage and completion of More London’s newest and last flagship structure will be this August. 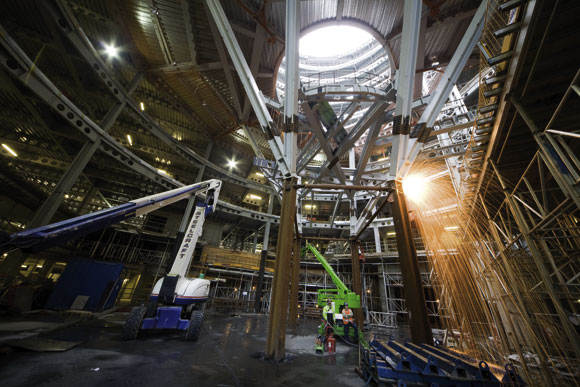