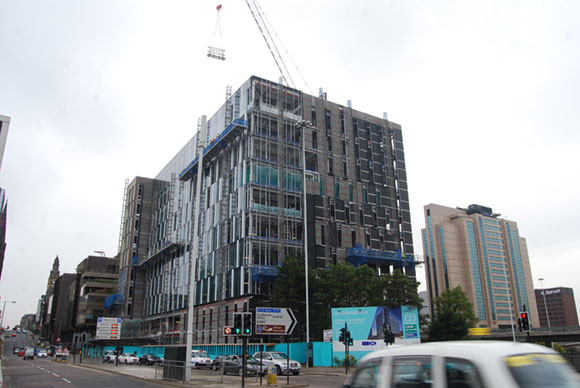 The latest landmark speculative commercial development in Glasgow has utilised structural steelwork for it ease and speed of construction. Martin Cooper reports.

A number of high profile schemes are currently under way in Scotland’s largest city including St Vincent Plaza – a striking and efficient building that will provide 15,700m² of Grade A office space spread over 11 floors.

The project’s flexibility and future proofing has been further enhanced with the addition of enlarged risers that will allow tenants to add additional cabling and ducting. 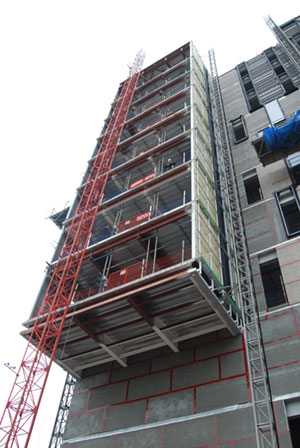 One of the building’s two feature cantilevers 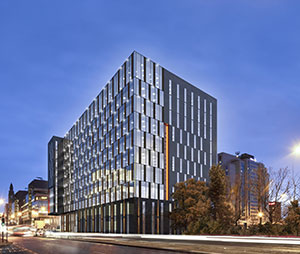 A new modern and flexible office development for Glasgow 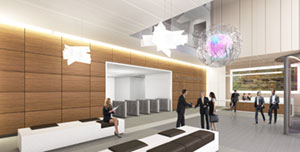 The building will feature a large double height entrance lobby

Main contractor Bowmer & Kirkland started work onsite during October 2013 on a plot that was formerly a car park for an adjacent bank. The company’s work commenced with the construction of a nearby replacement car park for the bank’s employees. Once this was complete enabling and piling work could begin on the site.

A series of 25m deep piles support a split-level stepped suspended slab that takes into account the sloping site. Consequently the southern elevation includes a lower ground level, while at the northern side (main entrance level) the lowest level is ground floor.

The building’s steel frame springs off of pile caps and is set out on a regular grid of 9m × 11m. Fabricated cellular beams, with service holes, have been used on every floor for easy M&E integration.

According to the construction team all framing options for this project were evaluated during the early stages of the design process.

“This is a speculative office development and getting the completed building onto the market as quickly as possible was very important to the client. So a fast track construction programme was essential and steel was the best option for this,” says Richard MacDonald, Keppie Design Architect.

The steel framed building was then designed around a number of site constraints, namely the adjacent M8 motorway and its connecting flyover, and a 22m no build zone separating the site from its next-door neighbour.

The proximity of the M8 meant a number of rock anchors, installed during the motorway’s construction, protruded into the St Vincent Plaza site. This meant some of the structure’s piles and columns had to be designed and installed so as not to clash with these subterranean obstructions.

As the site is bounded by roads along three sides laydown areas for materials are at a premium in and around the project. Steelwork was generally brought to site and erected immediately, leaving other areas of the site clear for other trades to work in. If the project team had gone down a different framing route, the site may have been much more congested with plant and materials, making the logistics far more testing.

“When the steel erection programme initially started we were still piling one part of the site, so coordination between trades has always been a key challenge on this job,” explains Paul Wilson, Bowmer & Kirkland Senior Project Manager.

The structure’s steel frame gains all of its stability from diagonal bracing, most of which is located within the building’s centrally located core. However, some bracing was needed in other locations to afford additional stiffness and this proved to be a challenge.

Eddie Gray, Struer Director says: “Where to put the extra bracing was difficult, as there are no internal partitions to use and we obviously had to avoid window openings and so any blank panels on the exterior at the lower levels generally conceal diagonal bracing.”

More bracing is also located within the building’s most visual elements, two cantilevers positioned on the north and south elevations. Both are one bay wide (9m), with the southern element cantilevering by 4.5m and the northern by 6m.

“As well as breaking up the main façades, the north cantilever projects presence along St Vincent while the south cantilever addresses the views into the city centre from the M8,” explains MacDonald.

In order to accommodate a 1.5m step-in at ground and first floor levels a girder and truss arrangement was provided over the second and third floors to support the seven floors above and the 6m cantilever. The structural arrangement incorporated two 21m long plate girders each weighing 14t.

From the fourth level upwards, more traditional rolled sections are used for the cantilever. To minimise deflection of the 6m cantilever structure, diagonal struts were installed to provide stiffness.

Steelwork contractor BHC had to bring in a 100t capacity mobile crane to lift in the cantilevering girders, with the rest of the steel frame being mostly erected via the site’s tower crane.

Its contract also included the installation of metal decking and precast stairs, as well as erecting 60t of cold rolled steelwork for the rooftop plant enclosures.

Steelwork erection, which involved more than 3,300 individual pieces, was finished last June, and the overall project is scheduled to be completed by mid-2015.