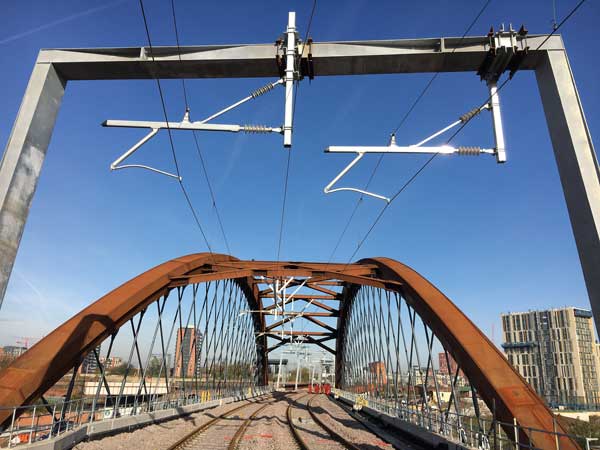 The Ordsall Chord, a new railway line connecting Manchester’s Piccadilly, Victoria and Oxford Road stations for the first time, has received the Royal Academy of Engineering’s Major Project Award for 2018.

The award was in recognition of the collaboration, skill and engineering flair necessary to deliver such a complex, multidisciplinary feat of railway engineering.

An integral part of the Great North Rail Project, the Ordsall Chord incorporates the first asymmetric network arch bridge in the world. Completed in December 2017, the Chord uses only 540m of entirely new track to connect Manchester’s existing railway lines via a brand-new viaduct spanning the River Irwell.

By creating a link between Manchester city centre’s main railway stations, as well as enabling new, direct services to Manchester Airport from the North, the Chord allows more trains to run on the network and reduce journey times into and through Manchester.

With collaboration at the heart of the Chord’s engineering success, the team members that received the award represent the multidisciplinary partnership undertaken between Network Rail, Skanska BAM, Siemens, Amey, steelwork contractor Severfield, the designers, AECOM Mott MacDonald, WSP and Balfour Beatty to build the Chord.