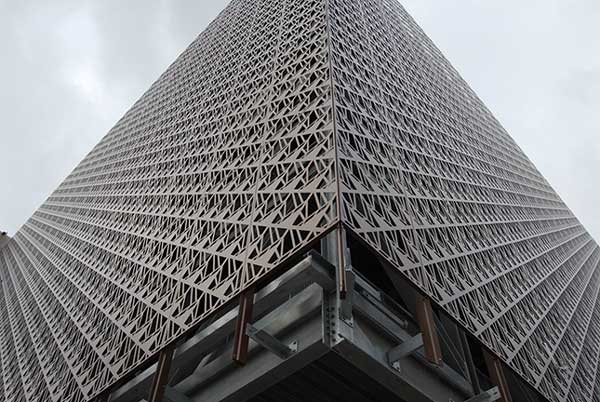 The steel-framed structure is based around a standardised column grid pattern of 7.5m along its perimeter, with one line of internal columns giving the car park two spans of 16m-long. The steel beams support metal decking and a 160mm-thick concrete topping to form the composite floors.

The damaged, and consequently unusable, car park left a large hole in the city’s car parking availability and Liverpool City Council wanted a replacement to be built as quickly as possible as the car park will not only serve the nearby Liverpool Arena and the waterfront, but also the wider city centre.

The design team decided that steelwork offered the fastest programme for the project.

LeachRhodesWalker Architects Managing Director Christian Gilham said: “This is an engineering structure and so it was important to have the steelwork as a feature, which can be glimpsed through punched holes in the aluminium cladding.