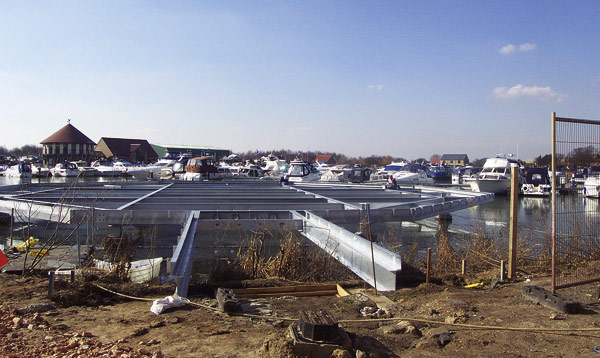 Spalding based D.A Green is supplying and erecting 30t of steelwork for the construction of a ‘floating’ restaurant at the Burton Waters marina, on the outskirts of Lincoln.

D.A. Green Contract Manager Sean Clark said the restaurant is being built on a number of existing pile caps adjacent to the riverfront which will give the impression the structure is floating.

“The piles were originally installed a number of years ago for a job which was cancelled,” Mr Clark said. “After a thorough survey of the piles we were satisfied they could support the new structure.”

D.A Green has erected a steel base with 460mm deep beams to form an octagonally shaped grid which has a 25m diameter at its widest point. This has been covered with metal decking to support a concrete slab. Eight steel columns were also erected to support the steel clad roof.

Main contractor is Linpave, and it is scheduled to complete the restaurant by late Summer.