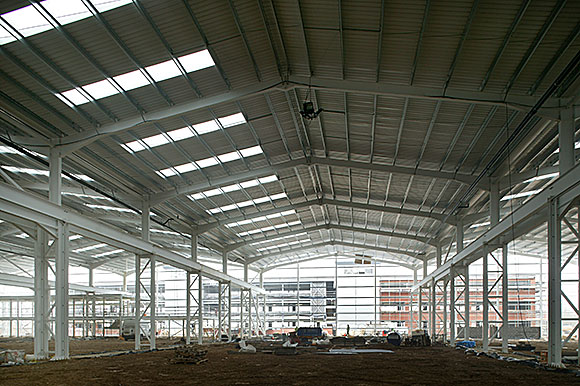 Steel construction is playing a pivotal role in the development of a large new business park on the outskirts of Lincoln, providing a major boost to the local economy.

A landmark development, known as Teal Park, is rapidly taking shape on the outskirts of Lincoln. With the potential to attract millions of pounds of business and create thousands of new jobs, the park is set to give a major boost to the local economy.

One of the initial phases of the scheme is a new office and workshop facility for Siemens. The engineering company is one of the largest employers in Lincoln and it is relocating its industrial gas turbine business from existing premises in the city centre.

Commenting on the move, Neil Corner, Siemens Director of Service at Lincoln, says it will bring major benefits to the business. “The new facility will allow us to bring together the majority of our service operations in Lincoln on to one site.” 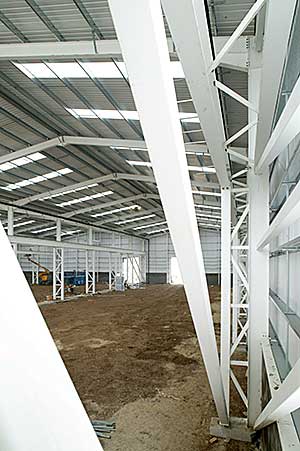 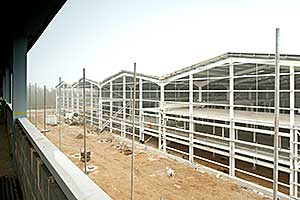 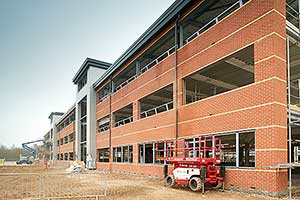 Siemens’ move is viewed as an endorsement for the business park and may even encourage others to consider moving here. Teal Park is currently undergoing some major infrastructure works, with a new access road being built and the nearby A46 being widened, projects which will greatly improve transportation links to the site.

The new Siemens facility consists of a three level 4,500m² office building, adjacent to a 7,300m² service workshop. Both are structurally independent steel framed buildings, erected by Hambleton Steel during a nine week programme which completed in March.

Construction work on this previously greenfield plot began last October with main contractor Bowmer & Kirkland initially undertaking some earthworks, and then installing piling mats in readiness for the steelwork erection.

“There will be some heavy loadings exerted in the workshop from the large turbines, so the ground was also stabilised,” says Scott Millington, Bowmer & Kirkland Project Manager.

Steelwork erection began with the office block as this structure requires a longer fit-out programme. Once Hambleton had completed the office structure and the metal decking had been installed by SMD, the follow-on trades were able to begin while steel erection moved onto the workshop building.

The three level office building is approximately 100m long by 15m wide, and split into three zones by its two braced cores that are positioned next to the two entrance areas. Steelwork is based around a regimented 7.5m x 6m grid pattern, which will give the offices an open plan feel as there is only one internal column line.

Structural steelwork was chosen for this project for a number of reasons, such as the spans required in the workshop and the economy of construction.

“Steelwork for the office block was completed in just five weeks,” adds Mr Millington. “Speed of construction was an important consideration for this job.”

The 30m high workshop is positioned to the rear of the office block and has a footprint of approximately 100m × 100m. Structurally it is a battened portal frame with four 23m wide spans, each of which will accommodate overhead gantry cranes.

Within the workshop building there is also an integrated two-storey office block, overlooking the main service area. Outside and adjacent to the workshop’s service yard there is a steel framed refuse hall structure.

However, it is the workshop’s main function of servicing turbines that has made the biggest impact on the steelwork design. Overhead cranes are a vital part of the servicing procedure and these units will run on rails attached to the tops of steel beams which are supported by the structure’s main columns. The resultant extra loadings the cranes will place on the steelwork frame has meant the installed columns are bigger than they would otherwise be.

Supporting the crane beams are a series of 7.5m high welded double lattice columns, spaced at 9m centres and brought to site as fully assembled members. Above the crane beam the column arrangement reduces to a single member which extends upwards to support the roof. In order to limit deflections each of the lattice column’s base plates includes a moment connection.

After the steelwork erection had been completed on the workshop and the cladding and roof installed, Hambleton had to return to site to realign the crane beam supporting columns.

“The cladding may have resulted in some dead loads on the frame which could have caused some minor movement, which in turn would interfere with the crane’s operation,” explains Mike Dixon, Hambleton Steel Contracts Manager.

A sliding connection plate had been inserted between the double columns and the crane beam, and as some extremely tight tolerances were required before the gantry cranes could be installed, these plates allowed Hambleton to slightly realign each connection where necessary.

The Siemens facility is aiming to achieve a BREAAM ‘Excellent’ rating and is scheduled to be completed in July.