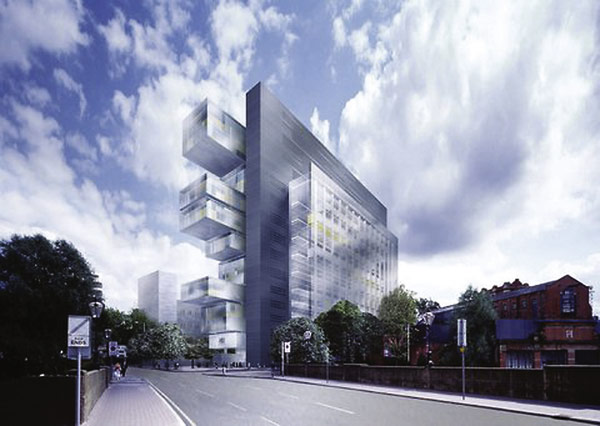 The building will be the new headquarters for the Department of Constitutional Affairs in the North-West of England and will include around 50 courtrooms. It is the biggest court complex to be built in the UK since the Royal Courts of Justice in London.

Mark Thompson, Structural Team Leader with engineering designer Connell Mott MacDonald (CMM), says there are huge complexities in the design and construction of the glazed cantilevers. These are fully welded truss frames, made up of universal column sections and fabricated I-beam sections, that extend by up to 15m.

Each cantilever carries a complex combination of compression and tension, says Mr Thompson. Resulting out of balance forces are carried by two of the concrete cores, while a single core in the middle of the 16-storey structure provides the main lateral stability.

For health and safety reasons the cantilevers, currently partly installed, are constructed off-site and brought to the project as partly assembled units.

CMM carried out 3D structural modelling and analysis using Staad software, in which particular attention was given to the assessment of floor vibration. Given the big open floor spans, unusual for a core building, analysis included the effect of large numbers of people walking around.

For this, CMM brought in bridge designers to help assess the dynamic response and included a damping beam to reduce the natural vibration frequency of the floor.

A number of unusual voids and openings needed because the building is designed to be naturally ventilated and to maximise use of natural daylight added  to the complex distribution of forces.

A dramatic feature is the use of slender triangular columns within an 11-storey atrium, with a 60m by 60m glass facade along the building’s western edge. The building is due for completion in 2006.