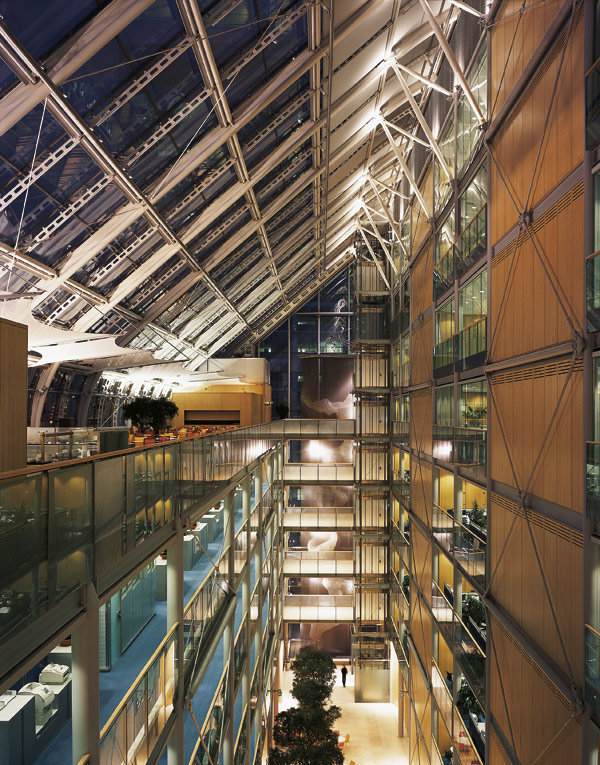 Architect: Hopkins Architects
Structural Engineers: WSP Cantor Seinuk
Steelwork Contractor: William Hare
Construction Manager: Mace
Client: The Wellcome Trust
The Gibbs building stands next to the Wellcome Trust’s old headquarters on London’s Euston Road. The 28,000m² glass and steel building is arranged in two internal blocks. The north one, facing Euston Road, rises to 10 storeys; the rear, to be in scale with the surrounding streets, to five. Both are covered by a sweeping glass canopy and linked by a dramatic, full height internal ‘street’.

Andy Barnett, Director in charge of the project for Hopkins Architects, says: “A key part of the design process was to encourage Wellcome’s staff to work in teams, having come from a variety of separate buildings which were arranged as cellular offices and corridors. We’ve created open plan areas with a variety of glazed meeting rooms and break-out areas to create a flexible environment.”

In typical Hopkins style, the steel structure is expressed both internally and externally. The structural engineer, steelwork contractor and fire engineer all had a role in making this work effectively and enhancing the appearance of the structure.

Andrew Woodward, Technical Director of structural engineer WSP Cantor Seinuk, says: “We went into a lot more detail at tender stage about such things as connections, details that would normally be developed after appointing the steelwork contractor, to demonstrate the level of quality we were looking for. We spoke to steelwork contractors while working on this to get advice and to make sure they were practical.” 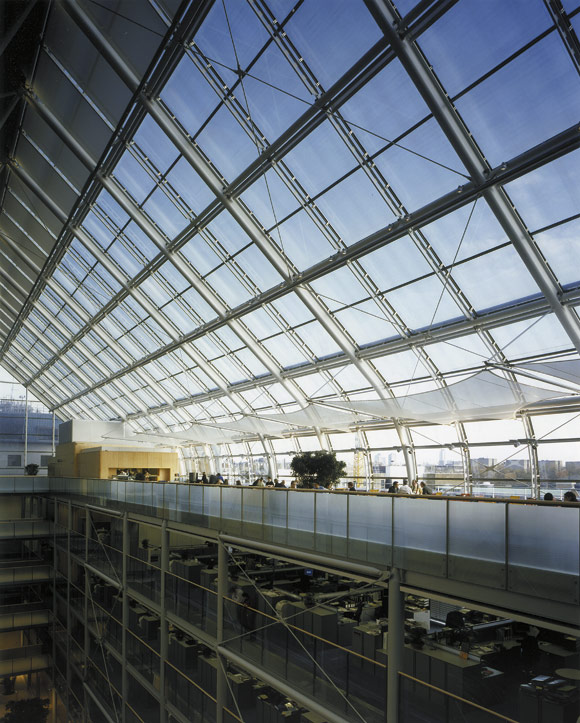 By virtue of its height the building would normally require 120 minutes fire resistance. Following a fire engineering study by Arup Fire the rating of the key structural members was reduced to 60 minutes. Floor edge beams had their rating reduced to 30 minutes based on test evidence which showed they would not get as hot in a real fire as theory predicted.

This allowed a single coating of intumescent paint to be used: “The paint would otherwise have been so thick that definition of the exposed bolted connections would have been lost,” says Mr Woodward.

The building’s office space is divided vertically into five bays, separated by two stair cores towards each and, and by two bays containing a series of double-height “mini-atria”. These provide flexible spaces for meetings and to encourage interaction by the teams on the adjacent floors.

The mini-atria are created by leaving out a section of floor on alternate storeys and framed with a standard beam arrangement so that voids can be filled in or created in the future. The floors of the north block are of composite construction with lightweight concrete floor slabs.

Columns are circular hollow sections filled with concrete and designed compositely. They are joined at alternated floors using site-welded machined bosses. The connection was designed to allow the columns to be bolted together temporarily so that construction of the steel frame could continue independently, allowing the final welding and making good to be done later, off the critical path.

High strength tie rods over a double storey height are used to provide stability in the east-west direction. Steel link bridges connect the north and south blocks and provide the landings for the lifts. They are formed from stiffened steel plates supporting concrete slabs, on fabricated T-section primary and secondary beams and suspended from Macalloy tie rods.

The judges said: “The building has achieved a simple, clear design that is logical and sensitive in its master-planning, sophisticated in its detailing and uncompromising in its execution. The result is a classic of its type.”