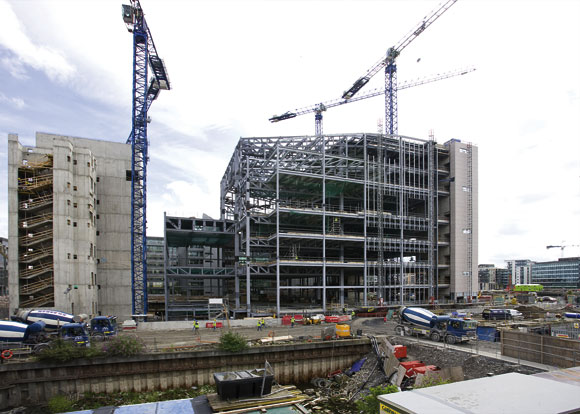 Structural stability for the NCC is derived from two cores, sway frames and braced frames

Ireland has some ambitious plans to tap into the burgeoning and globally lucrative business tourism market. Under its National Development Plan more than £240M will be invested in upgrading and modernising the country’s tourism facilities in the coming decades. A pivotal element of this grand plan is the National Conference Centre (NCC), a flagship project which will open the door for Ireland to this massive market.

Conferences provide a valuable economic spin-off with delegates often prolonging their visits to tour around the country. Ireland’s Department of Arts, Sport and Tourism, says business tourists are high yielding visitors who tend to spend around 70% more than regular holidaymakers. It is encouraging that already the NCC is taking bookings for major conferences to be held in 2010. As a building itself, the futuristic design and its location in an area of Dublin that is transformed means that it will become an iconic structure for the city and a major civic facility.

The building is not just iconic, it is also an incredibly complex and challenging structure and one the entire design team are proud of. Located in Dublin’s Docklands area and overlooking the River Liffey, the NCC consists of two levels of basement car parking with a 45m x 60m exhibition hall at ground level, a 35m x 47m exhibition hall at first floor level with an auditorium stacked on top with public access from three separate levels. 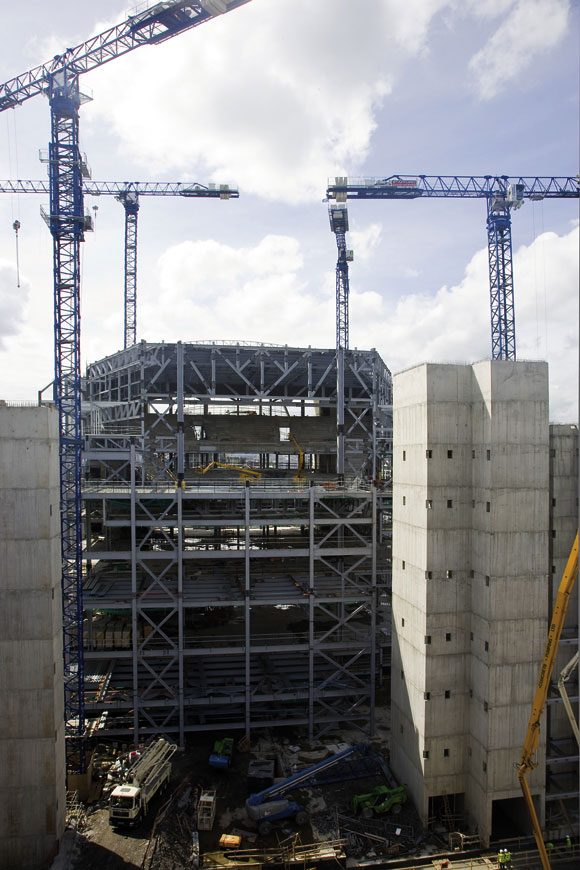 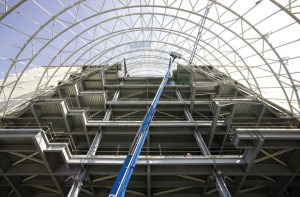 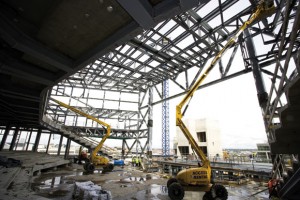 Designing and constructing a building with three large open areas, all on top of one another, required considerable interaction between the team members. The complex structural steel design model designed by O’Connor Sutton Cronin took nine months to develop. From this model the project was priced by Fisher Engineering. Following this, further development of the model (a joint effort between O’Connor Cronin Sutton and Fisher Engineering) took a further period of nine months.

Historically the project has been on the radar for some time and architect for the job, Kevin Roche of Kevin Roche John Dinkeloo & Associates, was first appointed as far back as 1997. Substructure works started on site in November 2006, with formal contract documents being signed in April 2007.

The site mainly consisted of former railway sidings and warehouses which once served the adjacent port. Initial work on this brownfield site involved clearing the ground and demolishing existing buildings. The site was then excavated to a depth of 7.5m, and piled, with the two southern concrete cores then constructed in readiness for steelwork erection which started in late 2007.

Steel erection began on the south side of the site and has since progressed, in six phases, steadily northwards away from the two southern cores. “The structural stability is derived from the two southern cores, steel sway frame action of the two main frames and also braced frames. The cores needed to be constructed before steelwork erection began,” explains Ken Moriarty, Technical Director of O’Connor Sutton Cronin. “These cores also contain the main stairwells which provide important access during construction.”

Steel begins at basement level, with two levels of car parking based around a standard 7.5m grid pattern. Above this, at ground level and upwards the structure takes on its highly architecturally driven and challenging form.

“At ground floor level we have an exhibition hall with a capacity for 3,000 delegates, then at first floor there is another 2,000 capacity expo hall and finally at second floor level there is a 2,000 seat auditorium,” says Mr Moriarty.

“These three large functioning levels need to be open plan with a minimum number of columns. This has led to heavily engineered trusses, with a maximum depth of 2.3m, being used to span the large open spaces“.

To overcome these challenges the structure’s steelwork is based around eight internal 800mm x 800mm fabricated plate columns. These columns have a maximum load of 40,000kN, four of which extend up through the two expo halls and top out at the roof level of the auditorium.

“The internal columns are arranged in two rows of four, and this is a key point as they then don’t interfere with sightlines and there is a clear view into each expo hall from their respective entrances,” adds Mr Moriarty.

These primary columns were brought to site in lengths of 15m, each weighing over 20t. “Logistics are extremely important on this site as it’s very restricted, being surrounded by a canal, busy roads, and an existing office building as well as a light rail tram system (LUAS) currently under construction,” says Donal O’Gorman, CMP’s Structural Steel Manager/Senior Project Planner.

As steelwork progresses the site is also getting tighter with less material lay down space. “That’s why construction logistics and site planning is key to the success of the steel frame erection,” says Mr O’Gorman.

The expo hall on the first floor also incorporates a stage area and to allow a column free area four large 22m long x 3.5m deep x 48t Vierendeel trusses have been erected on the level above to support the stage area.

“These trusses were brought to site in two sections, then bolted together and lifted into position as one piece using a 350t mobile crane,” explains Adrian McCoy, Projects Director for steelwork contractor Fisher Engineering. 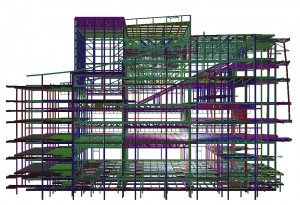 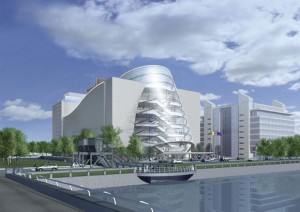 “Once we got to the second floor level, using a mobile crane wasn’t practical for the general steelwork,” says Mr McCoy. “The height and radius would’ve required a huge crane and space on the ground is at a premium.”

“The upper auditorium terrace seating is formed using a series of frames which are positioned at 2.5m centres on a radius around the auditorium, each of which have long cantilevers. A number of the columns supporting these frames are transferred out at the second floor using trusses which also form the roof of the upper expo hall.” says Mr Moriarty. ”This auditorium also accommodates two sway frames which provide the structure with additional lateral stability.”

Part forming the roof over the auditorium is the project’s largest single steel element; a 160t 48m long roof truss. With plate girders forming its top and bottom cords, the 6.5m deep truss was lifted into position in 24 individual pieces. It required temporary towers to support it until the entire truss was bolted into position with its connecting steel members and secondary trusses. Once the roof steelwork was erected the auditorium’s precast seating was then installed.

“The integration of services into the main structural frame also played a big role in the overall steelwork co-ordination/fabrication drawing process,” explains Mr O’Gorman. “The whole building is highly serviced and the already heavily engineered frame needed to be adapted to accommodate services whilst maintaining its architectural constraints.”

Aside from the challenging steelwork, the NCC will have stone cladding on three elevations, with the front or main entrance elevation incorporating an eye-catching 37m span Werner tubular steel glass drum, which will act as a beacon directing visitors towards the building.

“The floor to ceiling heights are so high on the upper levels, the perimeter steelwork incorporates secondary 400mm x 200mm and 350mm x 350mm box sections to accept the rail system for the stone cladding,” sums up Mr McCoy.

Once the visually stunning building is complete in 2010, main client Spencer Dock Development Company, under a public private partnership, will operate and maintain the NCC for a period of 25 years, after which the facility will revert to the State.