Four into one will go 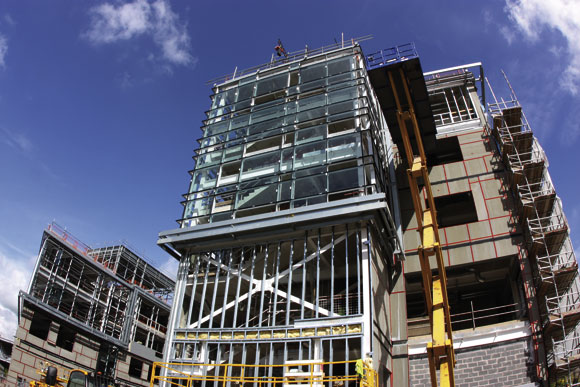 The new campus will bring a university into Burnley

A new campus for Burnley College will replace four existing sites and bring a university into the town as a centre of the University of Central Lancashire.

Student power came to the fore during the initial planning stages for a new college campus in the Lancashire town of Burnley. A 6,500 signature student petition is credited with playing a key role in gaining local authority, educational department and North West Development Agency support for this ambitious project.

The new campus, encompassing a further and higher education college, sports hall and sports fields, will replace the current four site system – currently dotted around the town – and bring them together under one roof.

One of the main clients is the University of Central Lancashire and it will use one of the campus’ buildings, bringing a university to Burnley.

The new 25,600m² structure is comprised of seven separate, but interconnected blocks with the five main buildings rising to five levels, plus plant rooms. Two blocks, G and F have one and two levels respectively, being designed to step down at the front of the college towards the Calder River that dissects the site. 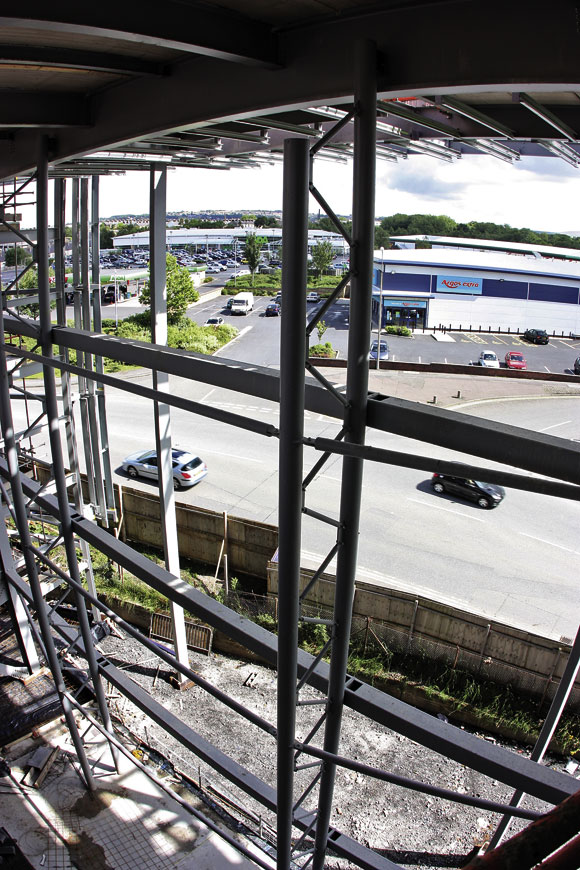 Supporting columns of the atrium

One of the most interesting elements of the scheme is a 16.5m high atrium, providing natural lighting, and forming and integral part of the sustainability of the building.

“The atrium, with its 18.2m wide glass screen, forms the main hub and central focus of the college. New students arriving in September next year will be welcomed in the reception with a top class cafe on the ground floor,” points out Conder’s Managing Director Jason Hensman.

From the vertical 219 x 5 CHS tubular columns, Conder formed a lattice of 60.3 x 3 CHS tubes to a second vertical tubular column set back by 1m from the glass screen. These provide added support for the 195m² screen which hangs from a 21m long, 1,016 x 305 x 487 beam, linking blocks B and C at level five to the main block A.

Stairs in block A form a vital load bearing element, with spliced columns of 356 x 406 x 287 from ground floor to level five, working in conjunction with the 1,016 main beam.

Lee Brooks, Structural Engineer for White Young Green, says the atrium forms the spine of the project providing access to the other blocks, but also presented a structural challenge as it has to incorporate the site’s slope. “As well as its complex shape, some of the blocks step down from the atrium to lower levels.”

Inside the atrium there are also a number of column free zones which required deep transfer structures.”

Once complete, the college will provide training in construction and manufacturing with both on and off the job training. The ground floor in blocks E and G – covering an area of 3,500m² – will contain teaching and practical rooms devoted to construction, with facilities for electricians, plumbers, bricklayers, carpentry as well as painting and decorating 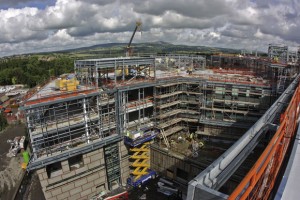 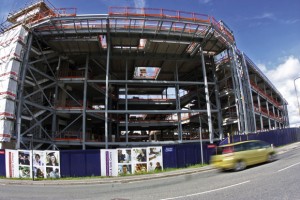 A feature element of the project is the 16.5m high atrium, which provides access to all other buildings

The featured cut outs required Conder to introduce modified fixings for the soffit steelwork, using incoming beams to create the roof structure voids that will be completed by the cladding contractor.

From the rear of the atrium, an internal 150m long thoroughfare – known as the ‘Street’ – links the main building, via new pedestrian and road bridges to the sports area. Set behind the main building, a new 1,212m² single storey, multi sports facility and external games court as well as an all weather football pitch, will complete the new facilities.

Level two in block C will house the college’s IT centre, housed in six adjoining classrooms; with other IT facilities also located on the same level in blocks D and F. There are learning resource centres throughout the college in separate blocks, on different levels, with a business centre on level one block D.

“The project has added complexity with the special connections required in five of the seven blocks. A secondary cold rolled steel package was required to facilitate cladding detail around the exterior of the structure,” comments Mr Hensman.

The skewed ends of the structure in blocks B and D called for individual solutions. On block D, Conder designed and manufactured individual secondary steelwork, for the projecting feature dark grey, insulated, metal wall coping, with galvanised railings above.

The individual blocks will be clad in a combination of zinc grey coated plank profile metal rainscreen with smooth grey cladding to walls, column casings and entrance feature walls between levels one and two. Textured aggregate cladding panels will be fitted to similar areas from ground level to level one.

The state-of-the-art building is on schedule for completion in July 2009 and will open in September 2009.