Weathering steel gets out of the block 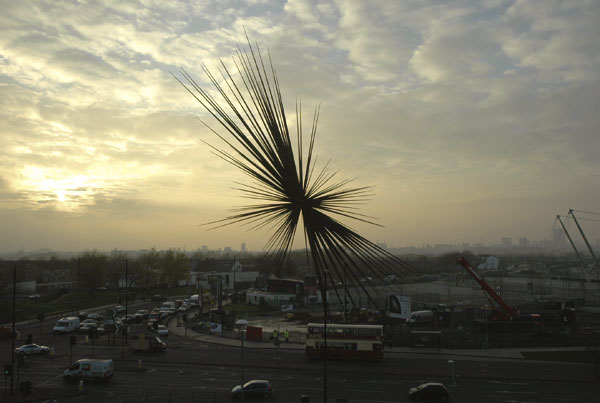 The UK’s biggest sculpture — Manchester’s B of the Bang — has been handed over to the client after a successful installation by principal steelwork contractor William Hare, and is due to be officially unveiled this month.

The 56m high sculpture was designed by Thomas Heatherwick in weathering steel and symbolises the burst of speed and energy of a sprinter launching out of the starting blocks. The name was inspired by athlete Linford Christie’s comment that he started his Olympic gold medal winning race on the B of the bang of the starter’s pistol.

It has been erected next to the City of Manchester Stadium, the main venue for the Commonwealth Games which the sculpture commemorates, and now the home of Manchester City Football Club.

The design, selected through a competition held by the New East Manchester  Regeneration Board, consists of 180 steel ‘spikes’ radiating out from a central point.

The sculpture consists of 3240 weathering steel plates welded to form 180 faceted tapering cones. “The steel was specified by the designer and provided by Corus as plate steel,” says William Hare Project Manager Dave Fish. “Each cone, or spike, goes into an 80t central core which is also welded pressed plate. The sculpture’s five legs are faceted as well, but clad with 3mm of weathering steel.”

Project structural engineer was Packman Lucas. Corus plate sales manager Paul Parkins says the popularity of weathering steel continues to grow among artists. “Designers are finding that weathering steel provides a pleasing finish and we are seeing an increase in demand for this steel for use in artistic and cultural projects.”