A number of challenges have been overcome to erect a steel-framed student accommodation scheme that shares a constrained site with a Grade-A listed church spire.

Known as the Triple Kirks, the project comprises three interlinked blocks (11, 12 and 13-storeys high), offering 337 en-suite accommodation units and ancillary facilities, that occupy a constrained site with a Grade-A listed church spire dating from the 1840s.

The spire once served three separate churches (kirks), hence the Triple Kirks name. These structures fell into disrepair a long time ago and, when developer Dandara purchased the site, only the protected spire remained.

Alongside the construction programme, restoration and refurbishment work is also being undertaken to the spire so that it will become a feature element within the completed development.

Initially planned as a Grade-A office building, changing market conditions led the landmark scheme to be changed into high-end student accommodation, helping to deliver a key element of the city’s new master plan – by providing the chance to live as well as work and study in the city centre. 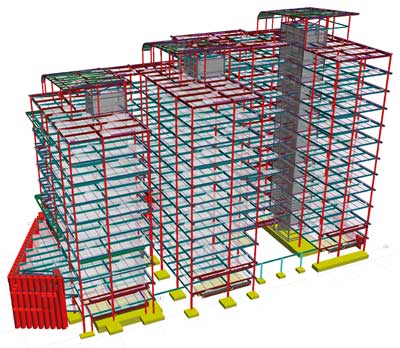 Model of the three accommodation blocks minus the spire 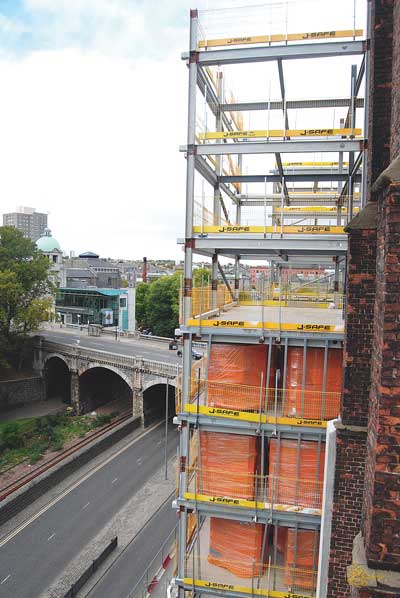 Different room sizes are located on each floor 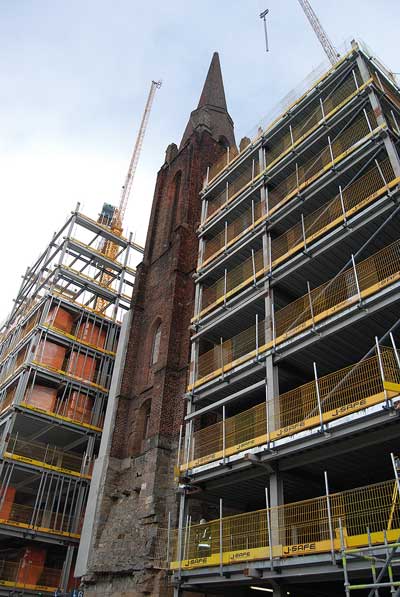 The project wraps around the historic spire

Dandara says the commercial property market remains strong in Aberdeen and it continues to invest heavily in commercial development throughout the region. Within the city core however the dynamic has changed.

The company adds that its flexibility and market-leading capability as a premium housebuilder allowed it to review the plans and re-approach this iconic site to deliver a development that will benefit the city.

The Triple Kirks’ apartments will regenerate the former religious site and fit seamlessly with Aberdeen City Council’s vision for the rejuvenation of the Denburn valley area. At the same time, it will deliver a vital boost in the availability of academic accommodation – as Aberdeen has been suffering from a critical shortfall for decades.

Explaining the design, Dandara Engineering Director Greg Kerwick says: “The project was always going to be steel-framed, whether an office or student accommodation. On a tight and constrained site like this steel has the advantage of being fabricated offsite. This results in far less material on the footprint as it is brought to site and erected immediately. It is also quick to erect which is something we like.”

Altering the design from a commercial office block to a residential building did however mean a rethink of the steel frame. The office was conceived as a braced frame, but the accommodation blocks’ design contains many more windows along each elevation, meaning there is no room for traditional cross bracing.

The solution was to install three jump-formed concrete cores, one for each of the conjoined blocks, and use these for the overall structural stability instead of bracing. Radiating out from the cores, the floors are then formed with a composite design using metal decking and a concrete topping supported on steel beams.

Prior to steelwork contractor EvadX starting on-site, Dandara had prepared the site by installing the concrete cores and pad foundations, demolishing some remaining church walls, and importantly constructing a 10m-high CFA piled retaining wall along three sides of the site’s footprint.

The site sits at the bottom of a slope with ground level access from the B986 dual carriageway, one lane of which has been closed to create a delivery yard. To the north and east of the site, Schoolhill and a smaller thoroughfare, Belmont Street, are actually 10m higher, with the former road becoming a viaduct as it crosses the dual carriageway below.

This means that what is essentially ground floor level is referred to as Level -3, with ground being the main entrance along Schoolhill.

How to support the retaining wall during the construction process was another challenging aspect of the scheme due to the confined nature of the plot. Once the steel frame, which ties into the wall for its three lowest levels, is complete, the wall has full support. Up until that point a series of 356UC steel props have been installed to support the wall. These large steel members are each absorbing approximately 2,000kN of load from the wall.

“There wasn’t room for hydraulic props, so using steel beams was the best option as the steel frame and floors can be built and cast around them,” says Mr Kerwick.

“Once the steel frame is erected the beams will be cut up and removed in pieces, with the holes in the floors then filled in.”

The steel frame totals 600t, but the piece count is very high, as there are no particularly long spans, with no beam longer than 6.5m. The grid pattern is also very irregular, as it has to encompass three different room sizes, all of which are present on each floor, as well as amenities such as a gym and reception area.

Typically, the design has a central corridor with accommodation units situated either side. Blocks one and two sit to the north of the spire and block three is positioned to the south. Two and three are linked via a narrow corridor structure that wraps behind the spire.

The new building never touches the spire, and open courtyards on either side of it allow natural light to penetrate the student units that face the retained feature.

“We used pretty much the entire footprint of the site for the new building, excluding the area around the spire, and consequently there was no room to position a mobile crane,” says Mr Kerwick. “All of the steel was erected via two luffing jib tower cranes which have been installed within the steel frame’s footprint.”

“Once the project nears completion the cranes will be dismantled and the gaps within the frame will be simply in-filled with metal decking, similar to the procedure necessary for the large props.”