Inclined façades dictate the use of steel 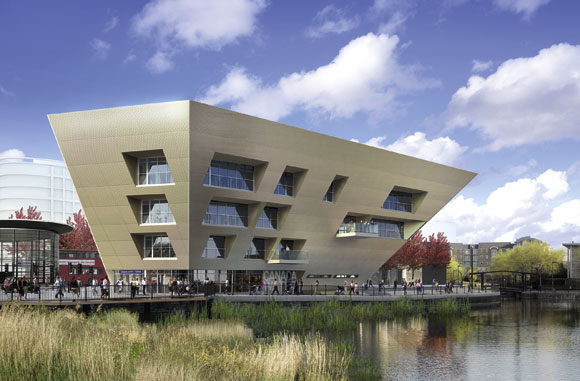 With four inclined elevations, Canada Water’s new architecturally driven library has made use of steel columns for flexibility and ease of construction.

A dramatic 2,500m2 library building is the latest development in what will become a new town centre for Canada Water in south London. Situated in Rotherhithe, in an area formerly known as Surrey Docks, Canada Water will eventually include 900 new homes, new retail outlets and a large civic plaza.

Central to this plan is the new library which is perched alongside Canada Water basin and even partly overhangs the water. The shape of the structure resembles an inverted pyramid, and in this way the available footprint has been maximised, while also lending itself to a stunning and visual shape.

Two facades of the building slope outwards at 50 degrees, and two others at 80 degrees. In this way, the four storey library gains approximately 6m of floorspace, all the way around the structure at the topmost level. 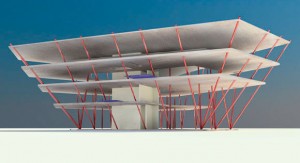 Model showing the importance of the inclined steel columns

To form this unusual structure, along with its extreme sloping façades, a series of raking steel columns have been installed around the building’s perimeter. The columns help form the cantilevers on each floor level, while a central concrete core provides the structure’s stability.

Steel columns were chosen for their buildabiity, as they require less temporary works than a concrete option.

The project’s concrete slabs have to be propped, so more temporary propping would have further hindered follow-on trades. The steel columns are all CHS members, used for aesthetic reasons as many of them will remain exposed as architectural features within the completed library.

Although the concrete floor slabs transfer the loads back to the centrally located core, it is the steelwork that knits the structure together.

“Steelwork holds the whole building together,” says Mick Paternoster, ISG Jackson Senior Site Manager. “Connected to the top of the steel rakers, forming the roof, there is a series of steel trusses which, along with the decking, tie everything back to the core.”

There are a total of 11 roof top steel trusses, all 3m deep and varying in length from 10.5m to 14.5m. The trusses form the desired open plan area, with no internal columns, for the upper library levels of the building. A lightweight concrete deck will be cast on top of the trusses, and this will support a plant area. 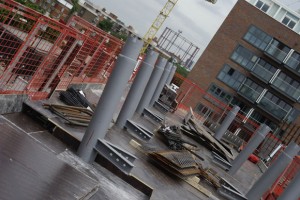 The structure’s shape has played a key role in how the construction programme has evolved. As each ascending floor cantilevers out more than the level below, each cast concrete deck is supported on temporary props, erected around the entire building. The temporary works must remain in place until all of the steelwork is erected, as only then will the structure have the necessary rigidity to stand alone.

The erection sequence has consequently been quite a tricky procedure as much of the steelwork has had to be inserted through the temporary works. Once the ground floor slab was cast the initial steel columns were erected. They were predominantly erected in storey high lengths, with cruciform connections cast into the floor slab above. This then allowed the next section to be bolted into place, and the next concrete deck to be cast.

“This meant a high degree of coordination was required on the project between the concrete and steelwork contractors. Once a concrete slab was completed, the steelwork was erected, which allowed concreting to begin again,” adds Mr Paternoster.

On the corners and along the most extreme 80 degree elevations, the steel columns are formed from two V-shaped members sprouting from one base member at ground floor level. From here three individual columns rise up through the structure, connected at each floor by cruciform connections.

However, some of the columns are of various configurations; with single piece columns, initially bolted into the ground floor slab and then erected in 12m long lengths. These members form the double-height performance area on the ground floor. Other single steel members – predominantly those that will remain exposed – have been erected in 7m lengths (one floor and a half). The concrete slab was then cast around these members and then another steel section was welded onto the protruding steel on the next level. 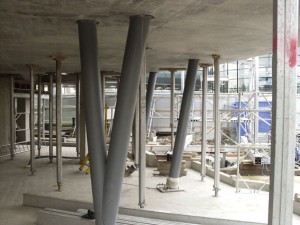 Within the four-storey structure a dominant feature is the full height atrium, containing a central spiral staircase travelling up the expanding shape. At ground floor level the building will contain – as well as a double-height performance area – meeting rooms and a main entrance. The first floor (which is smaller than the other levels as the performance area extends upwards to this level) will accommodate staff offices. Level three is the main library, while the fourth floor is a gallery level which wraps around all four sides of the building and overlooks the main library below.

ISG Jackson started on site during June 2009. The site is situated extremely close to Canada Water underground station which is on the opposite side of Surrey Quays Road. One of the station’s entrance/exit points is actually on the site, and has been sealed up temporarily, to be reinstated once the project is complete. This entrance/exit will be incorporated into the new structure and consequently it takes up some of the ground floor footprint.

Summing up, Architect Piers Gough says: “When completed, it will be a great addition to this area of Southwark. The community will have a lovely place and resource to explore, read, learn, meet, be creative in and generally make their own.”

The project is scheduled for completion in June 2011. 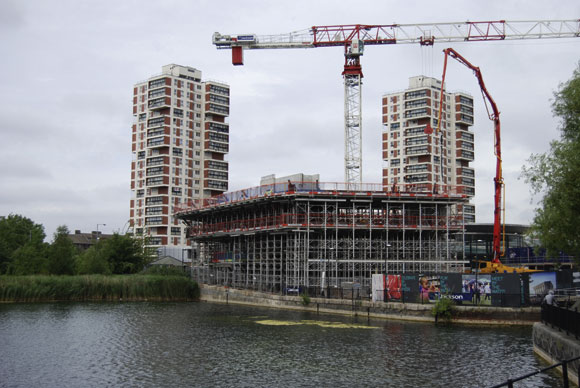 Already awash with temporary works for the concreting, the use of steel columns meant no more propping was needed on site