Hull city centre gets a make-over 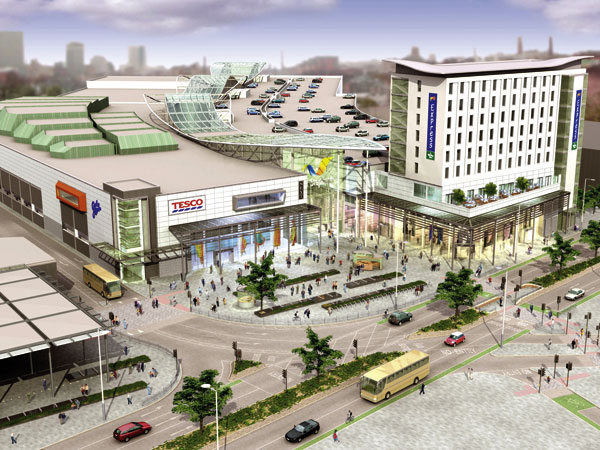 Steel is playing an important role in Kingston-upon-Hull’s on-going city-centre regeneration scheme. Overall known as St Stephen’s, the £160M retail and leisure development is the second largest mixed-use project in the UK and has been designed by a team including Foster & Partners and Wilkinson Eyre.

Located on a 40-acre site, the project will include: a a new state-of-the-art transport interchange; more than 30 retail stores; a Tesco superstore; an 80-bed hotel, 220 new homes and a new home for the Albemarle Music Centre.

According to Jaime Greenock, Project Manager for steelwork contractor Bone Steel, it has been the Albemarle building which has been the most challenging aspect of the project so far for his team.

“The steel-framed structure is oval-shaped and consequently needed 14 skewed columns,” Mr Greenock says. “They couldn’t be conventionally bolted to plates because they’d just fall over, so we had to tie them together with cross-members using a frame.”

Bone Steel has been on site since July and is supplying and erecting 1,700t of structural steelwork for the entire project.

Approximately 700t will be used for the Tesco superstore which is a one-storey steel-framed structure covering 10,000m². Another large steel element – requiring nearly 400t – is the eight-storey hotel building which will sit on top of a concrete multi-storey car park.

Mr Greenock adds a further 300t of steel will be supplied for the upper and roof level of the shopping centre, while more than one-mile of shop front steel will also be erected.