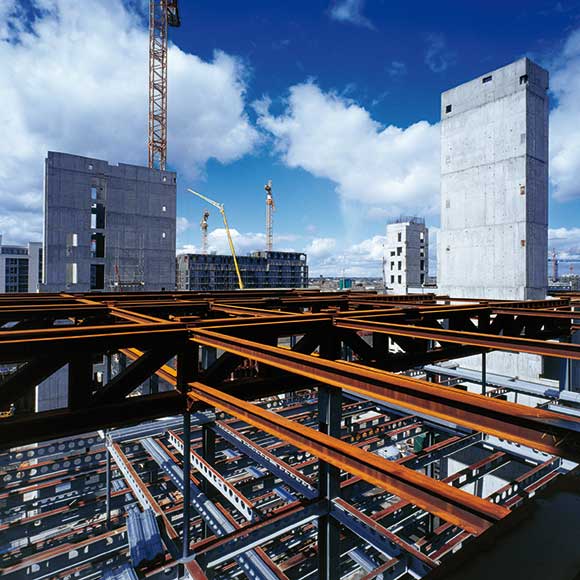 A new cultural and business quarter is rapidly taking shape on the banks of the River Liffey in Dublin’s Docklands. Martin Cooper reports from a project making the most of steel’s flexibility and spanning qualities.

The centre and cultural heartbeat of Dublin is gradually moving eastwards along the River Liffey, from the old city centre to the fast-changing Docklands area.

Large areas of this underused portion of Dublin are being redeveloped, with a number of cultural, residential and commercial projects well underway. A forest of tower cranes among the old warehouses indicates that construction activity is rampant and one project, a large mixed-use scheme known as the Point Village, will act as a focal point for the entire development. 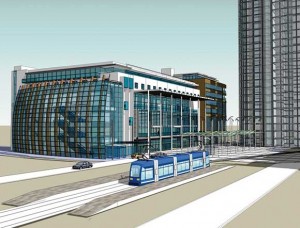 Point Village is huge and is centred around a large open plaza. It will include a shopping centre with 27,000m² of retail space, a four-star hotel, 200 apartments, offices, a cinema complex, conference centre and underground car parking for more than 1,000 cars. All of this requires approximately 15,000t of structural steelwork which is being erected by Fisher Engineering.

The development also includes the ‘Watchtower’ a concrete 32-storey residential tower, which will be Ireland’s tallest building at 100m-high. Adjoining Point Village an expanded and rebuilt Point Depot, the city’s premier live entertainment venue is also under construction. 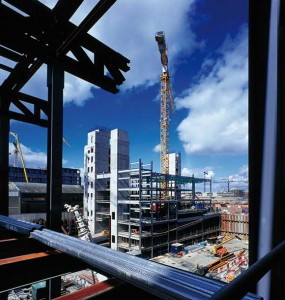 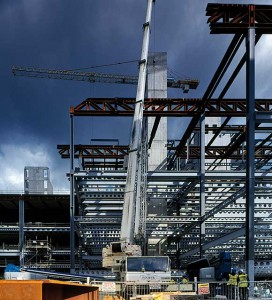 The lower levels of the project are predominantly retail, changing to office space above level three

Getting to and from the Point Village from downtown will not be a problem as the project’s large central plaza, which also adjoins the adjacent venue, will contain a new terminus and extension of the LUAS Dublin light rail system. A vast array of restaurants and shops will also draw people in and encourage them to stick around after concerts or even choose to visit the development for their weekly shopping expeditions.

Previously the site was occupied by the Point Depot’s car park and as that structure is currently under redevelopment (under a separate contract to Point Village) a large plot became vacant and prime for construction.

The site measures approximately 150m x 200m, and the entire footprint was initially dug out to 10m below ground level. To shore up the site and make it watertight steel sheet piles were installed around the footprint’s perimeter.

Interestingly, these steel sheet piles have become structurally integral to the job as they are permanent fixtures and the project’s steel frame is attached to them. This methodology has given the project maximum use of available space and proven to be more efficient than alternative methods.

“The majority of the project is being built with a steel frame and by including the sheet piles into the structural frame we’ve probably gained a metre all the way around the perimeter,” explains Mr Dillon.

The majority of the dug out area consists of the site’s three basement levels which is primarily taken up by car parking. The client wanted as few a columns as possible in the car park, to enhance the customer experience by allowing slightly larger vehicle spaces than normal and generally make parking easy.

These lower levels of the project are predominantly constructed around a large 16m x 8m grid and this was one of the principle reasons why steel was chosen as the framing material for the entire Point Village project.

“We wanted some large spans in the lower areas and this suits steel,” explains Martin McGrath, Director of project engineer O’Connor Sutton Cronin. “We looked at all available materials and steel was chosen primarily for its ease of erection as well as the required spans.” 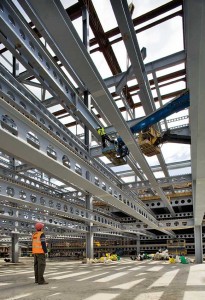 The large grid pattern also easily accommodates the project’s underground loading bay which is located on basement level -2. “Trucks entering the loading area need a large space in which to turn around and this grid pattern allows for this,” adds Mr McGrath.

The flexibility of the large grid pattern also means the project’s anchor department store, Dunnes Stores, will also have one of its retail levels at basement level -1.

Once the enabling works and piling programme had been completed, the project’s 13 concrete cores were constructed and the basement slab was cast. This then allowed Fisher to begin steel erection during October 2007.

“We’re erecting the frame up to level 3 with 80t mobile cranes working off of the slab, while the higher floors are to be erected by tower crane using cherry-pickers working off level 3 slab for access,” explains Fisher’s Site Manager Richard Grey.

Filling in such a large area with a steel frame presented a few structural challenges and each of the four quarters of the site is essentially a stand-alone structure. The sheet piles are also propped and the steel erectors have had the tricky job of working around these temporary works. The props are only removed once the connecting steel frame and composite floors have reached the ground floor level. 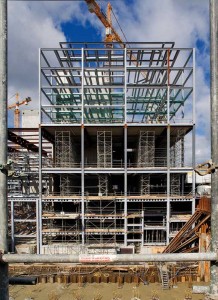 Steel erection has utilised a combination of tower and mobile cranes

The majority of the steelwork frame is a stick and beam configuration, however supporting the plaza area did require some of the project’s largest and heaviest steel members.

“By keeping the same spans beneath the plaza zone we had to use some large 1,100mm deep sections weighing approximately 5t each,” says Mr Grey. “The loads from above were increased in this area because of the infrastructure associated with the tram terminus in the plaza.”

From ground floor to third floor level the Point Village project is predominantly retail. However, from here to the uppermost level (seven or eight, depending on which zone) the structure is taken up with office space, apartments and a hotel.

The steel framed grid pattern changes here to a smaller 8m x 8m grid, and this required the installation of a series of large trusses. The trusses were brought to site as complete sections and are up to 18m long and 2m deep.

“Non retail units need smaller spans and so the trusses support the floors above and the extra column lines,” explains Mr McGrath. “And, importantly the trusses also house all the services from above within their depth.”

Consequently, the trusses are not only structurally important, they also create a service void between levels three and four. This space accommodates the enormous amount of services generated by a hotel, offices and residential units.

Other notable steel features of Point Village include a large and impressive glass clad atrium adjoining the central plaza. This will house elevators and lifts able to whisk guests directly up to the project’s hotel lobby situated on the fourth floor.

Steelwork is due to be complete by October this year and the entire project is scheduled for completion by 2010. 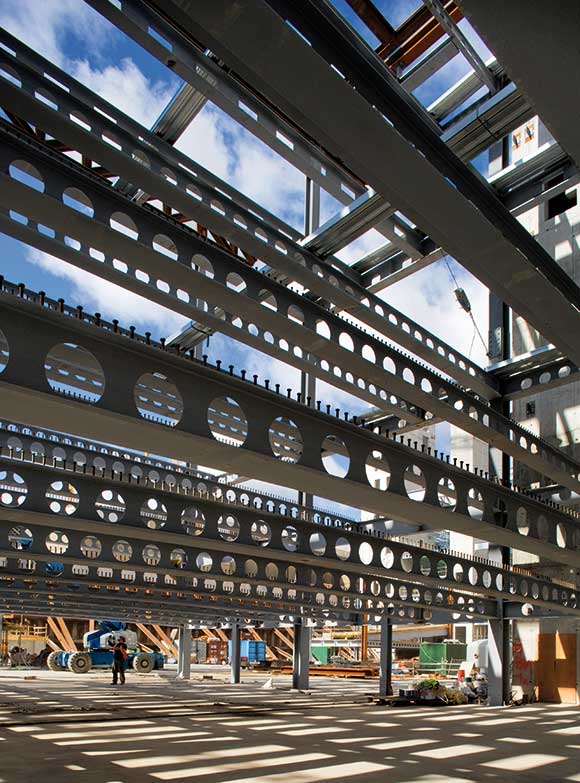